Days Before the Election, Mayoral Candidates Speak on LGBTQ Issues at Town Hall 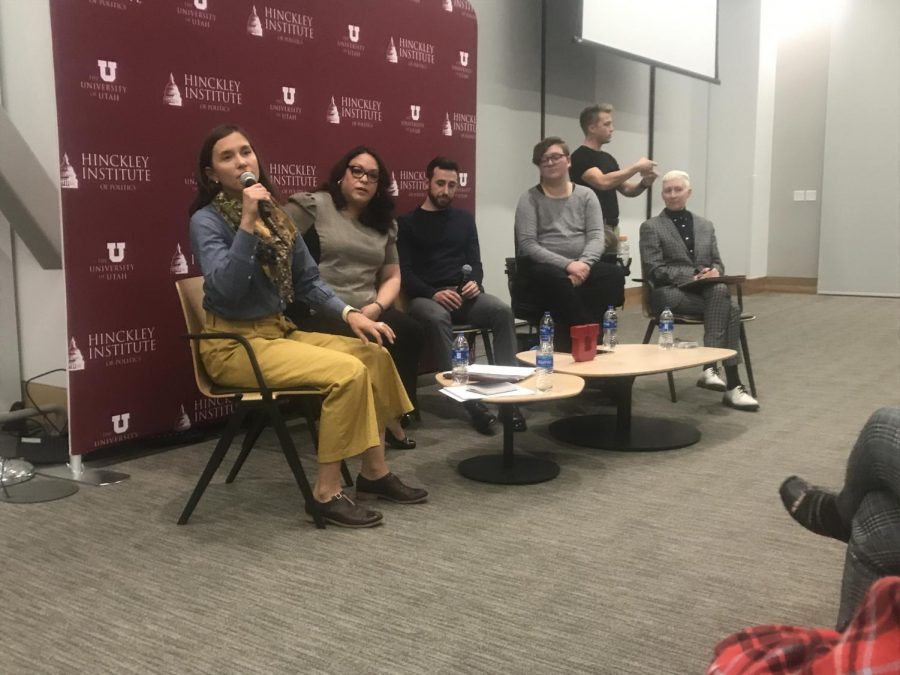 The Mayoral Town Hall was hosted on Oct. 28 at The Hinckley Institute. ((Photo by Miacel Spotted Elk | The Daily Utah Chronicle)

On Monday evening at The Hinckley Institute, mayoral candidates Luz Escamilla and Erin Mendenhall spoke on issues pertaining to Salt Lake’s LGBTQ community, with only days left until the general election.

Hosted by The LGBT Resource Center and The Hinckley Institute, the event was moderated by Cody Carlson Craig, Jain Miner and Kathryn Stockton. Questions regarding homeless youth, high death rates of transgender women of color and conversion therapy were some of the many of the issues touched.

Compared to two previous public forums these past weeks, the moderate turnout was a split between young and middle-aged audience members. According to Mendenhall, this is the 14th debate she and her opponent have attended for both the city’s primary and general races.

In the opening statements, both candidates promised to continue the vitality of Salt Lake and promote an inclusive environment for communities—especially for those who identify as LGBTQ. Mendenhall has been on the city council for six years and Escamilla, a state senator, has held her post since 2009.

“I’m passionate about what Salt Lake City can do and I know what our tools are,” Mendenhall said. “I’ve been using them for six years on the council and I’m hoping to earn your vote tonight to be our next mayor,” Escamilla spoke about her background, discussing her time as a master’s student at the U, her work former Governor Jon Huntsman’s office and her upbringing as an immigrant. She has called Utah home for more than 20 years.

When asked what steps each candidate would do in their administration, Mendenhall vows to provide “the four pillars of trans healthcare” as accessible for city employees and all of their dependents.

Sharing the story of her brother coming out, Escamilla said she offered unwavering support to the LGBTQ community and promised to continue defending communities who have faced discrimination. She said her campaign “Is really about inclusiveness and making sure that we are addressing [issues] from a systemic place,” she said.

Craig also asked the candidates how they would address the high amount of homeless youth that identify as LGBTQ.

“I think it’s time that the VOA (Volunteers of America) and the community come back to the table to talk about the needs of homeless youth,” Mendenhall said. Mendenhall pointed out The Youth Resource Center, is located on Harvey Milk Boulevard, named after the influential gay rights late-activist. In the city council, Mendenhall pushed for the creation of the recently-opened Women’s Homeless Center, and she suggested expanding the Youth Resource Center to accommodate more youth.

Escamilla credits the passage of a bill she co-sponsored, Consent to Services for Homeless Youth, to illustrate her commitment to improving homeless services for LGBTQ youth. The bill aims to protect vulnerable communities who are young to be admitted into a shelter without penalty as a minor. “Many youths were running away from homes that were being abusive,” she said.

One of the most controversial issues in Utah, conversion therapy, was also discussed. The practice claims to change the sexual orientation of an individual to heterosexual. “We have to make conversion therapy no longer legal to practice in the state of Utah,” Mendenhall said. “And in order to make that change, it’s going to take all of us standing together at the state level.” Escamilla agrees and finds the practice “inhumane.”

Stockton raised the concern for the ubiquity of violence against transgender women of color throughout the country to the candidates—asking the candidates what their initiatives will do to tackle this epidemic.

Escamilla presented her commitment as an ally through her work as a legislator during the session earlier this year. Co-sponsoring a resolution with Rep. Angela Romero, she created a day on May 5 to honor LGBT communities alongside an awareness of the Missing and Murdered Indigenous Women movement. “We will be continuing to work on this,” she said.  “More importantly, it addresses the issue of data.”

“Really what it comes down to is what a city can do, there is a good deal of training that we can do through our public safety officers,” Mendenhall said. By introducing and maintaining “cultural sensitivity training, de-escalation training and cultural bias training” to public safety departments, Mendenhall is confident that local police officers will be able to better assist this community.

The event ended with both candidates giving their closing statements.

“Think about growth investment like the dough and you’re going to be bread,” Mendenhall said. “we got to get our hands on this dough and shape it into the best possible outcome we can afford to make this time.”

Escamilla, if elected mayor, envisions a “Salt Lake City that is inclusive, well-managed, open for people to feel safe and feel that there’s someone that they can talk to and be represented.”

To register to vote, visit this site for more information.