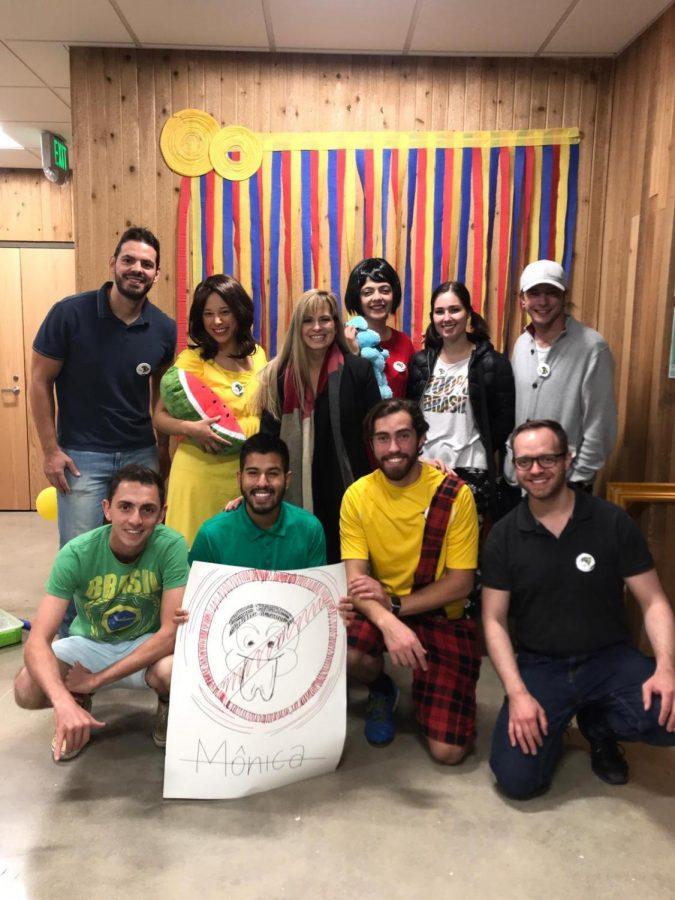 The corridor of the A. Ray Olpin University Union is decorated with flags of different countries that symbolize the nationalities of all students and faculty at the University of Utah. One of those flags is the bright green, yellow and blue flag of Brazil — a country with a rich and vibrant history, the fifth largest country in the world, but one that has had little student organization representation at the U until now.

This is the first year of the Brazilian Club at the U. The club’s goal is to “preserve and share Brazilian culture and Portuguese language within the University of Utah,” said the club’s president, Ingrid Pollyanna da Silva Braga.

“We hope to promote friendship and cross-cultural understanding between members and to share a passion for Brazilian culture,” Braga said. One of the ways the Brazilian Club is promoting and sharing Brazilian culture is by hosting weekly “bate-papos” (roughly translated as casual conversation). There are themes to these bate-papos, which include discussions on Brazilian music, literature and movies. There are Portuguese language tables for anyone in the U community “who speaks Portuguese at any level of proficiency” or “who might be interested in getting started,” Braga said.

One of the club’s most recent events was a celebration of Children’s Day, which is a Brazilian national holiday. The Brazilian Club partnered with the Brazilian Cultural Center, or “Centro Cultural Brasileiro,” and the Consulate General of Brazil in Los Angeles, to show a movie in the popular Brazilian franchise, “Turma da Mônica,” which translates to “Monica’s Gang.” Braga explained that “Turma da Mônica” is a children’s comic that started in the 60s and is still around today, it remains just “as popular in Brazil as ‘Peanuts’ is in the United States.”

“The movie was played to over two hundred people in attendance,” Braga said. “Some of the Brazilian club members dressed up as characters of “Turma da Mônica” and the children had a great time taking photos with [them] and talking to their favorite characters,” Braga continued.

The U strives for cultural representation, and the importance of having a Brazilian club on campus is not lost to the Brazilian Club faculty advisor, Anna Pavlova Murta Hodgson. “The club gives Portuguese and Brazilian students the opportunity to practice the language in a fun, informal setting, take on leadership roles and improve their resumes, make new friends and give back to the community by organizing events in which they share what the learn at the U.”

They are also constructing a safe learning environment by having students that are just learning how to speak Portuguese improve their skills by being around Portuguese-speaking students. Hodgson mentioned that two of her first-time Portuguese students volunteered at the Brazilian Club’s Children’s Day event.

“They have the opportunity to practice Portuguese with native speakers, learn new words in context, improve their listening, learn about the culture and have fun. They make a lot of new friends and feel part of a ‘student tribe’ and participate in giving back to the larger Brazilian community in Utah,” Hodgson said.

“My favorite thing has definitely been the people. It has been amazing to see the commitment of our organization members who have been working together to make sure that we offer the campus community the best opportunity to experience Brazilian culture,” Braga said. “We want to be a welcoming space for people to learn about, experience and engage with Brazilian culture.”

As for what the club would like to see in the future, Hodgson said, “I firmly believe that the club can greatly expand Portuguese studies and Portuguese-related studies programs at the U.” She said she’d also like to see “the prospect of seeing the connections made and experienced gained in the club, turn into lifelong friendships and career or business opportunities for the students involved in the club now.”

“We know that it may take some time before we can grow our membership,” Braga said. But that is not stopping the club, currently consisting of only nine members, from sharing their love for the Brazilian and Portuguese culture. “We want students to know that everyone is welcome to be a part of the organization and that we are committed to creating a sense of community and belonging among our members.”

The Brazilian club has more events planned in order to bring more Brazilian culture to the U and is currently in the process of planning a Brazilian dance class on Nov. 7. The club will also be hosting a Brazilian cooking class with two Brazilian chefs who will teach how to prepare traditional Brazilian meals.

The Brazilian club encourages those who are interested in joining them or coming to future events to follow the club’s Instagram page (@brazilianclubuofu) and Facebook page to find out more about updated dates and locations of the events.

An earlier version of this article misstated the date of the Brazilian dance class. It will be held on Nov. 7, not Dec. 2.