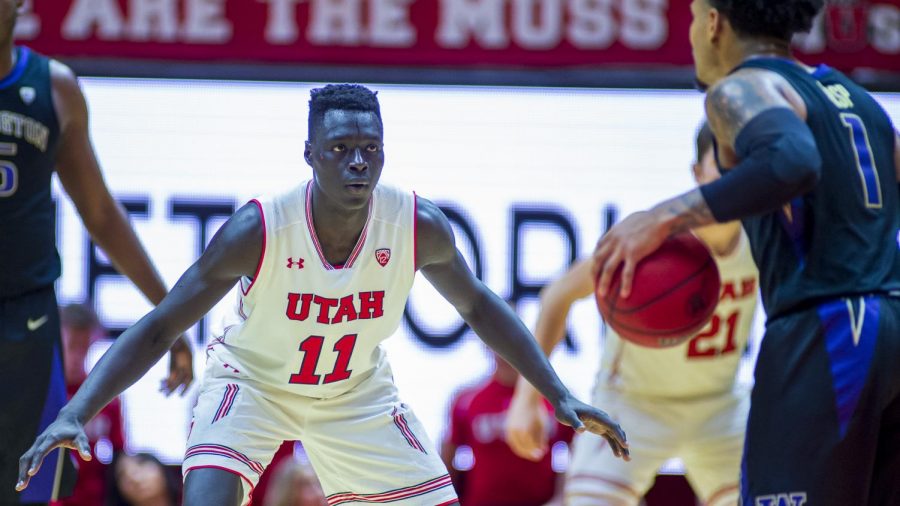 The University of Utah men’s basketball team kicked off the 2019-2020 season against the UT Tyler Patriots on Wednesday night.

Recap
The crowd may have been sparse, but the excitement for the start of the 2019 men’s basketball season was palpable as the Runnin’ Utes took the floor for the first time this season. Although the youth of the team showed as the cobwebs were dusted off, the freshman made some solid plays early on, shooting 5-18 and 1-7 from 3-point range mid-way through the first half.

Utah’s first bucket of the year came from freshman Branden Carlson to put the Utes up 2-0 to start the game. Matt Van Komen, Utah’s 7’4″ center, got his first of 2 blocks on the night only four minutes later, sending a 3-point attempt from UT Tyler backward. Mikael Jantunen showed spurts of offensive prowess, scorching the net for 12 points. Rylan Jones showed vision, drawing multiple fouls alongside a few great passes to reach 3 assists by the end of the game.

The leadership on the team came from Riley Battin, Both Gach and Timmy Allen, who combined to score 23 of the first 25 points of the season. These three tallied 40 points, 23 rebounds and 6 assists to help lead the Utes.

“We had a balanced attack,” Battin said after the game. “Some guys had their feet wet with their college basketball experience and it was a good team win tonight.”

The highlight of the night was on a fast break when Brendan Wenzel dished off a pass to Carlson who slammed it home to put the Utes up 61-36 with just over nine minutes left in the second half.

Utah kept control through the remainder of the game, scoring 50 points in the second half to notch their first win of the season. The Utes took down the Patriots by a score of 88-47.

Gach led the Utes in scoring with 15 points, while Jones and Battin led the Utes in assists with 3 each. It was a team affair, as three players combined to top the rebound charts for the Runnin’ Utes with 9 each.

After the game, Head Coach Larry Krystkowiak said, “I liked the energy of the guys, I thought we played hard and shared the ball. I think we had 4 turnovers in the first half, so we took care of the ball, played hard, and got out in transition. In the second half, the field goal percentage significantly rose, and we were able to run and free our minds.”

Next Week’s Matchups
The Runnin’ Utes will travel to Reno, Nevada to take on the Nevada Wolfpack on Tuesday, Nov. 5, 2019, at 8:30 p.m. The game against the Wolfpack will be broadcast on CBS Sports.

Utah will then be back at home on Friday, November 8, 2019, to take on the Mississippi Valley State Delta Devils. Game three on the season will tip-off at 7 p.m. and be televised on Pac-12 Networks.

Last Season’s Nevada Wolfpack
Nevada got off to a scorching start, winning 14 games before their first loss took place in 2018. During this time, the Wolfpack climbed the rankings and were ranked as high as fifth in the nation at one point. Nevada made the March Madness Tournament as a seven seed but was upset by the 1oth-seeded Florida Gators in the first round.

Nevada Players to Watch Out For
Jazz Johnson, a senior on this year’s Nevada Wolfpack squad, averaged 11 points per game last season while shooting forty-45 % from 3-point range. Johnson was the Mountain West Conference sixth man of the year in 2018 and is looking to solidify a starting spot in 2019.

Nisre Zouzoua is another returning member of the 2018 team. Zouzoua averaged 2 points in six minutes of playing time per game. Watch for these numbers to go up as Zouzoua is entering his senior season.

Mississippi Valley State Players to Watch Out For
Senior Michael Green will lead the way for the Delta Devils after being the highest returning scorer from last season’s team. He appeared in 27 games last season and averaged 7 points per game.

Torico Simmons will be another Senior member of Mississippi Valley State to watch out for this season. He played in every game in the 2018-2019 season and averaged just over four points per game. His presence will mainly be felt on the boards after averaging two rebounds per game last season.