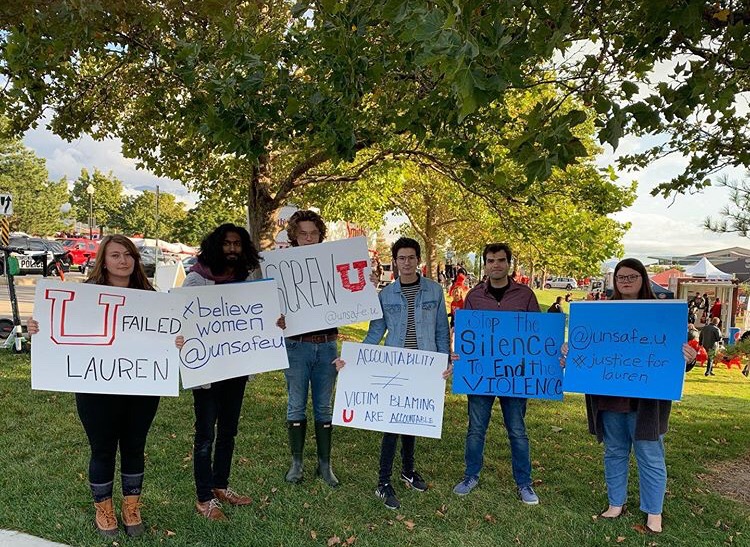 Students protest before the U football game on Sept. 28 (Courtesy Unsafe.U)

The University of Utah’s motion to dismiss in the Lauren McCluskey lawsuit has inspired widespread action for many students on campus. So far, students have created the @Unsafe.U Instagram account, demanded to speak with the U’s President Ruth Watkins and even walked out of class to protest the U’s handling of safety concerns. Many cases where students’ concerns have been ignored were presented by women. McCluskey reached out to campus police more than 20 times before she was murdered.

SafeU month comes to a close at the end of October, but this hasn’t dissuaded students or staff members on campus from wanting to continue the current dialogue of safety, especially with issues of gender and diversity being featured front and center amidst the McCluskey lawsuit.

“As we know, race, ethnicity, gender, sexuality and many other intersections of identity can influence the safety of an individual or a community,” said student body president AnnaMarie Barnes. “I believe there needs to be more resources and discussion about safety in relation to women, students of color and students that identify as LGBTQIA+, especially as we move forward in creating a culture of safety on campus.”

Barnes has acknowledged the frustration on campus, yet remains optimistic that student voices are being heard and changes truly are being made.

“Students have been on the [SafeU] planning committee since its inception and have had meaningful direction, input, and authority on the committee,” she said. “Members of ASUU and I are constantly listening to students. We are listening to what they say on social media, in our classes or directly to us about campus safety.”

“I would say that from the perspective of professional staff, we are all striving continuously to do better to serve students and minorities of diverse identities,” said Dr. Clare Lemke, the director of the LGBT Resource Center. Lemke shares a similar sentiment to Barnes, and she feels representation is king in the conversation of campus safety. “How are we talking about safety throughout the year? How are are we talking about how safety impacts queer and LGBT people of color, queer and LGBT people with disabilities?” she asked.

Lemke felt that SafeU has been important in continuing the dialogue of campus safety. “October 1st doesn’t mean that we weren’t talking about safety before, and November 1st doesn’t mean we’re going to stop talking about safety after,” she said. She said that staff members within the LGBT Resource Center had committed to staff training that was related to SafeU Month, although members of the Resource Center itself are not part of the SafeU Planning Committee. This has led to something of a disconnect in the ongoing conversation of safety, outlining what she feels is one of the larger problems when it comes to the U’s decision making. “I think I can speak for our staff that speaking about safety and violence prevention is definitely a value in the program we do,” said Lemke. “[However,] especially as someone new on this campus, there have been a ton of communication difficulties.”

Barnes shared similar thoughts to Lemke. She said that students have been active participants throughout SafeU Month, and while many have already had their voices heard, the signs of attentiveness have gone unheard by many. “I believe [our efforts] have been visible. However, it is difficult to communicate such a nuanced message to a campus of this size,” said Barnes. “The SafeU Planning Committee has been receptive to all feedback and hopes to continually improve.”

Barnes feels strongly that students’ feelings and concerns are being taken seriously and acted upon, but she acknowledges that there’s still much work to be done to create a safer campus. “ASUU has launched a campaign to gather more student feedback on campus safety,” she said. “Although ASUU and many other students at large have been voicing concerns to the university administration, we know there is much more work to be done and more students we need to hear from on this issue.”