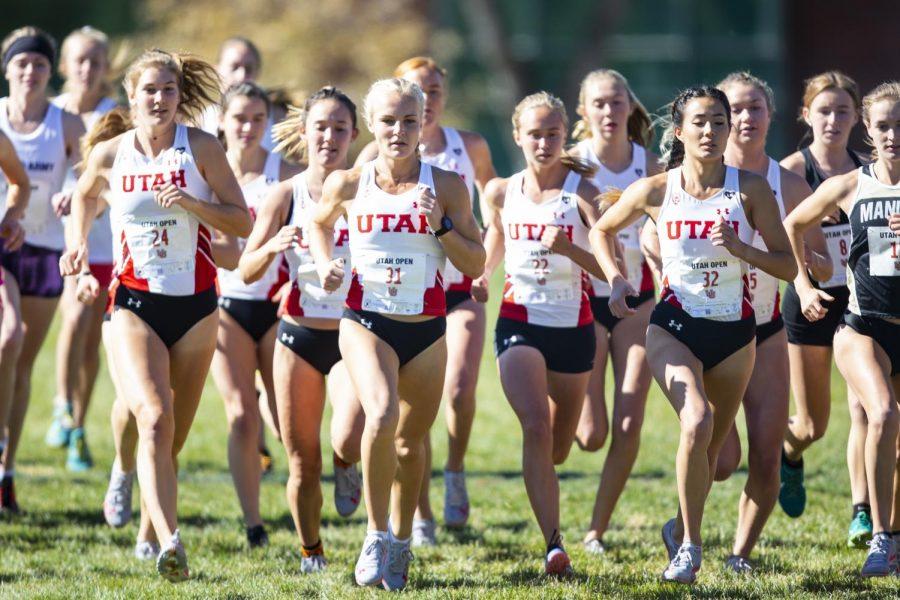 The University of Utah Cross Country Team during the Women's 5K run at the Utah Open in an NCAA Cross Country Meet at Sunnyside Park in Salt Lake City, UT on Friday October 25, 2019.(Photo by Curtis Lin | Daily Utah Chronicle)

The University of Utah Cross Country team is set to compete in the Pac-12 Championships this Friday in Monmouth, Oregon, at the Ash Creek Preserve course. The Utes were ranked No. 16 heading into last Friday’s meet held in Salt Lake City and will be hoping to cap off a good season with high placement at the tournament. The race will be broadcast on the Pac-12 Network at 1 p.m. MST.

The Oregon women are the defending champions heading into this week. Oregon is currently ranked No. 20 in the nation, placing them behind Utah. Stanford is currently No. 2, Washington is No. 3 and Colorado is No. 5.

Ash Creek Preserve is the first dedicated Cross Country course to host the Conference’s championship meet. Considering that last week was possibly the last week of good weather we’ll have for the year, this is undoubtedly a good thing.

The Stanford women are considered favorites heading into the championship after their terrific play finishing runner-up at the Nuttycombe Wisconsin Invitational to top-ranked Arkansas. At the loaded Pre-National Invitational in Terre Haute, Indiana, Washington finished first, jumping to No. 3 and ahead of Colorado, who placed third at the event.

The Pac-12’s combined top ranked teams are the most of any conference and nearly double the next closest league, which is the Big Ten. This fall, the Pac-12 has the chance of becoming the most successful conference in NCAA Cross Country history.

Coming into the championships, Utah has been led by a variety of runners, most recently freshman Grace Burnett. At the Nuttycombe Invitational, the top times belonged to juniors Poppy Tank and Bella Williams, who crossed the finish line together. They were followed by Sarah Feeny, Cara Woolnough, and Trina Moreno. Emma Christensen and Kennedy Powell finished things up for the Utes.

Most recently at the Utah Open, freshman Grace Burnett started toward the rear but ended up finishing first for the Utes and third overall with a time of 18:57.1. This was another impressive performance from an athlete who is already establishing herself as one of the best. Burnett is a local from Skyline High School in Salt Lake City.

Karli Branch came in next for the Utes with a time of 19:25.3 to finish 10th overall. Branch is another freshman from Corner Canyon High School in Draper. Nicole Griffiths, Sara Leonard and Kaitlyn Mercer crossed the line together to round out last week’s scoring runners.

With a variety of young athletes running extraordinarily well toward the end of the season, it should come as no surprise that the Utes are enthusiastic about prospects and about how well we can play against other in conference foes during the Pac-12 Championships.

The Utes are hopeful moving into the tournament and fans should be as well. Be sure to watch the tournament on the Pac-12 Network and to cheer on our Utes from Oregon if you’re there. It’s been a great season, and one that looks to be a catalyst in the future of Utah Cross Country.