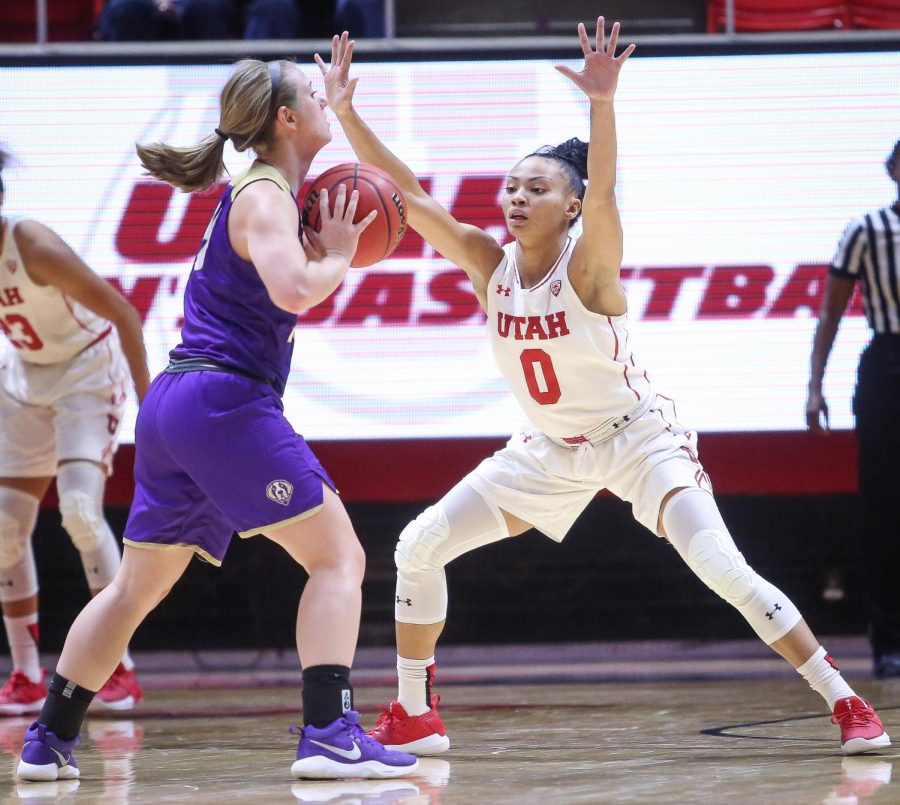 The University of Utah Women’s Basketball Team won an exhibition game against Westminster College Thursday at the Jon M. Huntsman Center. In front of a crowd of over 6,000 screaming kids from area elementary schools for the Utes’ annual “Future Scholars” day, Utah ran away with a big 88-58 victory over the Griffins, putting on a show for their loud, young fans.

“For my first year it was crazy, it was so loud when we walked out,” said freshman Brynna Maxwell. “The atmosphere is crazy. They were so loud, so energetic. You could totally feel it in the game when we started to go on a run and the crowd started getting into it. It was really fun.”

“It’s not a secret formula that the teams that win and get on the national map, have a fan base behind them. We’re getting there. It’s been fun to see that grow over the four years that I’ve been here.”

Hot Shooting Utes
The Utes got off to a slow start and did not have a lead until Lola Pendande made a layup with 5:48 left in the first quarter, giving the Utes an 11-9 lead that they never relinquished.

The Utes’ hot shooting and rebounding advantage propelled them to a big win. Utah shot 33/60 (55%) from the field, 9/22 (40.9%) from beyond the arc and had a rebounding advantage of 21, outrebounding the Griffins 44-23. The Utes boasted a balanced scoring attack. All 11 of the Utes who played Thursday scored at least 2 points, with Pendande, Maxwell, Niyah Becker, and Maurane Corbin all scoring double figures.

Newcomers Dazzle Home Crowd
The debutantes impressed in their first game suiting up for the Utes. Pendande, a freshman, scored 12 points on a perfect 6/6 shooting and added 4 rebounds and 2 steals. Maxwell, a fellow freshman, scored 15 points, including 3 3-pointers. and shot 50% from the field. Junior transfer Julie Brosseau scored 6 points and led the Utes with 5 assists.

Freshman Kemery Martín led the Utes in minutes played and tallied 8 points, 3 rebounds and 3 assists. Junior transfer Ola Makurat also played a big role for the Utes scoring 6 points and pulling down 6 rebounds. Sophomore Aubri Noti added 2 points and 2 rebounds in less than 7 minutes of playing time. When asked about the play of the freshmen, Roberts said simply: “they produce.”

Invaluable Experience
Roberts limited the playing time of some of Utah’s more established players to get the younger or newer players some game experience. Sophomore point guard Dru Gylten had an impressive game in a limited role, filling the stat sheet with 2 points, 3 rebounds, a team-leading 5 assists, 1 block and 3 steals. Moore added 7 points. Sophomore Andrea Torres impressed, connecting on both of her 3-point attempts, finishing with 9 points and 4 rebounds. Becker and Corbin, both sophomores, both had a solid showing for the Utes as well. Becker scored 11 points while snagging 5 rebounds and Corbin added 10 points and pulled down a team-high 7 rebounds.

Coming up for the Utes
The Utes will officially tip off the season next week as they travel to Cincinnati to take on the Cincinnati Bearcats on Tuesday, Nov. 5, 2019, and the Xavier Musketeers on Thursday, Nov. 7, 2019.  Tip-off for both games is at 5 p.m. The first home game of the season will be on Saturday, Nov. 16, at the Huntsman Center as the Utes will welcome in the South Dakota Coyotes.