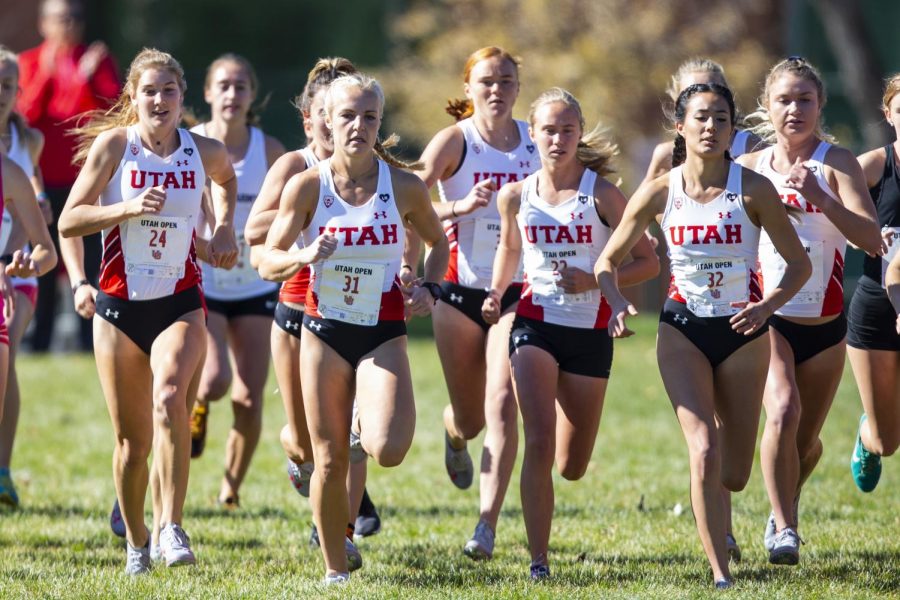 The University of Utah Cross Country Team during the Women's 5K run at the Utah Open in an NCAA Cross Country Meet at Sunnyside Park in Salt Lake City, UT on Friday October 25, 2019. (Photo by Curtis Lin | Daily Utah Chronicle)

The University of Utah Women’s Cross-Country team had their highest Pac-12 Championship finish in program history, placing third, just behind the favored Stanford Cardinal and the Washington Huskies. It was a big day for Poppy Tank, Bella Williams and Sarah Feeny. The Utes are excited to continue moving forward after a historically good day at the championships.

The trio of Tank, Williams and Feeny all finished in the top ten, earning high praise from Head Coach Kyle Kepler.

“Big day for our program and it was the best finish in program history since entering the Pac-12,” Kepler said. “To see three Utes in that picture of the top-10 is really gratifying for how far this program has come and hopefully where we are headed.”

The other two scores that rounded out the final for the Utes were Cara Woolnough and Trina Moreno. Woolnough finished in 27th and Moreno 38th.

Stanford, the favorite to win, ended up in first place and Washington finished second. The Utes beat the Colorado Buffaloes, who were ranked No. 5 in the nation, in a big upset.

“Overall, I couldn’t be more proud of pleased with this group,” said Kepler.  “They ran their guts out today. We had about a 15 point deficit in the last mile that we made up and we were able to sneak into third. I’m just really pleased — they did the work and it’s a fun group to be a part of. There’s a lot of self-belief and a lot of belief in each other and I couldn’t be more proud.”

Coach Kepler was the not the only one to mention the strong bond shared by this year’s team. “We’ve all gotten really close really fast. I feel like I’ve known them for a really long time, not just a few months,” said true freshman Grace Burnett. “The bond really helps us, especially during the races because we talk to each other during the races. Even when one of us isn’t racing, we still watch our teammates, and it builds our confidence as a team.”

That type of bond helped the Utes to put up some good numbers during the championships. Tank finished with a time of 19:49.6. Williams ran a new personal best of 19:50.6. Feeny earned 10th place overall and a new personal best time of 19:55.3. Scarlet Dale, Ellie Lundgreen and Emma Christensen all also earned new 6k PRs for the Utes.

“The Pac-12 is the best distance conference in the country,” Kepler said. “We want to compete the way we know we can. We want to push those top three teams and on a great day maybe jump up in there.”

His words proved to be prophetic, as the Utes did indeed have a great day and jumped up into the top three during the meet.

The Utes host the upcoming 2019 NCAA Mountain Regional Championships on Friday, November 15 at the Rose Park Golf Course. The women’s 6k race begins at 11 a.m. Fans are always encouraged to follow the Utes Cross-Country team on Twitter, Facebook and Instagram.