Christopherson: Utah High Schools Should Reevaluate The Risks Of Football 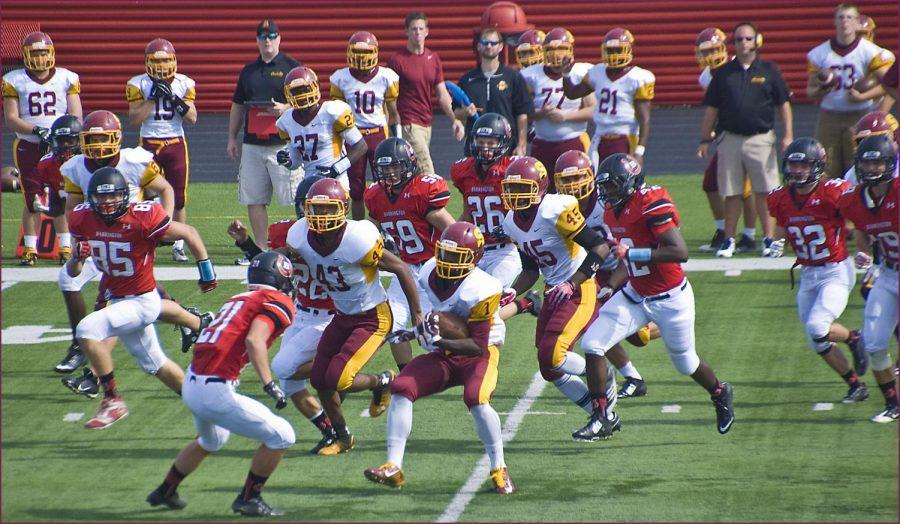 A former high school football player from Cache County recently sued his school district over injuries sustained after his coach put him back in play despite a traumatic brain injury. Konnor Finn alleges that his high school football coach told him to “man up” and “quit being a (expletive),” despite Finn’s concerns that he had developed a concussion. Finn continued to play in practices and games in the weeks following that game in October 2017, and was later diagnosed with post-concussive syndrome and a traumatic brain injury.

This story comes about halfway into football season, and calls Utahns’ attention back to the many risks associated with football. It also presents an important opportunity for leaders to reconsider the interplay between team sports and public high schools in our state. It’s time to think twice about whether young men should take the risk of traumatic brain injuries for the sake of school pride.

It is no secret that football is an extremely dangerous sport. According to the Brain Injury Research Institute, “10% of all college players and 20% of all high school players” experience brain injuries each football season. Concussions are so common — and so physically and psychologically devastating — the public has started to take notice, even to the extent that Will Smith starred in a movie named for the injury in 2015. Repeated concussions often lead to cases of chronic traumatic encephalopathy, or CTE, and other cognitive health problems, like Alzheimer’s and dementia. In fact, a 2017 study found that 99% of deceased NFL players had CTE, clearly linking the physical trauma of football to the degenerative brain disease. With statistics like that in mind, it’s baffling that we allow — and even encourage — young teenagers to participate in a sport that threatens their health and safety in such a significant way.

These problems aren’t exclusive to football. A close friend of my sister has sustained multiple concussions playing for her high school girls’ soccer team and has been struggling with pain, fatigue and difficulty reading for several months since. Still, football is an extremely popular, well-funded and uniquely dangerous sport that exemplifies the worst case scenarios for each of these concerns. Finn’s lawsuit is just the tip of the iceberg.

The physical risks are reason enough for schools to reevaluate their football programs, but it’s not the only problem the sports creates for students and schools. For some schools, a competitive football team seems to take priority over the real purpose of public education, which is for students to gain the knowledge and skills they need to be happy, successful and contribute meaningfully to their communities. Students on the football team may not be officially and explicitly prioritized over students in other programs, but the discrepancy in funding often indicates a preference.

Of course, this varies across schools, neighborhoods and individuals, but we all have high school acquaintances who took the success of the school football team more seriously than their own grades. At my school, athletes regularly got out of class well before the final bell to travel to away games or see a trainer. We should also keep in mind the unspoken fact that the physical dangers of football can also get in the way of student learning. It seems only logical to assume that students suffering cognitive difficulties from sports-related head injuries might struggle to retain the information necessary to do well in school.

Equally concerning is the amount of football coaches who also hold teaching positions at their schools. Nearly 34% of social studies teachers in the U.S. coach an athletic team or teach physical education, meaning there’s a significant risk — especially during a teacher shortage — that school administrators might hire mediocre or even unqualified teachers because of their coaching abilities.

As a teaching major and an education reform nerd, my ideal world is one where team sports are completely separate from public schools, where teachers are teachers, coaches are coaches, and safety and learning is more important to school pride than the scoreboard at a football game. I recognize that there are benefits to high school sports — at their best, sports encourage health and fitness, foster a sense of pride in neighborhoods, and teach athletes teamwork and persistence. For better or worse, they are integral to American culture, and such dramatic changes are likely implausible.

Still, somewhere in the vast scheme of our collective imagination, there must be a middle ground where school leaders prioritize student success and well-being while preserving the benefits of team sports. Now is as good a time as any for Utah’s education and state leaders to start thinking about what that might look like.