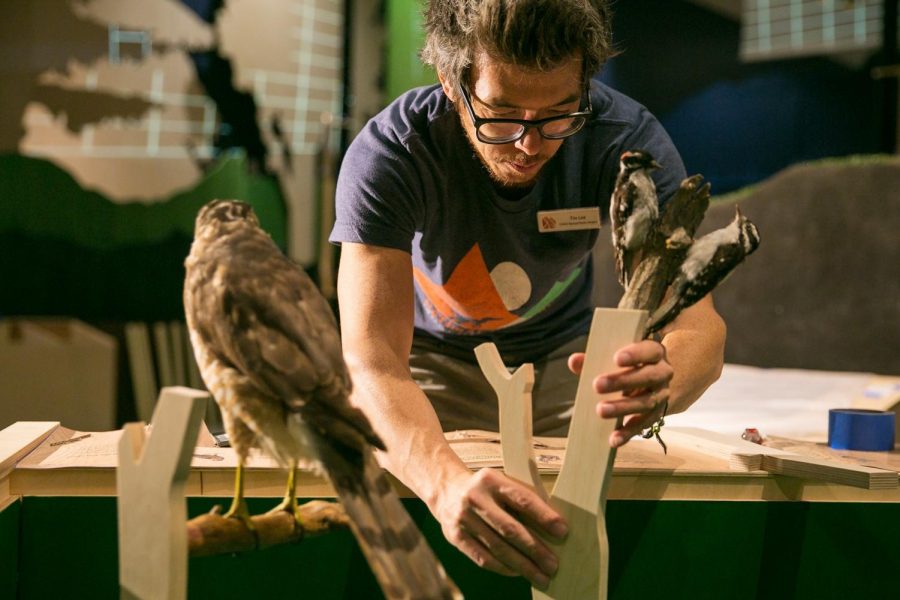 Foxes creep behind houses, birds of many species fill the space with their distinct songs, and plants flutter in the wind — everything inside the “Nature All Around Us” exhibit, celebrating 50 years of the Natural History Museum, feels vital and inviting. You almost forget that the fox is projected and the bird sounds are recorded. The exhibit draws you in with the nature of Utah. Everything seems familiar, but the hidden or rarely observed is brought to the surface. Traveling through six different connections between community and nature, the museum exhibit immerses the viewer with samples of animal life, interactive panels and what Tim Lee calls “the diorama 2.0.”

Lee, the Exhibits Manager and Senior Exhibits Designer, said the team looked at the project as “an opportunity to celebrate urban diversity.” It makes sense then that technology and the outdoors would merge in this exhibit, seeing nature through what characterizes our detachment in urban landscapes. Lee’s diorama 2.0, for example, adds technology to activate the typically frozen diorama. For this, they had to bring caged animals into the museum and film them in front of a green screen. Reaching out to people in the state, they brought in live foxes, skunks, hawks, snakes and even a particularly uncooperative cat. Convincing the animals to move in a straight line for the film took time, patience and carefully placed treats. The effect paid off. Visitors can even find insects crawling in the third zone of the exhibit, the Wildland-Urban Interface.

The first zone of the exhibit, Yards and Gardens, begins the entire tour in a simulated backyard. To pull you into this uncanny connection between the synthetic life and the organisms we live beside, the exhibit begins with a house. Projected animals animate the static outline of the house — a hawk lands, a skunk crawls into a bush. This zone also includes an “Alice in Wonderland” area of giant flowers and costumes for kids to wear and play dress up so that they can learn about pollinators interactively.

This section also highlights a human — Utahn Rebecca Ray. As it happens, the backyard seen here isn’t just anybody’s — it’s hers. As she overcame her fear of spiders, Ray began documenting for the natural observation app iNaturalist. “Nature All Around Us” encourages people to get involved in the app and become a citizen scientist. Because of the staggering amount of data that needs to be collected for studies — and because these studies take a lot of time — scientists like those at the museum encourage locals to make observations. There are several projects, like ones focused on foxes, squirrels and fireflies. Collecting observations on iNaturalist gives their scientists a greater, comprehensive picture.

Yards and Gardens transitions into Urban Forests, which features telescopes and tunnels, ways for all people to engage with the exhibit. They wanted “Nature All Around Us” to be a multigenerational experience, as well as one that would connect to different learning preferences. That was a guiding principle — according to Lee, they wanted visitors to be able to interact with the exhibit on kinesthetic, auditory and visual levels.

The Parks and Open Spaces zone also features an artistic corner created by the University of Utah professor Wendy Wischer, a spiral room wrapped like a seashell where three projectors create an all-around experience with scenes that change in the blink of an eye. She was partially inspired by fourth graders at Riley Elementary. Commissioning them to create art, she took what they created and envisioned this immersive, ambient space.

Winding out of Wischer’s creation, visitors can then explore spaces that capture the intersection of the wild and the urban. This section, capturing the natural environment around the history museum, then leads into Rivers and Streams, followed by a completely urban street. Finally, visitors finish the exhibit surrounded by pictures of nature that were taken by the community. The exhibit captures the need to be constantly aware of the two-sided coin we live on. Lee said many exhibitions end by hitting people over the head with a massive amount of info, a grand conclusion that most people are too tired to absorb. “Why not let them gracefully walk through surrounded by beauty?” Lee said. After three years in the making, Lee said  he was proud of the core team at the museum. “To highlight our personal stories was so beautiful,” he said. “To take pride in our home state.”

“Nature All Around Us” will be open until May at the Natural History Museum of Utah.