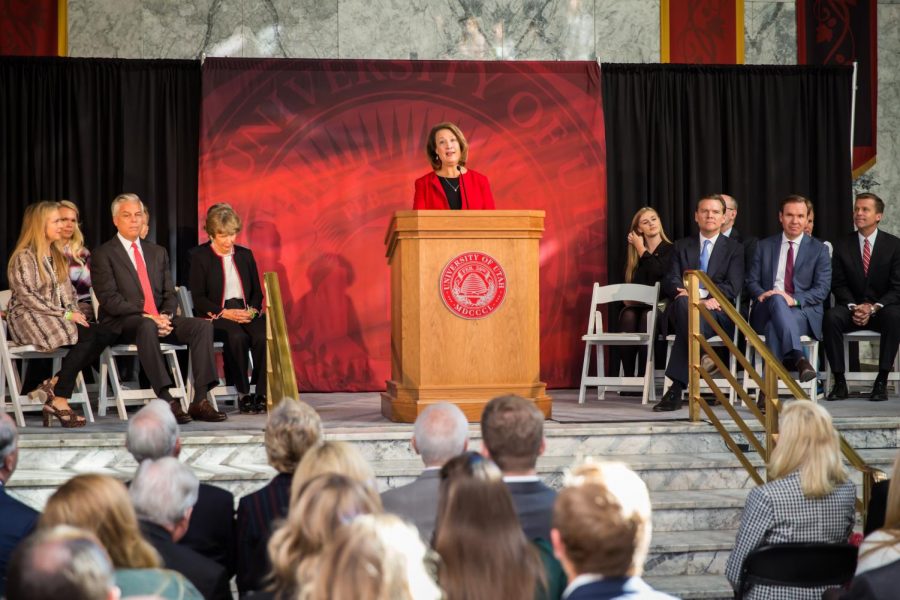 (Courtesy of the University of Utah)

Today, Nov. 4, 2019, president Ruth Watkins announced a $150 million commitment from the Jon M. and Karen Huntsman family to establish the Huntsman Mental Health Institute at the University of Utah. “This mental health institute will build on the work of the University Neuropsychiatric Institute and serve as a national center of excellence in research, treatment, education and community outreach,” Watkins said. “This gift will transform mental health and well being in the state of Utah.”

The Huntsman family’s donation has far reaching implications on campus. It will be used to support mental health services and screenings for the university’s 32,000 students.

“The Huntsman family understands what a pressing issue mental health is for the state of Utah,” Watkins said. “It is a critical issue in terms of the well being of our students, too, as well as many other young people throughout our state who are at the age when many mental health problems surface.”

“I’m grateful for what we have been blessed with, and what we’re able to do with the means that we are stewards over for such a short time on this earth,” Karen Huntsman said. To date, the Huntsman family has given or pledged over $650 million to the U.

“The Huntsman family’s commitment to building and creating excellence has now been extended to mental health, an urgent societal problem,” Watkins said. “They are raising the bar for compassionate care, quality of service, and access to treatment — just as they have done with cancer.”

“I have been in a handful of board votes over the past 20 years. I’ve never been in one that had this unanimity,” said Peter Huntsman, CEO of Huntsman Corporation since his father’s death last year. Karen Huntsman gathered her grown children around her and explained, “We are all members of the board. We all have an equal vote … We want to make a difference in mental health.”

Nearly one in five Utahns experience poor mental health at some point during their lives. An August 2019 report from the Kem C. Gardner Policy Institute indicated the demand for youth mental health services in Utah is growing. In 2017, suicide was the leading cause of death among Utahns ages 10 to 24. The Gardner Policy Institute found that almost 40% of Utah’s depressed youth between 12 and 17 received no treatment for depression in 2017, and neither did over half of Utah’s mentally ill adults.

“The state of Utah ranked number 51st — that’s the bottom, not the top — out of 50 states and the District of Columbia,” Peter Huntsman said. “This is a collective failure … We can do better. This is a call. This is a beginning.”

For Peter Huntsman, addressing this issue is a social obligation. A society “will be judged by how well it treats those who are most vulnerable,” he said.