No. 17 Utah Volleyball has Winning Weekend Against Arizona Teams 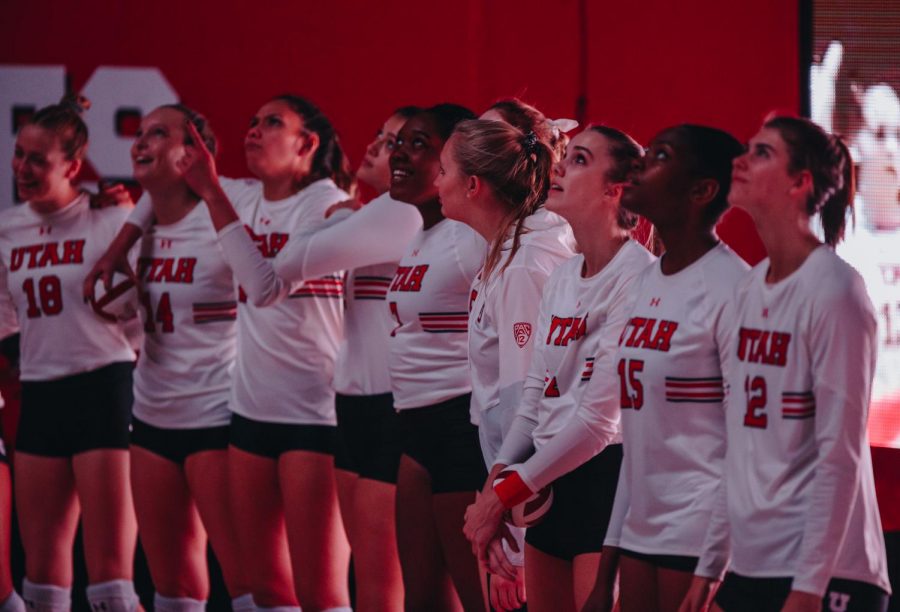 The No. 17 University of Utah volleyball team was back home this weekend in the Jon M Huntsman Center to take on Arizona State and Arizona. The team had a winning weekend, beating both schools and bringing their season record to 16-7, 8-4 Pac-12.

Last weekend, the Utes were home and faced No. 12 Washington, where they pulled off an upset, but went to five sets with Washington State where they fell by just two points in the fifth set.

Their first match on Friday night against the Sun Devils was a five set battle by both teams. The first set was tight the whole time, going point-for-point, but the Utes outlasted the Sun Devils, taking it 29-27. Set two was another close one, but this time the Sun Devils came out on top 23-25. Utah had a 7 point lead in the third, leading 21-14 and eventually closing out the third 25-21. Arizona State got hot in the fourth set and controlled most of the set, but Utah answered back going on a 4-0 run to tie it up at 23. The Sun Devils then took control and won the fourth 23-25. The fifth and final set was point-for-point until the teams were tied at 6, but the Utes took control and went on a 7-0 run to finish out the match winning 15-8.

A lot of Utes had great performances in Friday night’s matchup. Kenzie Koerber had 17 kills hitting .385 as well as 20 digs. Dani Drews also had a double-double night, with 15 kills and 15 digs. Freshman outside hitter Zoe Weatherington tabbed 15 kills, hitting .313. Berkeley Oblad had a career-defining night, finishing with 16 kills, hitting .394 with 6.0 blocks.

Friday night was a great night for Pac-12 volleyball as USC outlasted Washington in five sets, UCLA swept Washington State and Colorado got their first Pac-12 win against Arizona. Stanford still remains the team to beat, as they are 10-2 in Pac-12 play, but Utah isn’t far behind with an 8-4 record.

Sunday’s match against Arizona was another five-set battle for the Utes. In the first, it was a point-for-point set that the Wildcats ended up winning 22-25. For Set 2 the Utes went on a 7-0 run to take the lead 12-5, forcing Arizona to use both their timeouts early in the set, but the Wildcats answered back, tying it up at 14. In the end, the Utes came out on top 25-20. In the third set, the Wildcats came in hot, leading 11-7 at the first timeout, but the Utes answered back, tying it up at 14 again and taking the set 25-20. For the fourth set Arizona started off with a 9-3 lead by the first timeout and then took the set 25-19. In the fifth and final set, the Utes came out on top to win the match 15-8.

“We need our energy going into matches to come up so we can just overall perform better,” senior Brianna Doehrmann said.

Drews led the team with 25 kills and Weatherington wasn’t far behind with 13. This is the fourth consecutive game where the Utes went 5 sets with opponents, and the team has gone 5 sets with seven opponents in Pac-12 play.

“Arizona came out and stuck with a great game plan, so I’m really proud of our team for handling that situation and to come out with a win is even better,” said coach Beth Launiere.

Next weekend the Utes will head to southern California to face USC on Thursday at 8 p.m. and UCLA on Saturday at 6 p.m. Both games will be live streamed on their individual school’s website.