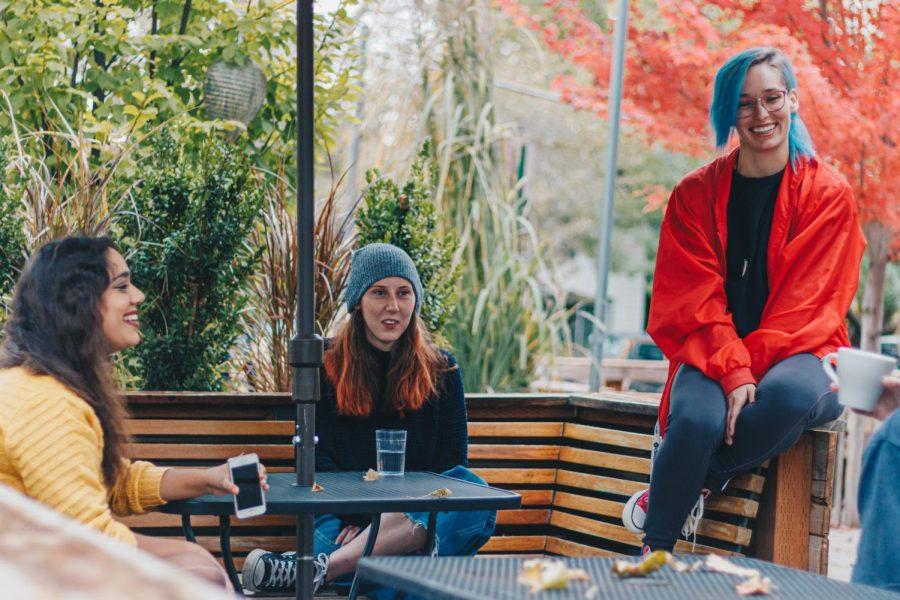 Tucked away inside the cozy, rain-streaked Coffee Noir grows a bud that doesn’t wait for spring to blossom. Salt Lily Magazine, a pastel pop of floral pictures and prose, just went live online in the dead of fall. The new magazine began gaining momentum in August as a platform that could generate inclusion for artists all over Salt Lake, regardless of how well recognized they are.

“We were thinking Humans of New York, but instead, creatives of Salt Lake,” said Elly Campbell, writer and editor-in-chief. Here’s the best part: these creatives running the magazine don’t just work as young people in the industry — they work as students.

All three of them are either current or former University of Utah students, and Campbell is looking at trade schools for electrical work right now. Meira Bashir, Salt Lily’s creative director, met Campbell through their high school newspaper where she worked as the editor and Campbell as a “brilliant writer.” Of course, Campbell modestly shook her head. “I share a birthday with Mark Twain, so [writing is] my destiny,” she said. They met Sabrina Baranowski, “their print editor and resident angel,” in the words of Bashir, through Instagram.

All of their photographs online, shot by Bashir, are Polaroids, which lends to their surreal aesthetic. “Myra just wants to make everybody pretty,” Campbell said. The photos of the artists they write about capture an otherworldly, dream-pop vibe. “That’s why I actually joined the team,” Baranowski said. “I saw all the beautiful photos and I was like ‘oh, I would love to design for this.’” Since they’ve been meeting at Coffee Noir as a makeshift office, it’s also where they find many of their artists.

“This is my baby,” Bashir said. “I’ve always wanted to do something like this and the ball is actually rolling. For a long time, I hated Salt Lake City because I’m not LDS, I’m not white, I don’t ski. For a very long time, I was like, okay, where’s my community?” As she went into art, she realized that there were a plethora of artists, but there was not a community. Inspired by the zine culture that came out of the Riot Grrrl Movement and intersectional feminism, Bashir embraces punk sentiments in lieu of mass media. “Karl Marx said that the people who have power are the people that control knowledge. Right now we’re in this really scary time period where we have six media conglomerates that are controlling everything. I think there needs to be more independent media.”

It’s still a process, though. Personally, they’ve run into trouble through assumptions made about them on social media. “Does it even say on the website that this is a group of women?” Baranowski asked. “No, it’s just the flowers and the aesthetic and then they sexualize us as women. Us as women and the brand that we have — guys are still not seeing us for our writing or our articles or our venture.”

The majority of the artists that they’ve covered happen to be women and genderqueer people. Only one article so far features a white, cisgender male. “And that was not on purpose,” Bashir said. “It’s interesting because I feel like women have been ostracized and marginalized in the art community so long.” She’s grateful to create a space that can act as an inclusive space for women. Many of the female artists that they feature feel more comfortable having her photograph them, too. Instead of sexualizing or objectifying them, it’s a matter of them recognizing their art and inviting them into their creative effort. The gesture is sincere. “We care about your art, not your body,” she said.

According to Campbell, she has many friends that are people of color who are tired of not having representation, be it in magazines or any other artistic setting. They want to be conscious of that, and want others to look at their magazine and feel included without feeling tokenized. They’re not a corporation that needs to meet a diversity quota. Plus, they’re surrounded by a wealth of artists from every background, so there’s no need to find a face to fill a requirement. Myra, who’s also a person of color, comes from a family of artists. Both her parents are in artistic fields and her sister is an artist. Still, she’s had many people approach her and assume that she’s pre-med or going into a STEM field. “No, I’m a communications major. I want to be a writer and a photographer.”

Their gestures, coming from a place of genuine interest, encourage authentic stories. “We really want the artists to speak for themselves and not just be journalists spinning a story in order to sell it,” Bashir said. In a recent story where an artist talked about mental health, Bashir took a step back and kept it as an interview, deciding she didn’t feel comfortable writing about it. Sabrina added, “Give it an actual voice not the illusion of a voice.”

They’re hoping their first print edition will be released in the next couple of months. Baranowski is currently processing how to design the magazine, which she’ll piece together in the book arts studio on campus. “We want you to want to buy it, to feel it, to touch it, to interact with it. We want that individual feeling,” she said. Whether that be using textural papers or something else, it physically encourages interaction. “Because that’s what our stories do. They encourage a dialogue.”

“I feel like this is a love letter to people who feel like they’re not part of Salt Lake,” Bashir said. “It’s something that they can join and be a part of.”

Curious artists, writers and readers can find Salt Lily on Instagram and at their website at www.saltlilymag.com.