Rediscovering Campus Traditions, One Rock at a Time 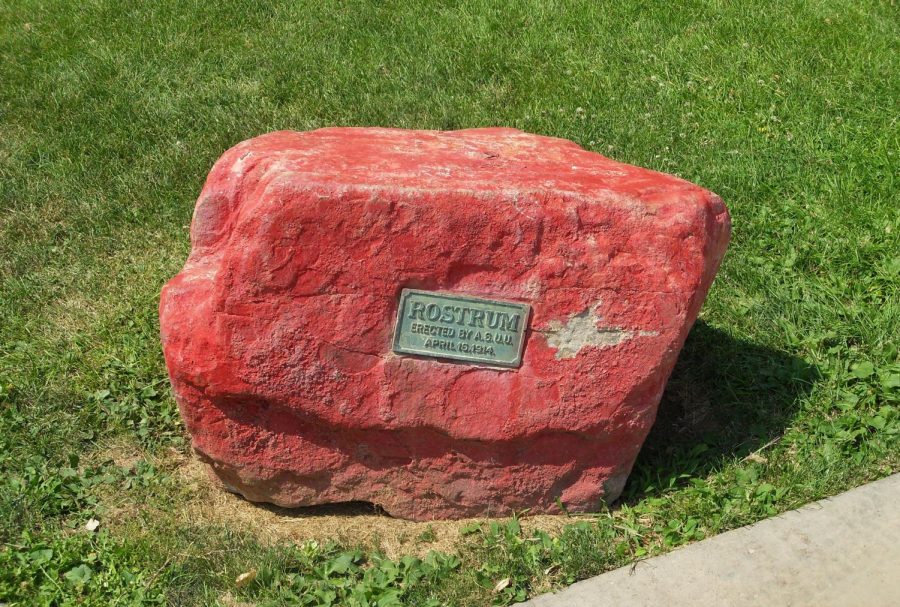 What traditions does the University of Utah have?

This is the question that ASUU campus events director Matthew Irwin has been struggling with during his tenure. Many colleges across the nation are famous for their traditions — Texas A&M has their midnight yell, while Ohio State and its students plunge into the freezing waters of Mirror Lake right before “The Game.” What makes their traditions different from the ones at the U?

For Irwin, one of the biggest traditions is the Rostrum.

“The Rostrum is a rock placed in the middle of President Circle. If you follow the pavement down the top steps of the Park Building, across the street, across that pavement, once the pavement ends, you are at the Rostrum,” Irwin said.

Irwin says the placement of the rostrum is intentional. “The definition of a rostrum is an elevated platform for someone to deliver some sort of speech on,” he said. The Rostrum, which was placed by ASUU on April 16, 1914, is right in front of the John R. Park Building, which houses the President’s office. “It’s a place for people to share their voice,” Irwin said.

Historically, painting the rostrum was a tradition for U students. Freshmen would paint the rock green and other students would paint it red. According to urban legend, some BYU students snuck in and painted the rock blue, which eventually faded into grey. “It had been gray since I started here as a freshman two or three years ago,” Irwin said. “And then it was finally [painted] red again homecoming week [of this year].” According to Irwin, the most important part of this tradition is that no one has ever been caught painting the Rostrum.

Currently, the Rostrum is still painted red, but there’s one key difference — the phrase “You Are Loved” is painted on the rock that many U students pass by on a daily basis.

“I really like that it says ‘You Are Loved’ right now,” Irwin said, “because the entire purpose of the rostrum is to share your voice and I think that the student is sharing their voice by painting ‘You Are Loved’ on top of it.”

Martinez and Irwin agree that the U’s reputation as a commuter campus can make it difficult to sustain notable traditions. Establishing and maintaining traditions could be important as the U becomes an increasingly residential campus.

“If we don’t have traditions in the next few years, it will be difficult to create a community vibe,” Irwin said.

In the meantime, ASUU is working to combat what they see as the drawbacks of commuter campus culture. They are currently planning an event that will take place at the Rostrum and scheduling late-night programming to draw commuter students to the U when they are not in class.