Talbot Shines in Her First Year of Utah Soccer 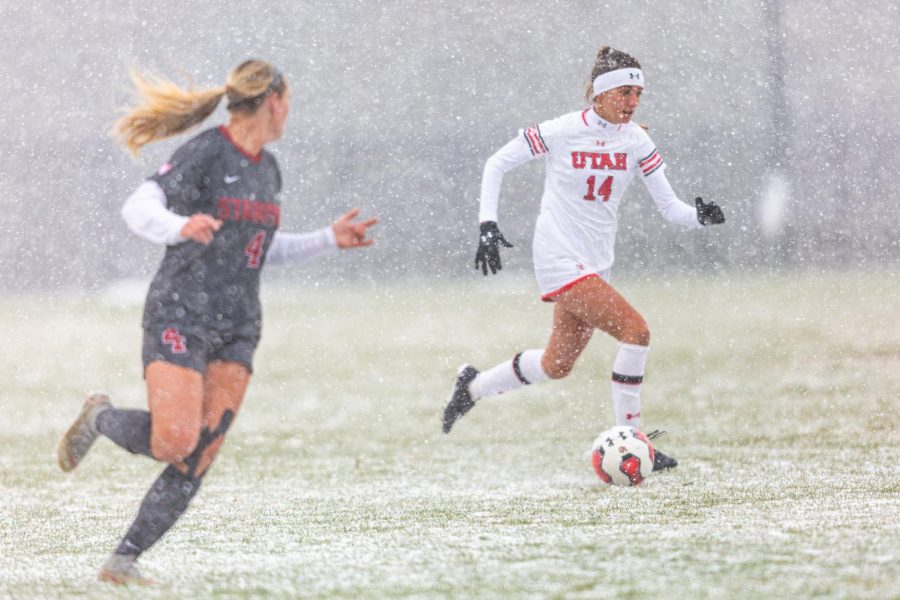 University of Utah soccer midfielder Courtney Talbot may only be a freshman on the team, but that didnt’t stop her from getting off to a great start in her first season with the Utes. Head coach Rich Manning sees not only her soccer smarts but also the way she can make herself better as a player.

“She’s very thoughtful about the game. She’s very coachable, very analytic. She really thinks about ways that she can play better, improve her game and help the team,” Manning said. “It’s hard to tell when you recruit somebody, you see all their talent and their skills and everything. But to see someone who takes a lot of care and pride in her game, I think is really special.”

Talbot played many sports growing up, but settled on soccer as her sport of choice. “I ran track in junior high and my sophomore year of high school, and then soccer kind of got in the way of track, so I had to stop running. I also played basketball most of my growing up until freshman year,” Talbot said.

When she suits up for the Utes, she takes her place in the midfield and makes the plays the Utes need. Manning said, “She’s a good two-way midfielder, so she can play offense and defense well. She’s shown us a couple of ways that she can create goals for the team, which is special. Then she gets up and down the field as well, so her versatility and her all-around game are really good.”

Talbot was committed to making it to the collegiate level after she chose to pursue soccer full time, giving up the other sports she played growing up. “My junior and senior year of high school, I quit high school ball, and I played with my club team in the academy and we practiced every day for a few hours and it was a big commitment,” she said.

Gone was her social life. Her new focus was prepping for playing at the next level.

“Lots of social life being cut out, but it was still fun. Soccer was my social life,” Talbot said. “Playing in the academy really helped me get ready for the college level.”

During her rookie time here at Utah, she has already found the back of the net twice while assisting on one more goal. She has taken over 20 shots total, nine of which were on goal this season.

Talbot hasn’t quite figured out what her plans are for life after college. She’s currently majoring in accounting at the U, but hasn’t ruled out taking her soccer career to the next level. “After I graduate, I’m thinking about maybe playing professionally,” Talbot said.

She has always had her eye on Utah as a place she would like to play and it’s been memorable so far. “It’s been super fun, and I really like the team. I like the coaches and the Pac-12 is awesome,” Talbot said. “I want to make a good run through the tournament by the time I’m done here.”

Manning has nothing but high hopes for Talbot and what he is hoping to be a strong career for her at the U.

“Her soccer talent and ability is great,” said Manning. “Also the character piece — that leadership and character, I think that’s going to have an impact on the team as well.”