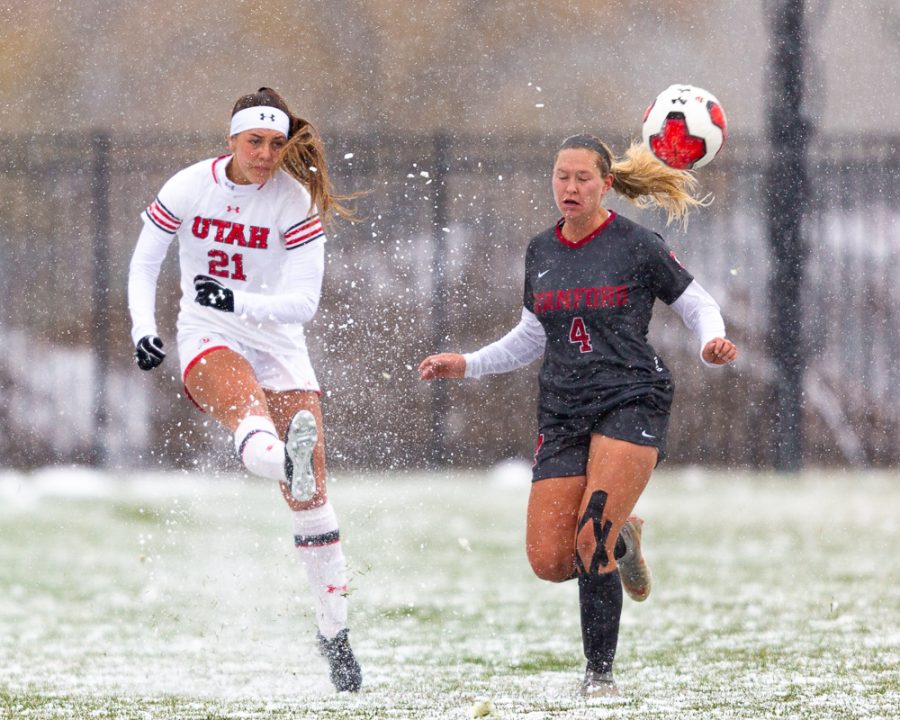 The University of Utah women’s soccer team was back home on Thursday, Nov. 7 to honor their seniors and take on the Colorado Buffaloes for their regular season finale with 1,375 fans in attendance. The team came out with a victory, ending their season 8-8-4, 3-5-3 Pac-12. The team is 8th in Pac-12 play and ended the season with 12 points total.

Last week, the Utes were in Washington where they faced the No. 21 Huskies and won. Dunn scored the only goal of the night and Nelson had 8 saves. For tonight’s match, Dunn was once again the only person to score, securing the Utes’ 1-0 win for her senior night.

“We went into tonight with the mindset to just go out there and have fun, this could be our last game for the whole season especially for the seniors, which is me,” Dunn said.  “Our mindset was to go in and give it 100%, give it everything you have.”

The first shot came at the 1:42 mark by Kayleigh Webb of Colorado but it was over the top of the net. Colorado shot two more shots in the first six minutes of the match, but Nelson didn’t even touch the ball because the shots were barely over the net.

In the ninth minute, Daugirda took her shot but missed over the top right corner of the net. Dunn wanted to get her chance at the 13:44 mark, just hitting the bottom center, but Jalen Tompkins was able to get the save.

At the 17:46 mark, Dunn scored the first and only goal of the match. It was her third goal in her third match in a row. The Utes weren’t letting up, as Kylee Geis, Dunn, and Daugrida forced three saves by Tompkins right after the 26:00 mark.

In the first half, Colorado took 4 shots while the Utes took 7. Tompkins had 5 saves while Nelson didn’t get a chance for a save with the strong Utah defense. Colorado had 1 corner kick and both teams got 3 fouls for the first half.

“It was an important game, and we were nervous about the emotions of the night … but we played really well,” Head Coach Rich Manning said. “Putting the occasion together with a really good performance just makes it special and something that we’ll all remember for everybody on the team.”

The team will learn if they will participate in postseason play soon. The NCAA Selection Show is on Monday afternoon at 2:30 p.m. MT. It will be streamed live via NCAA.com, where the Utes will find out their fate for the upcoming playoffs.