The General Election Happened on Nov. 5. Here’s What Happened in 72 Hours. 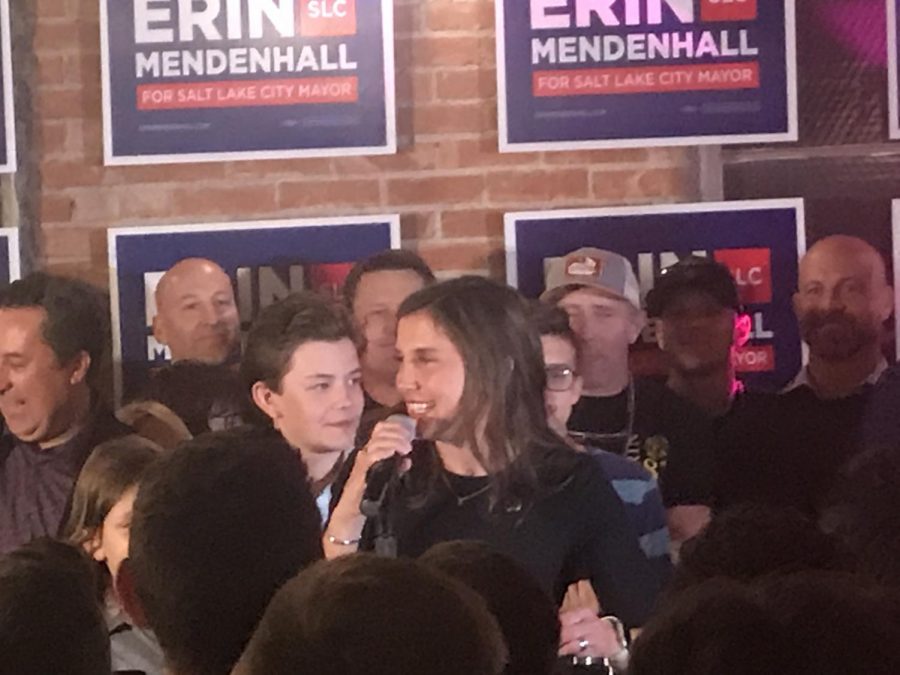 Erin Mendenhall gives a speech to a crowd on Nov. 5 at Publik Coffee

On Tuesday, Nov. 5, after months of campaigning, Erin Mendenhall was declared Salt Lake’s next mayor. This was the first time in Salt Lake’s history both mayoral candidates in a general election were women. Both Democratic state senator Luz Escamilla and city councilwoman Mendenhall are University of Utah alumni as well.

Election Night
Nearby State Street on Harvey Milk Boulevard at Escamilla’s headquarters around 8 p.m., the polls closed. There’s a large gathering of supporters, organizers and voters eager to dive into pizza and the results. According to preliminary counts, Mendenhall was ahead.

Among the crowd are two young field organizers Jazmin May, a Westminster alum, and Aaron Carrell, a senior studying political science and campaign management at the U.

When asked why young voters are vital to municipal elections — a dimension of the democratic process — Carrell recognizes the political foundation of Salt Lake during his second time aiding a campaign. “We are easily affected by who we elect in ten years,” Carrell said, specifically cites the city’s initiative to go carbon-free by 2023.

“I want to thank you for giving your time, your energy, your talents, and your financial support to this campaign,” Wharton said. “There’s an amazing energy in the room tonight.”

Citing grassroots organizing, including knocking on doors, talking to residents and garnering support from voters, Mendenhall talked about her personal and political journey during this year’s race.

“For me, this campaign has truly been like falling in love with my city all over again,” she said. “Listening to voters in every neighborhood hearing their passion, their frustration, their vision for the future of Salt Lake City.”

“My heart is all the girls who watched two women in Salt Lake City, our capital city, battle out for the highest elected office in this city and thought nothing of it,” she said.

Escamilla, however, declined to concede until further notice in hopes of receiving a similar fate for the primary election when remaining votes pushed her past former candidate and state senator Jim Dabakis.

Concession
On Wednesday, Nov. 6, Escamilla conceded to Mendenhall and said she would continue serving as state senator for Utah’s legislature.

While Escamilla aligned with Mendenhall on many issues, Escamilla particularly illuminated the issues and voices of Salt Lake’s west side.

“We had a good conversation and I wished her the best of luck as our city’s next mayor,” she said in a press release. “In these times when we see so many divisions, it’s a reaffirmation of our great city to see that we all care about each other.”

The final results of the city’s mayoral race gave Mendenhall a healthy lead at 58% and Escamilla around 42%. The total voter turnout was at 30%.

For the upcoming months, Mendenhall will have to tackle the Inland Port, homelessness and air quality — Salt Lake’s most pressing issues.

She has asked Natalie Gochnour, associate dean of the U’s David Eccles School of Business, to join her transition committee.

“I really can’t wait to get started,” she said.