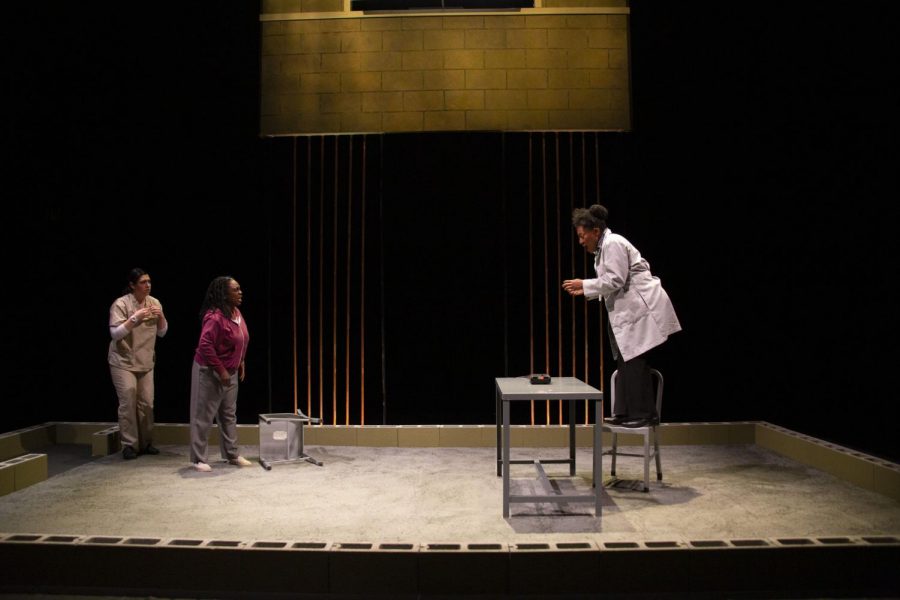 The cast of "Oda Might" (Photo by Rick Pollock, Courtesy Plan-B Theatre Company)

In their latest production, “Oda Might,” Plan-B Theatre Company is able to do what most would deem impossible these days — balance the good with the bad. The production deals with heavy subject material such as mental instability, murder, race, injustice and death. While discussing such complex issues, the writing maintains a feeling of lightheartedness and ultimately relays a message of hope to viewers. The play is set in a mental institution, recounting a visit between a doctor and the patient she is seeing. I went into the production with no assumptions of what to expect, and I left in the same state of mind.

In her first work with Plan-B Theatre Company, playwright Camille Washington has managed to write something as thought-provoking as it is funny. The material speaks for itself, yet the cast truly brought it to life and made it feel as if the audience was peeking through a window, watching real-life acts unfold. Dee-Dee Darby-Duffin plays a smart-mouthed patient who commanded attention as soon as she spoke her first line. It is hard to imagine anyone in this role other than Darby-Duffin because it is as if it were written only for her. Yolanda Stange plays the Doctor opposite Darby-Duffin, and the chemistry between the actors is immediately evident to the audience. Finally, Flo Bravo is able to provide some comedic relief as an anxious orderly simply trying to do her job. The character dynamic was engaging and intense throughout the show. The actors were feeding off of one another, and their actions and reactions felt genuine. I believed every second. This was a visual experience that had me leaning forward in my seat as if being physically closer to the stage could give me the ability to guess what would happen next.

The play makes the audience feels so much at once, and yet it seems like a breath of fresh air at the same time.  It would jump from humorous moments to inquisitive scenes — then it would focus on something dark or questionable. A not-so-popular saying claims that you have to be great at something in order to make it look so easy. The people behind “ODA Might” are just that great. The play seemed simple, and it all looked so easy, yet it’s not possible that it was. To grapple such heavy material and fully entrance an audience for 80 minutes proves that nothing could be harder.

With an impressive cast that perfectly embodied and brought to life such a resonating script, it’s a no brainer that this is a must-watch, especially given that the script for “ODA Might“ was chosen by a panel whos received nearly a dozen submissions from local playwrights age 35 or younger. The play is also the concluding production in Plan-B Theatre Company’s partnership with The David Ross Fetzer Foundation for Emerging Artists. The opportunity to see a great show while simultaneously supporting local playwrights makes the production extra sweet.

The play is being performed in the Studio Theatre within the Rose Wagner Center and runs through Nov. 17. I would recommend making the time for this one — it’s in a category all its own. Tickets are $22 and can be purchased online at Plan B Theatre Company’s website or at the door.