Brian Regan Charmed Audience at the U 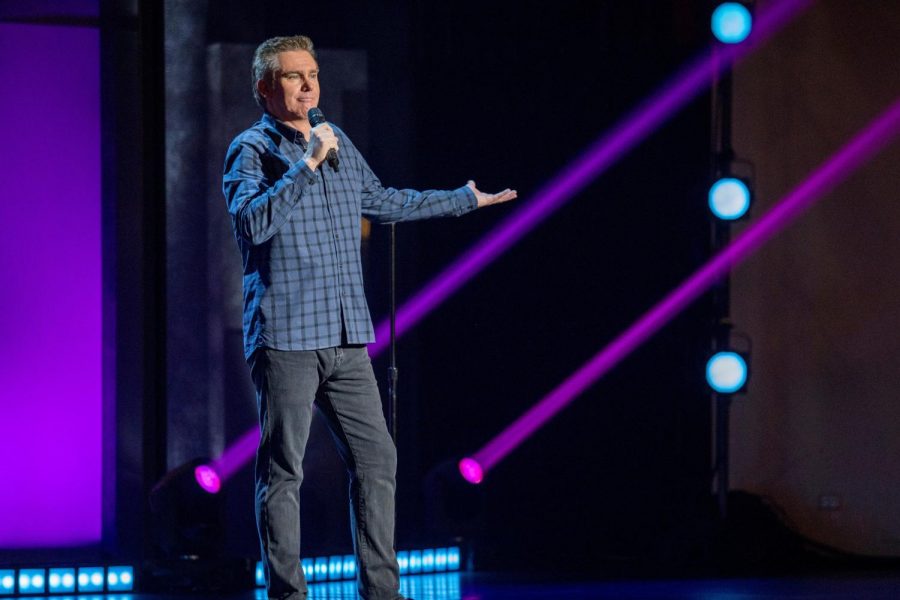 On Nov. 9, comedy fans gathered in the Jon. M Huntsman Center at the University of Utah for a night of laughs hosted by comedians Brian Regan and Jackie Kashian.

Kashian opened for Regan and successfully warmed up the audience with a few self-deprecating jokes and some about middle-aged, white women. “Middle-aged, white women don’t die, we just re-spawn again and again,” said Kashian. She was vibrant and full of infectious energy on stage as she kept the audience on their toes, mixing in other jokes about the pros of online dating and the “weird flirting” that borders on harassment. Kashian’s act was stellar. She had the audience roaring with laughter for the duration of her set.

Following Kashian, the MC announced Regan. He ran to the stage shaking hands with fans, who greeted him with cheering and thunderous applause. He opened his set with a monologue about his self-diagnosed obsessive compulsive disorder and the odd organization of his bookshelf as a result. “The top shelf is for my new books, the bottom for books I’ve already read and the middle is for books I’m currently reading,” Regan said. “I don’t alphabetize my books, I order them in chronological from when I got them. I’m not a loon.”

Regan followed with jokes on his social anxiety at parties, failed lottery tickets, a “thank you” character flaw and sibling torment. He told the story of how he and his siblings teased their youngest brother Terry. “He’s a redhead and as a kid we told him that we picked him up out of the garbage and brought him home,” Regan said. He continued, telling the audience that he and his siblings also made up a fake older brother named Joe. The siblings would tell Terry that Joe moved to Australia after he was born because he didn’t like him. “We would fake phone calls from Joe by having one of us run across the street and call home,” Regan said. “We’d gather around, yelling ‘Joe is calling from Australia,’ and pass the phone around to everyone but Terry.” Regan’s depictions of sibling relationships were amusing and struck a chord for many as he made fun of those most mean-spirited moments.

Regan was extremely lively and brought a youthful presence to the stage. He moved around with ease — goofily acting out his jokes on marching bands, otters building dams and holding doors open for others. Regan’s entire act was hilariously relatable and family friendly. He’s proof that comedians can be funny and entertain an audience without foul jokes or language.

At the show, it was announced that Regan is going to be a guest on “The Tonight Show Starring Jimmy Fallon” on Nov. 28. He will also continue to tour around the country for the remainder of 2019 through June 2020. Additional information about his tour can be found here.