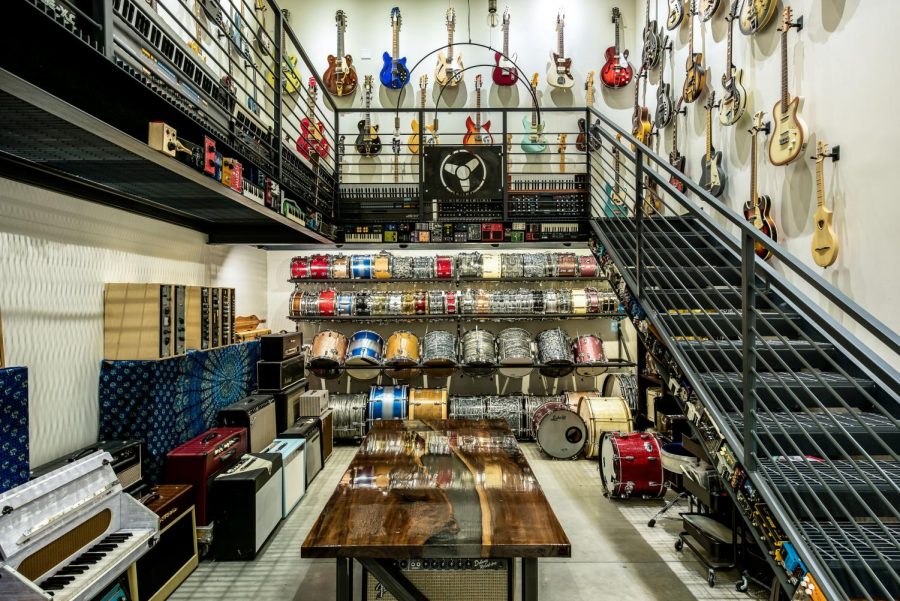 In the heart of downtown Provo, there’s a curious yet modern-looking house. The outside is colored in various shades of blue, enclosed by a comforting yard and quaint, though if you look closely enough you can spot a few modern design elements. Don’t let the humble exterior fool you — the interior houses part of June Audio Recording Studio, a state-of-the-art recording studio, right here in Utah.

The house for June Audio has been around since 1924, but it’s recently gone through a renovation of sorts. The building still retains its old architectural glory, from vintage woodwork to wonderful acoustics, but behind it, a designer addition is ready to be unveiled. Studio owner, producer and engineer Scott Wiley is more than proud of the integration of the old and new. “We bought an old house in Provo, where we’ve been working. We had the studio housed inside the old house while we built the new spaces out behind the old house. They’re now connected as one building, but they’re both quite different feeling,” Wiley said.

The combination of the old and new is at the heart of June Audio’s mission. As with any other industry, music is constantly evolving with new technology and equipment. The recording studio houses the best of the best the industry has to offer, courtesy of design guru Wes Lachot — a musician and renowned studio designer. The year-long renovation started with Wiley taking a tour of other studios that Lachot had designed. “He’s responsible for the look and sound and functionality of the studio spaces,” Wiley said. With two control rooms, two tracking rooms and a musical army of instruments, equipment and hardware, June Audio is pristine, and a musician’s dream. Wiley, who studied music recording at the University of Southern California, more than appreciates the careful work Lachot put into the construction of the studio. With two studios contained in one building, it takes careful consideration to set the space apart from the city that surrounds it. “There’s a lot that goes into the construction that’s very unusual as far as the way things are built to get that kind of isolation,” Wiley said.

While the renovations have brought many impressive features to the studio, the most mesmerizing of all is The Instrument Gallery, or as their website puts it, “a candy shop for musicians.” The colorful collection of guitars, drums, amps and more will leave even the most musically challenged viewers in awe. The best part? Any musician or group that records at June Audio has full access to all of the instruments to get exactly the sound they’re looking for. In fact, June Audio’s client list is already impressive and continuing to grow. National artists like John Legend and the Killers have been at the studio, and local artists such as Neon Trees, David Archuleta and The National Parks have recorded with June Audio as well. Wiley previously worked and lived in Los Angeles, the leading city for music and music recording aside from New York and Nashville. “I would say that this studio is on par with studios in those major markets,” Wiley said.

However, Wiley has a soft spot for local artists and local music. “Owning the studio is not a big money-making venture, but we love the local music scene and we want to do our best to make something really special that people can use and will hopefully help them make their best art,” he said. It all comes back to community for Wiley and June Audio. While it’s easy for artists to go to bigger cities like Los Angeles to record, even the big cities started off with smaller communities. During this short amount of time that the studio has been open, Wiley said, “My favorite thing is the community that forms between musicians.”

June Audio Recording Studio has it all: community, experienced mentors, the best equipment and — perhaps most remarkable of all — a welcoming, homey environment.

The recording studio will have an open house on Nov. 15 and Nov. 16 from 10 a.m. to 4 p.m. to celebrate their grand opening. The public — music lovers, performers and everyone in between — are invited to visit and see the space.