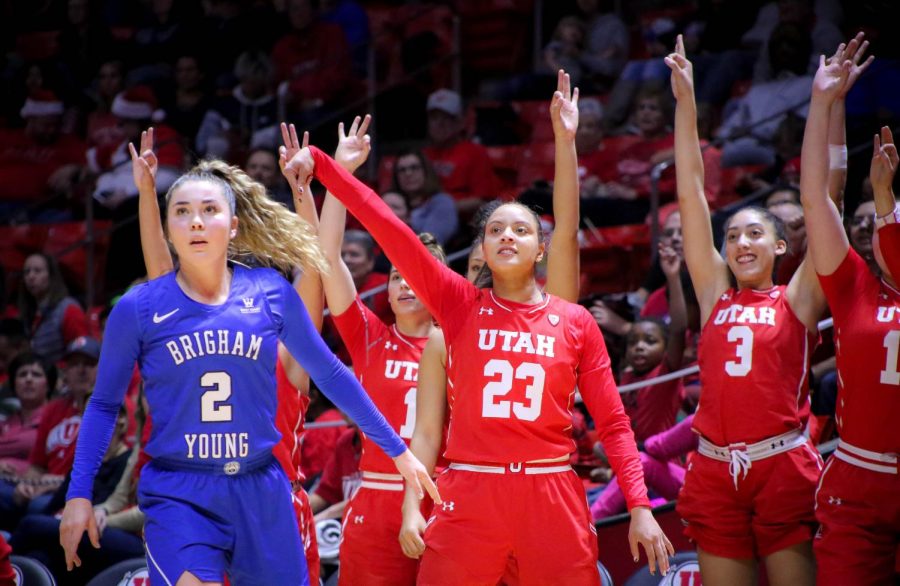 The University of Utah women’s basketball team (0-2, 0-0 Pac-12) will host their home opener this weekend, Saturday, November 16, 2019, at the Jon M. Huntsman Center. They welcome the South Dakota Coyotes (3-0, 0-0 Summit League). The Utes won the only previous matchup against the Coyotes 66-59 in 2015 at the Huntsman Center.

Former Teammates, Now Foes
Utah sophomore Dru Gylten will be reunited with her high school teammate, South Dakota senior guard Ciara Duffy. The last time the two were on the court together they won the 2016 South Dakota Class A State Championship, the third time they won as teammates at St. Thomas More High School in Rapid City, South Dakota.

A Ute Recap
The Utes are coming off a road trip to Cincinnati where they dropped two tightly contested games — one to Cincinnati and one to Xavier. The Utes are hoping to bounce back and get in the win column against the Coyotes.

Brynna Maxwell is the only Ute averaging double figures in points, scoring 13 per contest through the first two games. Gylten leads the Utes in two statistical categories, averaging 5 rebounds and 5 assists per game. The Utes have proven that they are a great passing team, averaging 15.5 assists per game.

Getting to Know the Coyotes
South Dakota began their season with two wins, first against Northeastern 80-76. Their second win came against Green Bay 66-60. The Coyotes hosted Drake on Wednesday, Nov. 13, before making the trip to Salt Lake City.

The Utes will have their hands full with Duffy, who leads the Coyotes offensive attack. Duffy averages 21.7 points per game, while dealing out 5.66 assists per game. A huge portion of the offense will go through her.

Keys to the Game
South Dakota, like the Utes, have struggled with turnovers this season, giving the ball away 17 times per game this season. Utah must capitalize on these mistakes and make the Coyotes pay for not taking care of the ball.

Fouls have been a problem for the Utes this season. Lola Pendande was forced to sit out portions of both games due to foul trouble in the first half. Pendande fouled out of the game against Xavier. While on the floor, Pendande has been the Utes’ most efficient scorer, shooting 64% from the floor, averaging 9.5 points per game. Gylten has also been in foul trouble at points this season, fouling out against Cincinnati.

On the other side of the floor, South Dakota has not proven to have the depth that Utah has. The Coyotes largely utilize a seven player rotation. If the Utes can attack and get South Dakota into foul trouble, it will prove advantageous for the Utes. Niyah Becker could prove invaluable, as the sophomore is leading the Utes in free throw attempts with her aggressive offensive play.