No. 7 Utah Football Dominates Bruins, Move to 9-1 on Season 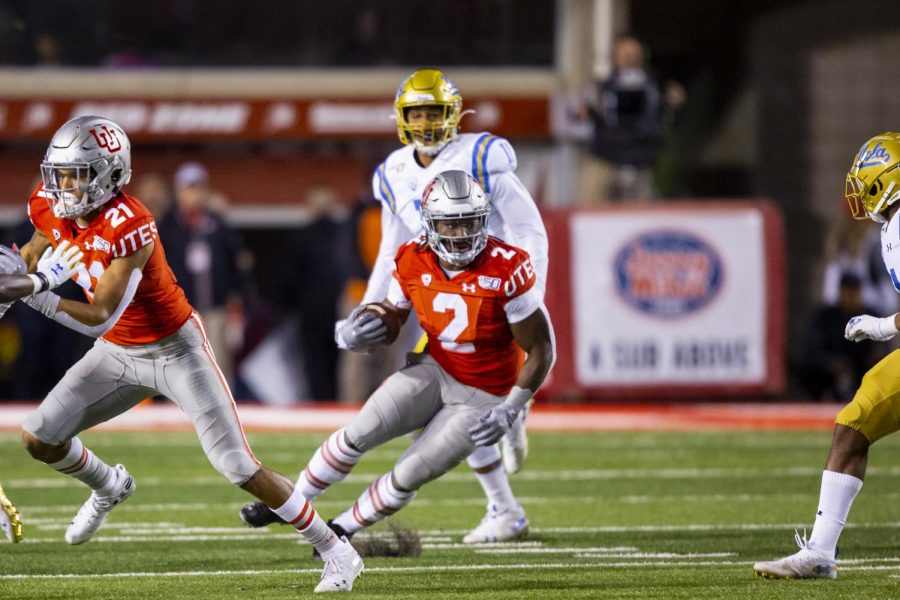 The Utah defense made sure to make UCLA’s Dorian Thompson-Robinson uncomfortable during the game. Thompson-Robinson was 20-36 for 216 yards and 2 interceptions. He was also sacked 5 times on the night. Senior safety Julian Blackmon led the team in tackles with 12 total on the night. Blackmon also had 1.5 sacks, one INT and one forced fumble. Pita Tonga had the other interception for the Utes while Penisini forced another fumble.

Tonight’s game marks the 14th quarter in a row at Rice-Eccles Stadium that the Utah defense hasn’t allowed a touchdown.

“The front four — I’m biased — is the best in the country. The linebackers are active and tough and making plays, the secondary is covering,” said Head Coach Kyle Whittingham. “Coach Scalley is getting them in the right spots and right locations and this staff is doing a great job at fundamentals and techniques and you just add that all up together and it’s a pretty good defense.” 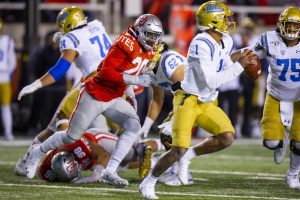 On the offensive side of the ball, it was the Brant Kuithe show tonight. Kuithe was Tyler Huntley’s favorite target, being targeted 6 times for 132 yards and a 69-yard touchdown reception.

“I go into every game trying to think I’m going to get a lot more targets, but Snoop got me the ball and I was open in space and I just made a move,” Kuithe said. “Credit that to the O-line and credit that to Tyler also.”

Senior running back Zack Moss had another dominant game, rushing for 127 yards and 2 touchdowns. Devin Brumfield and Devonta’e Henry-Cole also saw action from the backfield. Henry-Cole scored the final touchdown of the game for the Utes.

“Coach Ludwig just put me in great positions to make plays,” Moss said. “Without the guys in front of me, the O-line and Snoop right here doing the things to make it a lot easier for me, I wouldn’t be able to do it without those guys.”

Also scoring for the Utes was Samson Nacua who caught an 83-yard pass from Huntley. When all was said and done, Huntley was 14-18 for 335 yards and 2 touchdowns. He also rushed for 1 touchdown in the victory.

When asked if he is ever worried that his receivers wouldn’t be able to make a play, Huntley put it simply — “I have more confidence in them than I have in myself, and I’ve got a lot of confidence in myself.” 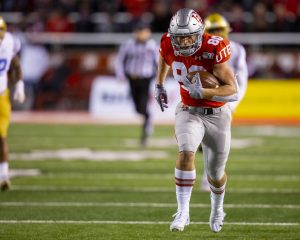 Mika Tafua scored for the defense on a 68 yard scoop and score after a fumble by Thompson-Robinson.

Tafua’s touchdown was huge, not only for the team but for him as a player.

“It was awesome, you saw I was tired after that play because I sprinted 100-yards to go and celebrate with him,” said Bradlee Anae. “You could tell we were very excited for Mika and it was just a fun game overall for the defense.”

While the regular season is winding down, the focus is still to go 1-0 every single week.

“We still go two games left,” Whittingham said. “We’re not done yet. It’s the same MO this week as it’s been the last several weeks, just focus on what’s right in front of you, don’t worry about any of the outside stuff and just pour all your attention and your focus and your efforts into whoever is next.”

The Utes will hit the road for the last time in the regular season next week as they head down to the desert to take on Arizona. Kickoff time is still to be announced.