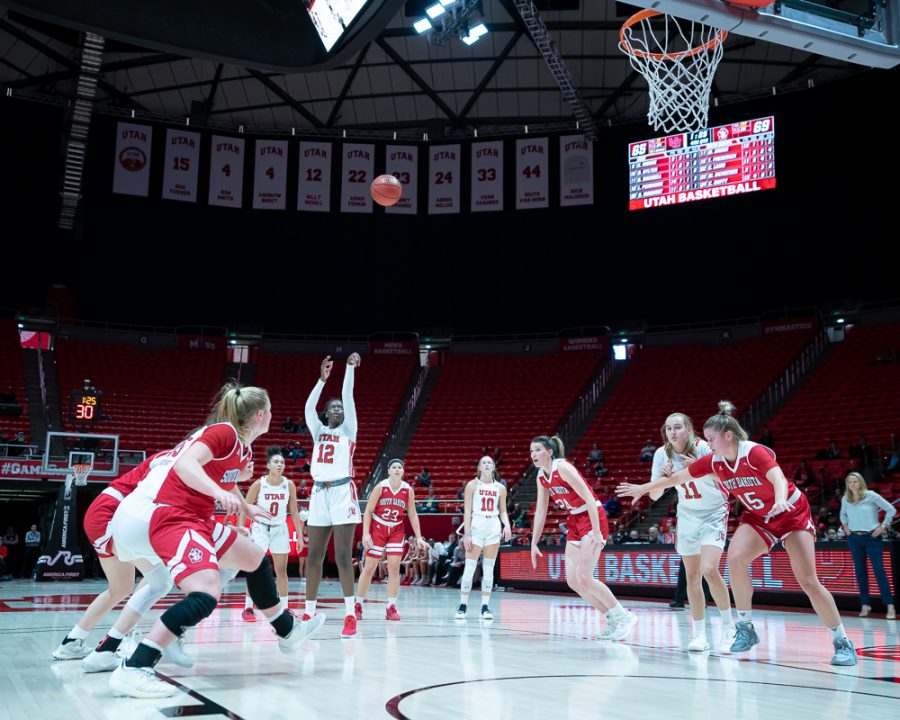 The University of Utah women’s basketball team (0-3, 0-0 Pac-12) lost a tightly contested game to the South Dakota Coyotes (4-0, 0-0 Summit League). The Utes lost 81-84 in overtime, but they showed a never-say-die attitude as they continually fought back from deficit after deficit.

The Coyotes came out strong, opening the game on a 10-0 run before Roberts called a timeout. The Utes followed the timeout by going on a 9-0 run of their own to pull the game within a point. The remainder of the first half was a seesaw affair. At halftime, the game was all knotted up 35-35.

Second Half
In the second half, it was a back and forth game. The Coyotes took a 6-point lead towards the end of the third quarter, before the Utes came back to tie it at the beginning of the fourth quarter. The Coyotes then went on a run to push the lead back to 8 with less than four minutes to play.

The Utes clawed their way back into the game pulling it within one with 41 seconds to play on a layup from Pendande. After a defensive stop, the Utes pushed the ball and Roberts opted to not call a timeout. Gylten found Ola Makurat open for a three, which she buried with 8.5 seconds left to give the Utes a 71-69 lead.

“I got a great pass from Dru [Gylten,]” Makurat said. “I feel like we played very aggressive and we bounced back.”

On the next possession, South Dakota’s Monica Arens drew a foul on Pendande with 5.1 seconds left. Arens made both free throws to tie the game at 71. Makurat’s attempt at a game-winner was blocked as time expired.

Overtime
In overtime, the Coyotes built a 4-point lead before Maxwell was fouled on a three and coolly sank all three shots. After a stop, Gylten led the fast break down the court and scored to give the Utes an 81-80 lead. South Dakota’s Ciara Duffy was fouled on the next possession and split her shots to tie the game.

After a few empty possessions, the Coyotes took an 83-81 lead on a pair of free throws with 29.8 seconds on the clock. The Utes failed to score on their next possession and were forced to foul. With 10 seconds left, South Dakota’s Taylor Frederick split the free throws. Utah brought the ball down, but Kemery Martín’s game-tying three-point attempt fell short.

“It’s unfortunate to not get rewarded by winning,” Roberts said. “But sometimes life’s not fair. It’s kind of the way it works.”

“I am proud of our team’s toughness, we showed some fight,” Roberts said. “Offensively we are still a work in progress, but we scored 81 points. We hit 10 threes. We’ll get there. There’s a lot of new people playing together. You have to acknowledge that. Nine players that have never played together, it’s going to take some time.”

Utah Statistics
The Utes were led by Pendande with 19 points and 9 rebounds. Senior Kiana Moore added 12 points on 4-5 shooting, 3 rebounds and 4 assists. Makurat added 14 points, including 4 three-pointers and 2 rebounds. Gylten led the Utes with 5 assists and added 9 points of her own.

“Lola [Pendande] had a good game,” Roberts said. “They had a hard time defending her. I tried getting her the ball as much as we could.”

“I feel like as coach said, we are still learning how to play with each other,” Makurat said. “We are getting there. I feel like right now is more about us. How we can get better to win the next games. It’s still a process. The atmosphere is great and I feel like it’s getting better.”

Up Next for the Utes
The Utes welcome the Eastern Washington Eagles (0-2, 0-0 Big Sky) to the Huntsman Center Monday, Nov. 18, at 7 p.m. Later in the week, the Utes will head to Honolulu, Hawaii for the bank of Hawaii Tournament from Nov. 22-24.