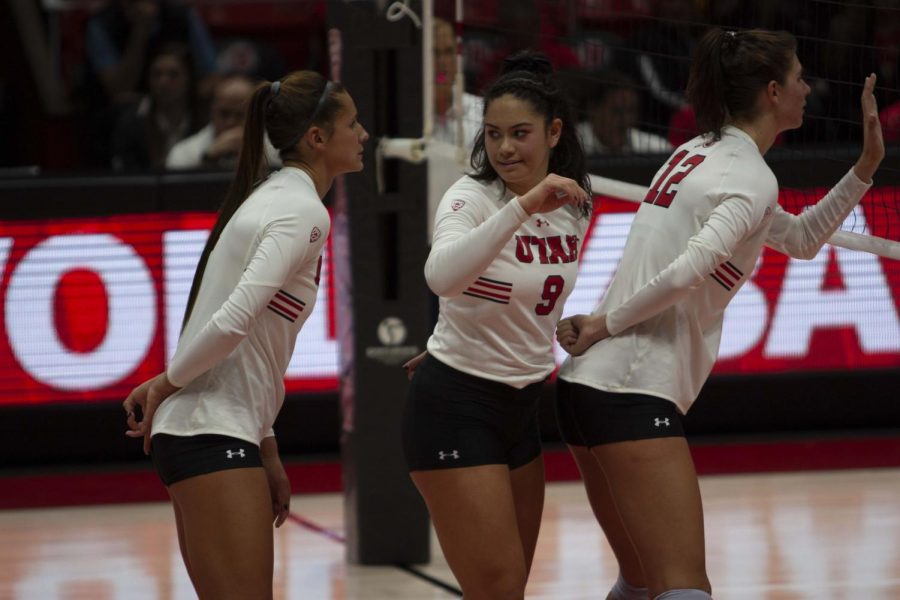 This weekend the No. 16 University of Utah volleyball team is back home in the Jon M. Huntsman Center to take on No. 4 Stanford and No. 24 California. Right now the team is 19-8, 11-5 Pac-12. The Utes are tied for third in Pac-12 play with Washington State.

Last weekend, the Utes were in Washington, where they took on the now-ranked No. 22 Washington State Cougars and No. 10 Washington Huskies. The team beat the Cougars in a quick four sets, but went five sets with the Huskies and lost a hard-fought battle.

The Utes will take on last year’s NCAA Champions the Cardinal first on Friday night at 7 p.m. There will be a celebration for 50 years in the Huntsman. W hen Utah went to Stanford earlier this season, it was a five-set battle where the Utes pushed the Cardinal to their limits but ultimately lost. In the second set the Utes hit .325 had 17 kills and only one error. Dani Drews had 21 kills on the night. Stanford leads the Pac-12 with a 14-2 record. The only two teams they’ve lost to in the Pac-12 are Washington and UCLA, which are two teams the Utes have been able to beat. The last time the Utes beat the Cardinal at home was in 2000, so if Utah can pull off this upset, it will be one for the history books.

Next up, Utah will take on the California Bears, who earlier this season was able to beat the Utes in five sets. At that time, Cal was ranked No. 15, above Utah, and was playing incredibly. Since that time, Cal has lost to USC and UCLA twice as well as Oregon once. The Utes made history earlier this season when they beat USC and UCLA all four times for the first time in program history. Cal is currently 10-6 in the conference and ranked fourth in the Pac-12. They will play Colorado on Friday before coming to Salt Lake on Sunday. The last time the two teams faced in Berkeley, Drews reached her 1,000th career kill and was the 17th player in program history to do so. She had 25 kills on the night and Berkeley Oblad tabbed 11. For Sunday’s match, game time begins at 12 p.m. and both games will be broadcasted on the Pac-12 networks.

After this weekend’s match ups, next week the Utes will have their final home match and senior night when they battle Oregon State on Wednesday, Nov. 27 at 4 p.m.