Jehovah’s Witnesses Proselytize at the Union 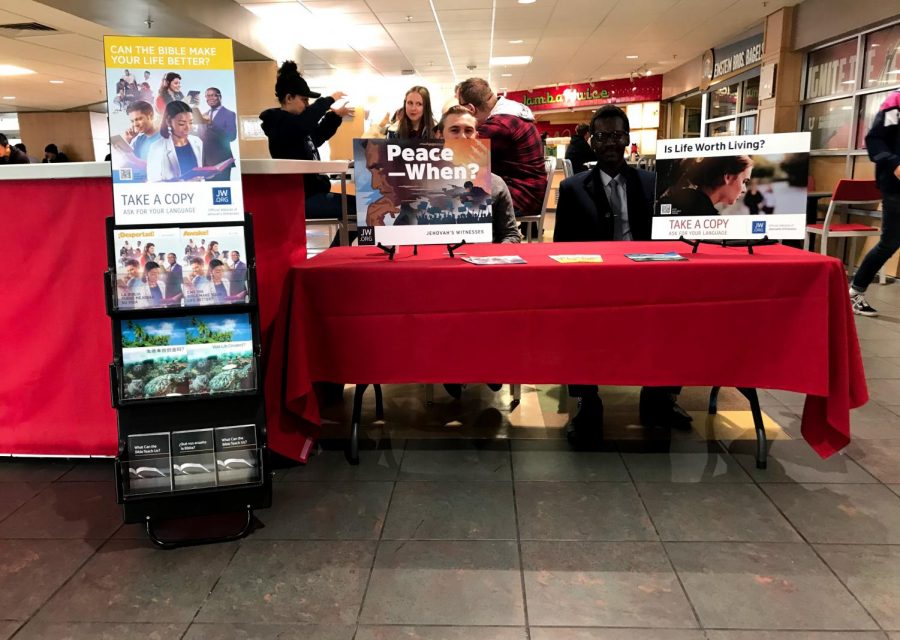 For almost a month, local Jehovah’s Witnesses have spent nearly every morning on campus. They are set up either outside the A. Ray Olpin Union or on the first floor or the Union near the food court. At their tables, two representatives are armed with pamphlets about their religion and a cart full of information. They plan to stay as long as they can — and as long as the University lets them. They are not students but Utah community members.

Jehovah’s Witnesses are known for their neighborhood door-to-door proselyting, but they upped their campaigning in 2011 with a movement centered around literature carts full of bible messages in New York. As of 2015, they set up more than 165,000 carts around the world and have continued the movement since then.

JW.org, the official website for the religion, said “The house-to-house activity is still the primary way in which the Witnesses make known bible truth. Yet, literature carts have proved to be very effective.”

Some of the pamphlets they display are titled  “What does the Bible really teach?” and “The secret of family happiness?” along with signs that read, “Was life created?” and “What is true success?”

They sit in high-traffic areas to try to attract people to their tables.

The JWs also have a table set up in downtown Salt Lake City, near the City Creek mall.

“The point of the table and carts is to be more visible as a religion,”  Yuan said.

Another Jehovah’s Witness, Chris Moore, said the initial reaction they got from students was slow, but eventually, people came up and talked to them.

“Overall, it has been a really positive experience we have had with the community,” he said.

However, they have received some pushback from students. In protest, someone put up a sign that read “Jehovah’s Witnesses are a cult. Change my mind,” next to their table.

Moore said the Witnesses respect this student’s free speech and he ultimately respected theirs, and it was not a problem for them.

Bri Fuller, a freshman English major, said she finds the booths uncomfortable and feels them being on campus is invasive and unwarranted.

“The Union does not feel like it should be a place for religious canvassing,” she said.

Brynn Duncan, a junior pre-business major, said she finds it unfair that a religious institution would be so present on campus because the University of Utah is a publicly funded institution.

On the other hand, freshman pre-med laboratory major Avery Wintle said she rarely notices them and it does not bother her.

“As long as they are not getting in my business, I’m cool with it,” Wintle said.