No. 7 Utah Football Takes Down Wildcats in Tucson 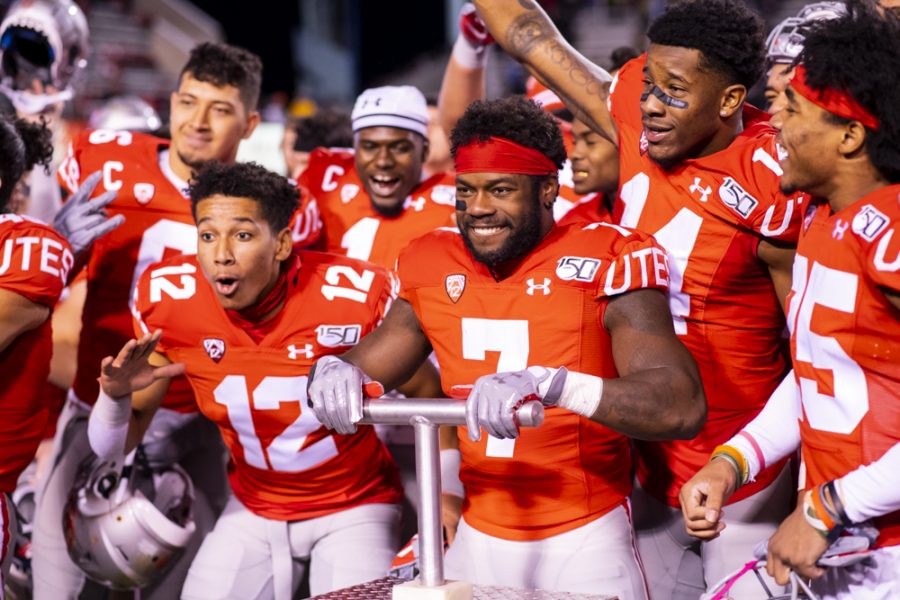 University of Utah sophomore running back Devonta'e Henry-Cole (7) at the Light the U celebration after the end of the game in an NCAA Football game vs. UCLA at Rice-Eccles Stadium in Salt Lake City, UT on Saturday Nov. 16, 2019. (Photo by Curtis Lin | Daily Utah Chronicle)

For the sixth time this season, the No. 7 University of Utah (10-1, 7-1 Pac-12) football team held their opponent to under 10 points on the night. This time the single point game came against Arizona (4-7, 2-6 Pac-12) in a confident 35-7 victory. The Utes need one more win to clinch the Pac-12 south and punch their ticket to face Oregon in the conference championship game.

Both sides of the ball for Utah dominated against the Wildcats. The Utah defense only allowed 196 total yards— 61 on the ground and 135 through the air. Francis Bernard led the team in tackles with 8. Bradlee Anae had 7 on the night and is now 1.5 sacks away from becoming the all time leader in school history, dethroning Hunter Dimick.

Both Jaylon Johnson and Josh Nurse had huge pass break ups on the night.

The lone UA touchdown came with 1:50 left in the game on a Grant Gunnell scramble to the endzone.

On the other side of the ball, three different Utah players rushed for a touchdown on the night. Tight end Brant Kuithe had 2 rushing touchdowns, while Zack Moss and TJ Green accounted for 1 a piece. Tonight’s touchdown marked the first in the career of Green.

Also scoring for the Utes was Demari Simpkins on a 3-yard pass from Tyler Huntley.

Huntley made another case for why he should be in talks for the Heisman Trophy on Saturday when he threw for 211 yards and 1 touchdown. He was 19-23 on the night. He also threw his second interception of the season in Tucson tonight.

Kuithe was Huntley’s favorite target tonight, accounting for 81 yards on 4 catches. Both Simpkins and Moss accounted for over 30 yards receiving and 1-yard short of joining the 30 yard club was Jaylen Dixon, who had 29 yards on the night.

On that night, Moss rushed for 203 yards which is a season high and a few yards short of his career high. Utah ended up rushing for 297 yards on the night.

The Utes finish out their regular season road record 4-1 and look to finish out the homestand undefeated next weekend as they host Colorado for a senior day showdown as the two teams face off for the Rumble in the Rockies.