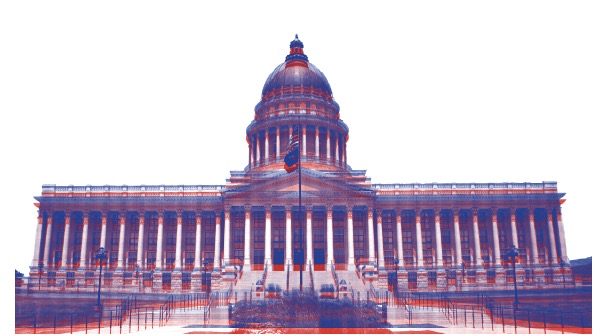 As a resident of Salt Lake City and a student at the University of Utah, I’m constantly surrounded by people who share my liberal values — in school, at my job and even within my religious congregation. While canvassing for Ben McAdams last fall, it seemed everyone whose door I knocked was planning to vote for him or already had. Dozens of the yards I approached had signs reading “In This House We Believe: Black Lives Matter. Women’s Rights Are Human Rights. No Human is Illegal. Science is Real. Love is Love. Kindness is Everything.”

But when I visited my parents in Sandy, seas of Mia Love signs reminded me that my politics – Salt Lake’s politics – are vastly different from the politics of the state at-large.

Even after picking up five seats in 2018, Democrats only make up 24% of representatives in Utah’s House. They are even fewer in the Senate, with just six Democratic senators. Our entire congressional delegation is Republican except for one member. And we haven’t had a Democrat in the Governor’s Office since Scott Matheson, whose last term ended in 1985. With numbers like that, it’s easy to assume that Democrats don’t make a meaningful difference in Utah. That couldn’t be further from the truth.

For one thing, Ben McAdams beat incumbent Mia Love in the 2018 midterms, meaning that Utah once again has Democratic representation in Congress. His victory showed that Utah still wants common-sense leadership, and he has proven that a moderate Democrat can represent Utahns better than extreme Republicans. And, importantly, McAdams represents a geographically small but dense pocket of our state, including much of the capitol city.

Salt Lake City’s liberal persuasion means we consistently elect Democratic leadership – like mayor-elect Erin Mendenhall – who collaborate with and (when necessary) fight back against red officials in the legislature. They are advocates for the issues most important to Salt Lake, like air quality and a clean inland port. Thanks to Democratic values, Salt Lake City Council members are working toward net-zero emissions in our municipality by 2030. These local policies in favor of sustainability and other issues pave the way for the rest of the state as other communities begin to tackle similar problems.

But Utah Democrats do more important work than simply pursuing a liberal agenda. They play an essential role in pulling the state’s hard conservative leadership a little closer to the political middle.

Growing up, I remember learning that my parents registered as Republicans for a few short weeks each election year so they could vote in the Republican primaries – a strategy opinion writers at the Deseret News recently recommended to Dems who “really want to have an impact on the gubernatorial election.” I know my parents weren’t the first liberal Utahns to use that trick. This influence in primary elections keeps the number of Ted Cruz-type Republicans in our state government to a minimum. With Democrats making a fuss at home, even Mitt Romney can’t totally align himself with Donald Trump.

Thanks to this liberal pull, I’m able, even as a Democrat of deep conviction, to respect many of our Republican state leaders and (in some cases) get behind their agendas.

In fact, my priorities align remarkably well with Governor Herbert’s platform. I completely support increased college access and completion, sustainable energy, job creation and self-determination (the umbrella phrase utah.gov uses in reference to health care, public lands and immigration). Herbert sent a letter just weeks ago to President Trump “asking that more refugees be sent to Utah to resettle.” He also argued in a recent press conference that the impeachment proceedings in Washington should be allowed to “roll out,” and expressed disappointment in “the hyper-partisanship on both sides of the aisle” that he said has been exhibited in the process.

Goals and principles like these should be easy enough for anyone to support, even enthusiastically, regardless of their political leanings. And in Utah, thankfully, diverse support for these issues allows for better policy and a healthier civic culture. But we take Utah’s relatively moderate position for granted – red states aren’t always so friendly when it comes to some of those issues. There is nothing on the first page of Louisiana’s government website about welcoming immigrants or investing in clean energy – or Texas’ site, or Kentucky’s. Utah Democrats help us keep our government and policies moderate and representative.

While the majority of Utah’s elected officials are indisputably conservative, there is strong evidence that left-leaning voters do influence leaders’ attitudes and priorities – at least as long as we have enough faith in our influence to show up. Less than a year out from one of the most important elections in most of our lives, now is a good time for Utah Democrats to start thinking about which conservative candidates we can approach in our local races even as we debate which Democratic candidate we want to send to the White House.