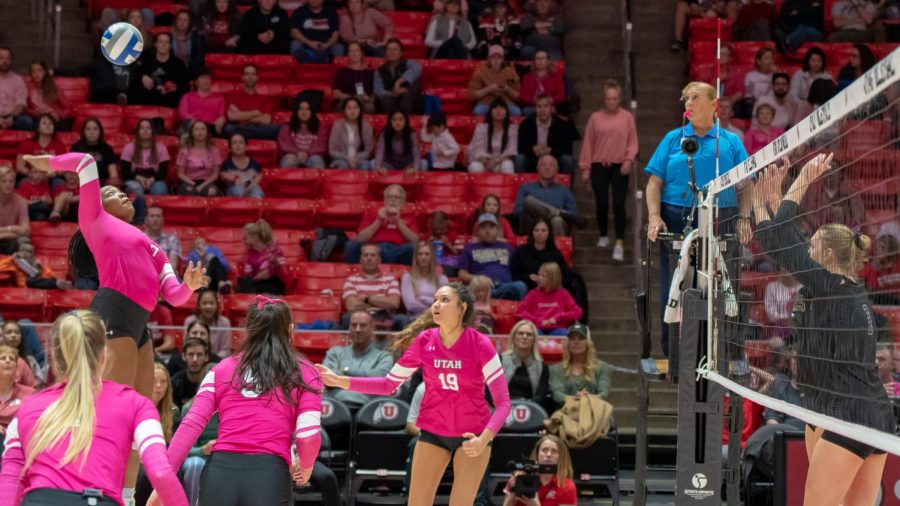 University of Utah Outside Hitter Zoe Weatherington (7) goes for the kill in an NCAA Volleyball match vs. The Washington Huskies at the Jon M. Huntsman Center in Salt Lake City, Utah on Friday, Oct. 25, 2019. (Photo by Abu Asib | The Daily Utah Chronicle)

The University of Utah volleyball team has a strong core of freshmen on the roster this year, and Zoe Weatherington is one of the faces making a difference on the court. Weatherington is a freshman outside hitter from Mint Hill, North Carolina, and she’s already proving her competitive ability for the Utes on her first season. Right now, Utah volleyball is holding onto an 20-9 overall record, and they are 12-6 in the Pac-12.

Weathering ton started playing volleyball around the age of 9, and she has loved it ever since. Her family is very athletic-oriented, so she moved around most her life. Sports are a part of Weatherington’s history — her mom is heading into her fifth year as the head volleyball coach for UNC Charlotte, and her dad is a commissioner for a D2 league called the CIAA.

“I’m an only child, so my parents were like my best friends growing up, and they still are,” Weatherington said. “My childhood was just amazing — they definitely spoiled me.”

This past spring, Weatherington graduated from Charlotte Country Day school, where she played volleyball for four years and was captain for three. She tabbed 1,320 kills, 99 blocks and 875 digs in her high school career. She led her team to the 2018 State Championship and played for the Carolina Rogue club team. Weatherington was named All-State NCISSA four times and was an Under Armour All-American nominee.

“It’s almost indescribable to watch Zoe compete at the highest level of collegiate volleyball. We are so proud of the opportunity she was given to be at the University of Utah and in the most elite league in college sports,”  said Zoe Weatherington’s mom, Karen Weatherington. “Her dad and I are booming with pride for her and the teams success and feel blessed that we can see here play every match on the Pac 12 network.”

When Utah first reached out to Zoe, she was hesitant, because she’d never really thought about attending the U and going to school in Salt Lake City. However, after some research, she couldn’t stop thinking about joining the Utes.

Zoe’s godmother is Kim Oden, who she refers to as “Auntie Kimo.” Oden is in the Stanford hall of fame, and played for the U.S. Olympic team from 1986-1994. In the 1988 Olympics, she was named “best hitter” for her high performance of kills during a game.

“Kim has always been exactly what I wanted to be in volleyball — she’s amazing and I hope I can be even half of what she is,” Zoe Weatherington said. “But my mom is my hero because she’s the hardest worker I know.”

So far in her freshman season, Zoe Weatherington has been a force for the Utes, totaling 260 kills, a .220 hitting percentage and 70 digs. Her best game so far took place against Portland State, where she tabbed 16 kills. When she played against Arizona State at the beginning of this month, she had 17 total points on the game. In the majority of her games this month, Zoe Weatherington has hit double-digit kills. She was also named the Pac-12 freshman of the week on Nov. 11. She is currently ranked 21st in the Pac-12 on the kill list.

“Our favorite moment was watching her compete against her cousin Devyn Cross, senior middle at Arizona,” Karen Weatherington said. “Being able to see two members of our family compete at the highest level was amazing. Our family had watch parties, and many were able to attend the matches at Arizona and in the Huntsman.”

Zoe Weatherington sees her approach to the game as very intense. While playing, she gets very focused and dialed in, but she also loves to be goofy on the sidelines. You’ll catch her either smiling or scolding — often, it’s a little of both. Zoe’s favorite part about competing is winning. While she thinks her strongest part of her game is hitting, she thinks she could improve on passing.

“My teammates make me better because they are just so talented,” Zoe Weatherington said. “The in-practice competition and competing for a spot makes you so much better because you look around and everyone’s amazing.”

After college, Zoe Weatherington wants to go to law school, as she is majoring in international studies. She could also see herself playing volleyball overseas, especially because she has a goal of traveling the world.

Zoe Weatherington’s go-to song before a match is anything by J. Cole, because he is also from North Carolina. She loves to travel and listen to music,  but especially likes going to concerts.

“My goal for this year was to learn as much as possible, the first thing I noticed when I came on my visit was that the coaches were great teachers,” she said. “They could teach me things I’ve never heard before and make me a much better player than I was.”

You can catch Zoe Weatherington and the Utah volleyball team back in action at home this Wednesday, Nov. 27, against Oregon State.