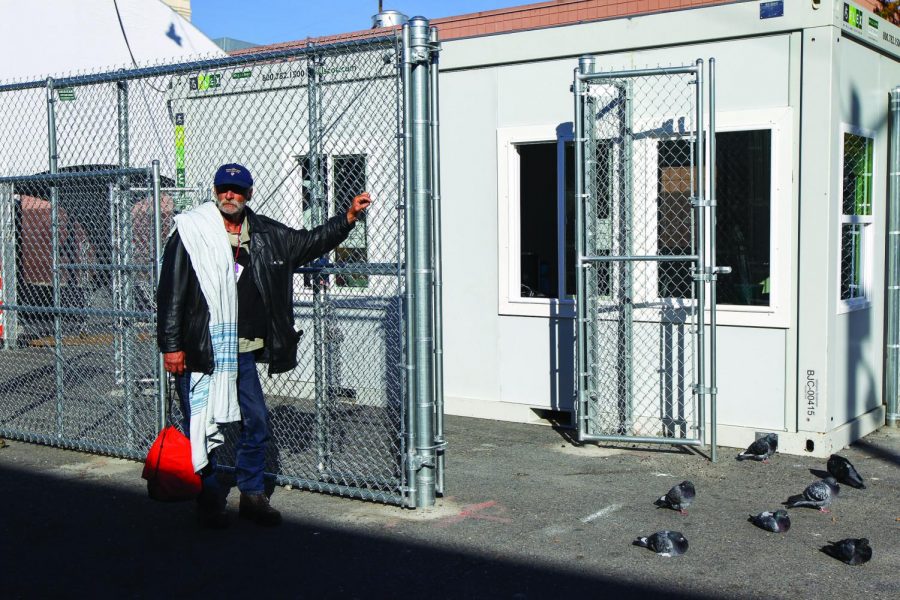 A man stands outside he Safe Space Welcome Center at the Road Home on Rio Grand Street in Salt Lake on Monday, Oct. 16, 2017. (Photo by Adam Fondren | Daily Utah Chronicle)

Record-breaking cold temperatures in Salt Lake City last month made my hands freeze and my frowning face flush to pink. However, when I feel the discomfort of the harsh elements while I walk around downtown or on my way to class, I have the opportunity to fall into my own bed each night under a roof that holds the warmth and light of my apartment. This city is occupied by many fortunate residents who are housed and insulated from the icy air, downpours and heavy flurries of snow.

Not everyone shares this luck, though, and the number of our neighbors who are experiencing homelessness is distressing. This crisis demands urgency and compassion, especially as Utah enters its colder seasons. The elected and appointed who are charged with the welfare of these people are falling short by allowing shelters to close. The Road Home’s large community shelter downtown must remain open through the upcoming months. This closure comes at the cruelest of times and the decision to continue as planned in pursuit of the noble course of “housing first” should be given a second thought. Empathy and human rights needs to replace the injurious tone of Salt Lake’s approach to Operation Rio Grande.

A Look at the Numbers
Data from this year confirms that the total number of people experiencing homelessness in Utah has remained “stable.” In 2019, the number of sheltered and unsheltered homeless persons in Utah is 2,798, 66% of which are located in the Salt Lake County area. The heart-wrenching subpopulation data confirms what we already know — homelessness is a much more complex emergency that requires solutions beyond arrests and citations. The 2,798 individuals include survivors of domestic violence, veterans, unaccompanied youth and people living with substance abuse disorders and mental illness who are in need of shelter and resources.

While a transition away from the large shelter downtown and toward more focused shelters dispersed throughout the city is positive, the number of people without a place to stay warm this winter is too large and dangerous. The Road Home’s downtown location in the Rio Grande neighborhood has significant problems, but its complete closure is irresponsible and callous.

I’m proud of the work our policy makers and elected officials have done to boost affordable housing and to develop three new homeless resource centers with focused resources. But at the same time, a simple count reveals a shortage of beds. The reasonable, humane approach would be to staff the Road Home through the winter. The downtown shelter has a capacity of 1,100 beds, and the new facilities only hold 700 people total — a capacity reduction of 400 people. We should celebrate the progress of the new facilities, but we can’t leave 400 people behind. The goal of getting more people into long-term housing should remain, but are we so fixed on that priority to forget about the people who will have to brave the elements this winter?

Getting people into homes, off the streets and connected with adequate health resources is absolutely the way to move forward as a community. Nonetheless, we have a responsibility to provide temporary shelter at the Road Home during these upcoming months. Keeping the space open won’t be a “step backward,” as some suggest — people freezing to death, losing fingers and facing hypothermia will be.

Operation Rio Grande
As part of the plan to transition to the new resource centers, law enforcement in the Rio Grande neighborhood will narrow into an “appropriate winding down.” It’s important to ask whether the heavy presence of law enforcement was appropriate in the first place. Operation Rio Grande kicked off two summers ago with efforts to restore “law and order” that were questionable, especially after a recent analysis by the ALCU has confirmed the injuries and damage done by removal by force. Arresting people for low-level misdemeanors is cold and counterproductive. In the first month of the operation, 64% of the arrests were “classified as misdemeanors or infractions.” Roughly 26% was for low-level crimes such as “open container violations, jaywalking, lewdness or camping on public ground.” Essentially, we made it a crime to be without a home in Salt Lake City.

Of course, the neighbors, business owners and passersby of the Rio Grande neighborhood ought to feel safe. There is no doubt that the crime, violence and drug abuse needed a solution from lawmakers. However, criminalizing and policing our way out of this problem did not put us in a position to confront the root cause. “Arrests and fines do not easily vanish,” according to the ACLU, and if the intention was to help people get on a healthy track, penalizing individuals without options for camping on the sidewalk was a misstep. The consequences of arrests and relocation undermine the efforts to help people onto their feet.

The state is highly capable of walking and chewing gum at the same time. We can postpone the closure of the Road Home’s facility on Rio Grande and still continue the great work of housing first and the facilitation of treatment and care in the new homeless resource centers. We are also better than the criminalization of homelessness, and policies like Operation Rio Grande should not be repeated as progress is derailed when falling back on heavy law enforcement to “restore” order.