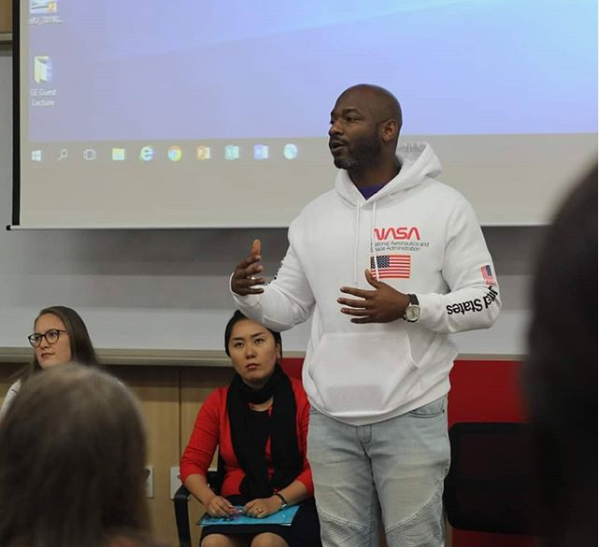 Na'im Eggleston, Assistant professor of Writing & Rhetoric Studies Department at the UAC, sharing his opinion regarding mental health issue at the open session on October 17th. (Courtesy of Alaina Choi and Atelaite Mapa)

The University of Utah Asia Campus hosted an open session about mental health on October 17th. Faculty, staff and students participated and shared their perspectives regarding mental health. The school also began a social media challenge going from October to December and will pick four random winners at the end and give them prizes. 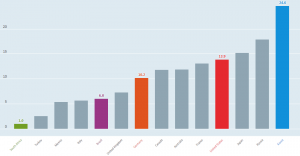 The World Health Organization has asserted that mental illness is the greatest overriding burden of disease in the majority of developed countries, and that the socioeconomic burden of mental disease will exceed that of cancer and cardiovascular disorders in the future, according to a report in the international journal of mental health systems. Three out of ten adults experience mental disorders more than once throughout their lifetime in Korea.

On the other hand, 19.1% of American adults experienced mental illness in 2018 — 47.6 million people. This represents 1 in 5 adults, according to the National Alliance on Mental illness.

Since UAC’s opening, 41 individuals — 16 male and 25 female — made 124 appointments for counseling from Jan Lee, Mental Therapist of the Incheon Global Campus.

The issues students went to get counseling for include but are not limited to: relationships at 21.1% being the highest, academic issues at 16.4%, anxiety at 13.8%, and substance abuse being the lowest at 1.3%.

“I have difficulties with feeling sad and anxiety, but I usually try to be positive. I always wanted to get a sense of belonging. But because of my condition, it was not always easy to get along with or be part of [friend] groups,” Cho Gwang Hee, a psychology major at the UAC, said. “Accepting yourself is the first step to dealing with issues in your life. If you cannot accept yourself, expecting others to accept you is wrong.”

“I was diagnosed with a mental health condition when I was 28 years old. And that had been 15-20 years after I had already had it. But one of the things that was really powerful about the diagnosis was that I could better understand my experience. And with that came a willingness to talk to therapists and counselors,” Na’im Eggleston — assistant professor of Writing & Rhetoric Studies at the UAC — said at the open session. “The more that I was able to get in touch with what was driving the symptoms, the more I was able to free myself of that. I know the first thing that might drive you is to hide.”

Kera Lovell — assistant professor of history at the UAC — shared her experience about such issues. “There was a really big flood in my hometown in 1994, and thousands of people were homeless. They arranged for all of the kids to go to therapy sessions in huge basketball gyms. It was very much traumatizing to just lose your home instantly. So even though [therapy] was a normal aspect of my life, it still carries a stigma.” Like Eggleston, Lovell spoke of how to deal with mental health issues.“The first step is coming out to yourself that you need a problem and that you need help.”

The UAC will host an annual project symposium — a research and creative arts competition — on December 4th, and the winners of this event can also get prizes.