No. 6 Utah Football Set for Senior Day Showdown Versus Buffs 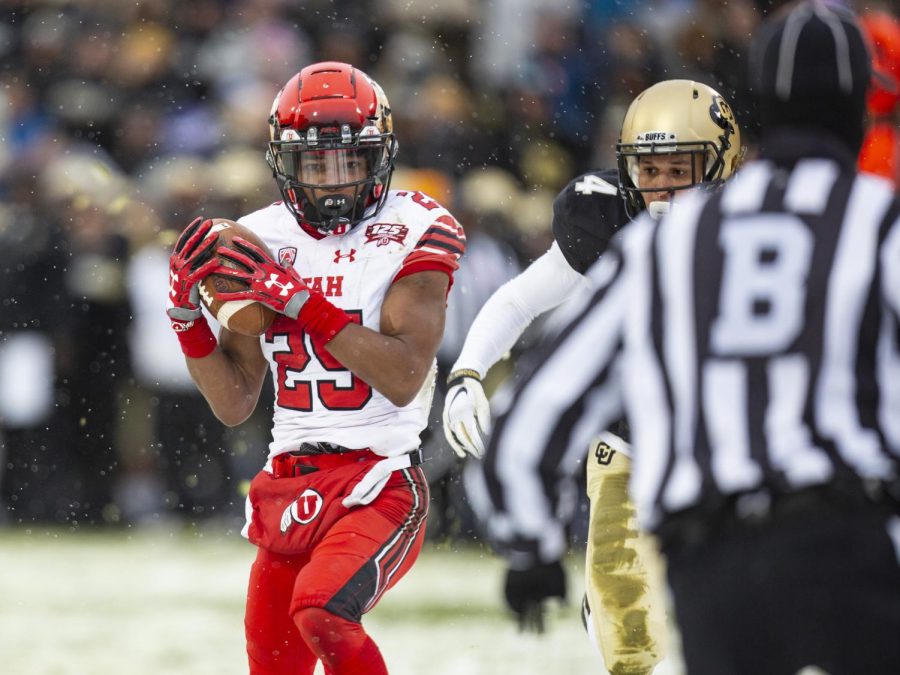 University of Utah freshman wide receiver Jaylen Dixon (25) brings down a pass and runs into the end zone at Folsom Field in Boulder, CO Saturday, Nov. 17, 2018. The Utes beat the University of Colorado Buffaloes 30-7. (Photo by: Justin Prather | The Utah Chronicle).

For the final time this season the No. 6 University of Utah football team (10-1, 7-1 Pac-12) will grace the field of Rice-Eccles Stadium for their regular season finale versus conference rival Colorado (5-6, 3-5 Pac-12). In last year’s matchup in Boulder, the Utes stomped the Buffs 30-7 and clinched the Pac-12 south in the process. Fans are being encouraged to arrive early to celebrate one of the best senior classes the Utes have ever seen.

Scouting the Utes
The Utes are coming off a silent but deadly victory over Arizona, 35-7. With that victory, the Utes mark their second best record under head coach Kyle Whittingham. In the win last Saturday, senior running back Zack Moss became the first player in Utah football history to rush for 1,000 yards in three separate years.

For the fifth week in six weeks, a Utah defensive lineman was named to conference honors. This week Bradlee Anae was honored, making it the third time he has been honored by the conference. Anae had the lone sack in the game and took another step towards becoming the all time sack leader at Utah. Francis Bernard lead the team with 8 total tackles.

In last week’s win, Tyler Huntley proved once again why his name should be in talks for the Heisman trophy as he threw for 211 yards, 1 touchdown and 1 interception. Brant Kuithe lead the team in receptions with 81 yards. Kuithe also rushed for 2 touchdowns in the victory. Moss rushed for his first 200 yard game this season in Tucson as well. He accounted for 1 touchdown as well. Demari Simpkins and TJ Green also scored for the Utes.

Scouting the Buffs
Colorado is coming off a surprising win over Washington 20-14. With the win, the Buffs need one more win to become bowl eligible under first year coach Mel Tucker.

Quarterback Steven Montez has seemed to struggle at times this season, going 238-379. He has thrown for 2,651 yards, 15 touchdowns and 10 interceptions on the season. His favorite target has been junior Laviska Shenault Jr., who has 52 receptions for 721 yards and 4 touchdowns.

On the rushing side of the game, Alex Fontenot has rushed for 825 yards on 172 carries and has 5 touchdowns.

The Colorado defense on average is allowing 148.7 yards on the ground and 299.5 yards through the air. On average, they allow opponents to score 30.6 points per game.

Mascot Matchup
Earlier this season, it was sadly announced that Colorado would be retiring Ralphie V. In my journey to Boulder last season, the only thing I wanted to see was Ralphie run. Unfortunately, due to the snow, they didn’t run the famous Buffalo. Instead Chip, their other mascot, ran with the handlers. While it was cute to watch, it wasn’t the same.

But this week, we will see Swoop and Chip go at once again. In last year’s snow matchup, the bird and buffalo had a snowball fight — if anyone wants to see the video of the fight when I filmed it from the press box, hit me up on Twitter @s_mora99. While Swoop came out on top of the fight last year, my heart tells me to go with Chip this week. He is just so cute, and I wish I could have him as my own.

How to Watch
The game is set to air on ABC in the primetime time slot of 5:30 p.m. On the TV broadcast will be Steve Levy, Brian Griese, Todd McShay and Molly McGrath. The game will also be broadcast over the airways of ESPN 700 with Bill Riley, Scott Mitchell and Tom Hackett on the call.