No. 6 Utah Football Clinches South with Win Over Buffs 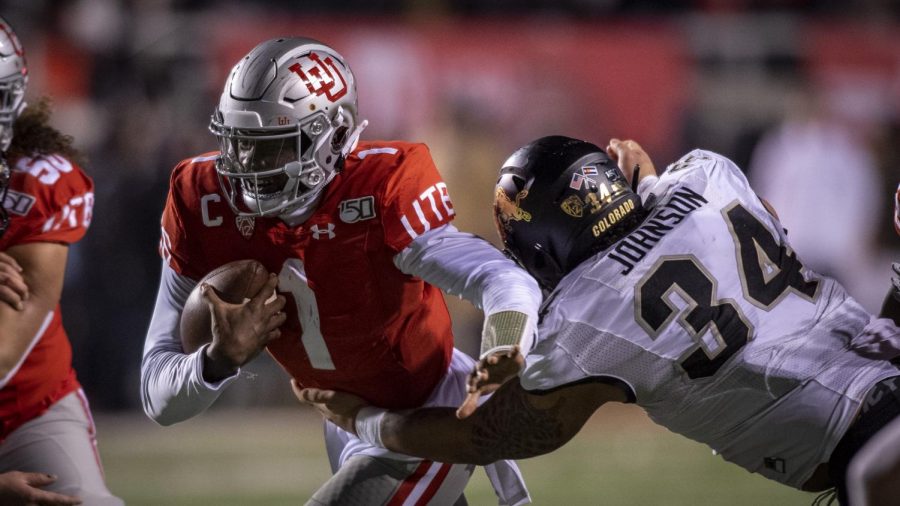 It was a senior night for the ages as the No. 6 University of Utah (11-1, 8-1 Pac-12) finished their journey to clinch the south division of the Pac-12 tonight as they took down Colorado (5-7, 3-6 Pac-12) 45-15. With the win, not only do the Utes earn a spot in the title game versus Oregon next week, but they also celebrate winning the south division for back-to-back years.

Earlier in the week, Head Coach Kyle Whittingham, among others, made a push for fans to be in their seats early for Senior Night. The fans turned up in droves yelling and screaming their appreciation as the seniors entered the field through the tunnel.

“It felt great,” said wide receiver Demari Simpkins. “I almost cried — well, I did cry, I’m not going to lie to y’all. It’s amazing how much support we get from our fans, our family, our teammates and especially the MUSS. We’re just blessed.”

While the box score shows that it was Utah’s game from start to end, the team started slow, punting on all three of their first drives. So you may be wondering — why the slow start?

“It was cold,” said quarterback Tyler Huntley, with his trademark ear-to-ear smile. “How many degrees was it? Probably like 12?”

After the end of the first quarter, things blew wide open for the Utes. “It was a matter of warming up,” Huntley said.

Brant Kuithe had a career night, scoring 2 receiving touchdowns while also scampering for 1 additional touchdown in the fourth quarter. Huntley continued to do Huntley things, going 14-17 for 165 yards and 2 touchdowns on the evening.

“I just think of it like every other game — the seniors lead and we follow. Each year after that we’ve got to take the reins and they did a great job this year,” Kuithe said. “We still have a lot more games left, so they’re going to lead us, we’re going to follow and then go win that s—.”

In his final game at Rice-Eccles Stadium, Zack Moss added 88 more yards to his career total while also adding another touchdown to his name. Along with his 1 touchdown, Kuithe rushed for 59 yards. Devin Brumfield also found the endzone tonight for the Utes.

Simpkins had a big game as the team’s punt returner as well. He ran a Colorado punt back 66 yards for a touchdown.

On the defensive side of things, Bradlee Anae had 1.5 sacks on the night. With that line, he is tied Hunter Dimick for the most sacks in one’s career. Both Mika Tifua and Devin Lloyd also recorded 1.5 sacks.

While tying the record is all fine and dandy, Anae is still focused on one goal.

“I wanted to break it tonight, but that wasn’t the case,” Anae said. “The stat people gave me a half of a sack on that last one, but it’s all good. I’m just grateful.”

Utah’s defense also held the Buffs to under 100 rushing yards, solidifying them as one of the best defensive lines in the country.

And now the team’s focus turns to their next opponent — Oregon. While the team hasn’t had time to start scouting the Ducks, head coach Kyle Whittingham had some complimentary things to say about the team from Eugene.

“Monday is more like a Tuesday and Tuesday is more like a Wednesday,” Whittingham said, “We’re going to have some meetings tomorrow to get ready for that. We’ve done it before. It’s nothing we haven’t got a plan for or have mapped out. Oregon’s on the same schedule, so it’s equal footing for both teams.”

Whittingham called Oregon an “explosive team with a good defense. They’ve got a lot of good athletes in the secondary. I believe they lead the Pac-12 in interceptions, which is usually a good barometer of your athleticism in the back end, and they’ve got some tremendous athletes.

The Utes and Ducks will face off next Friday to find out who is the best in the conference.

“It’s been a long time coming, and a lot of us stayed back for this very reason, and it’s just all about finishing and giving it our all,” Anae said.