Visibly Pregnant Harry Styles Comes to the U 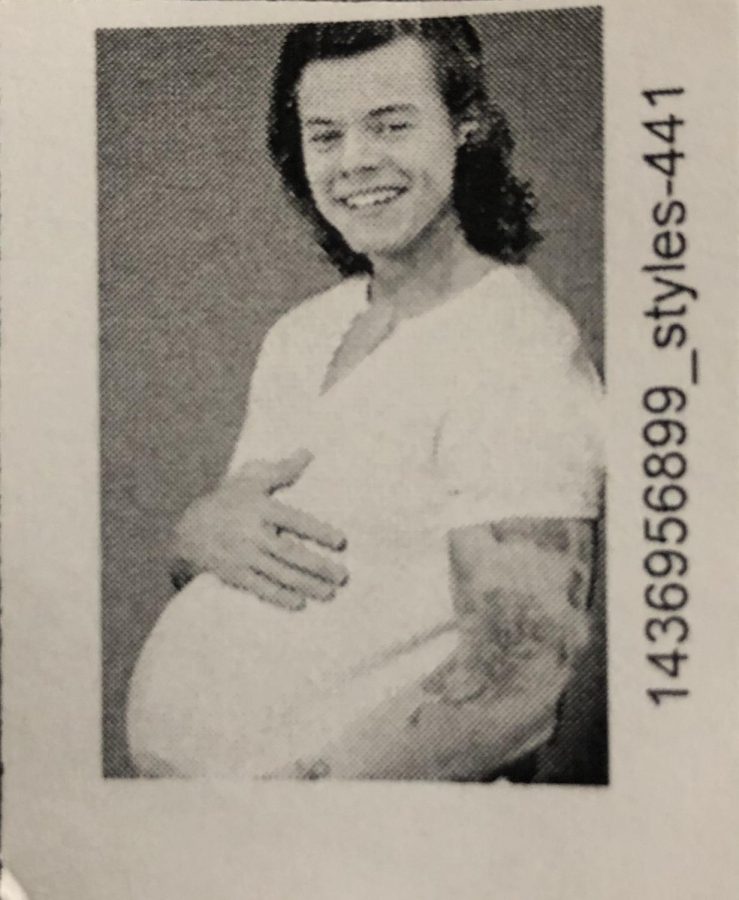 Last week, hundreds of photos of a visibly pregnant Harry Styles made their way onto the University of Utah campus. This is the third event in a series of pregnant Styles photo distributions, but this is the first time it has made it outside of Utah County.

“When I went to the library, they were all over,” said Kaedyn Crabtree, a psychology student at the U who received one of these photos. “She was wearing sunglasses and kept a straight face while handing them out.”

These photos were previously spread at Utah Valley University and Brigham Young University last month. Olivia Diaz, Senior Staff Reporter for UVU, said, “I was just hanging out in our classroom building, and this girl came by, gave everyone a bunch of pictures — there were just these tiny little pieces of paper — and I thought it was like ‘come to this party,’ ‘come to his event,’ something like that. Then I turned it over and it was a tiny pregnant Harry Styles.”

Diaz reported seeing the pictures in locations like bathrooms, the library and on car windows. Each time, a woman wearing sunglasses with a bun has been documented as the culprit. These photos, roughly 1 inch tall, each have the text “1436956899_styles-441” printed on their right sides. A simple Google search of this text brings up the same photo that was distributed.

“People at BYU said that they found them in their apartments,” Diaz said. “She slipped them under the door.” Diaz also said that she found photos on her car as well as every car in the four rows surrounding hers.

UVU Review’s editor-in-chief, Zachary Smith, saw the girl handing the photos out. “We were tabling,” said Hunter Lock, layout designer at UVU Review, who was with Smith, “and this woman comes out of the crowd … and she blows a kiss at us and she blows thousands of these Harry Styles photos at us and runs away.” Smith chased after her, but lost her. Then, a thought occurred to Smith and Lock: “What if we got surveillance footage?”

UVU Review submitted a GRAMA request — a request for unpublished government information — for the surveillance footage of the girl running away. “It took a couple tries, but we got surveillance footage back. It’s delightful,” Lock said. “At the last second, she turns to look back … and so we see her image. We see her face. She made the mistake of turning around.”

Taylor Steele, a student and custodian at UVU, said that while the distributor wasn’t her, she “found her stash [of photos] in one of the auditoriums on campus after close,” she said via a Twitter message. “She must have forgotten it.”

It is unclear how many photos were handed out, though Steele estimates the number to be in the thousands. “The bag I found had somewhere between 1,100 and 1,500,” she said. The podcast “Dear Hank & John,” hosted by Hank and John Green, recently discussed what to do with a “bag full of 1500 pictures of pregnant Harry Styles,” according to WYNC Studio’s website.

Steele said that she mailed the Green brothers a bag of 1500 photos. “Hank and John Green are helping the ‘Harry Fairy’ spread the pictures all over the country, maybe even internationally,” she said. “It’s gotten bigger!” On Nov. 27, Steele tweeted:

The photo of Styles appears to originate from this 2015 tweet captioned, “First exclusive baby bump photo of the mother of Louis Tomlinson’s child.” At the time, Tomlinson had just announced that he was going to be a father, and the jokes about Styles’ and Tomlinson’s potential forbidden love took off.

Strangely, this is not the first time someone has imagined Styles pregnant. There are over 60 fanfics featuring a pregnant Styles on Archive of Our Own. Of these, four meet the length of a novel (roughly 50,000 words) and six are over half the length of a standard novel. This could be, in part, thanks to videos (including this 11-minute compilation video) of Styles asking fans about being pregnant during concerts. More conspiracy-based videos have also been released, some of which present a series of photos as evidence to suggest that Styles is pregnant with Tomlinson’s child. Styles also recently appeared on a “Saturday Night Live” skit about a childbirth class, though in it, he was not the pregnant one.

“I’ve been a Harry Styles fan from day one, so obviously I thought it was hilarious and I hope it’s my baby,” Crabtree said.

Diaz said that UVU Review plans to turn this into a three-part miniseries, and they may know the identity of the distributor. This article will be updated as more information comes.