The Red Rocks Run Towards the 2020 Season 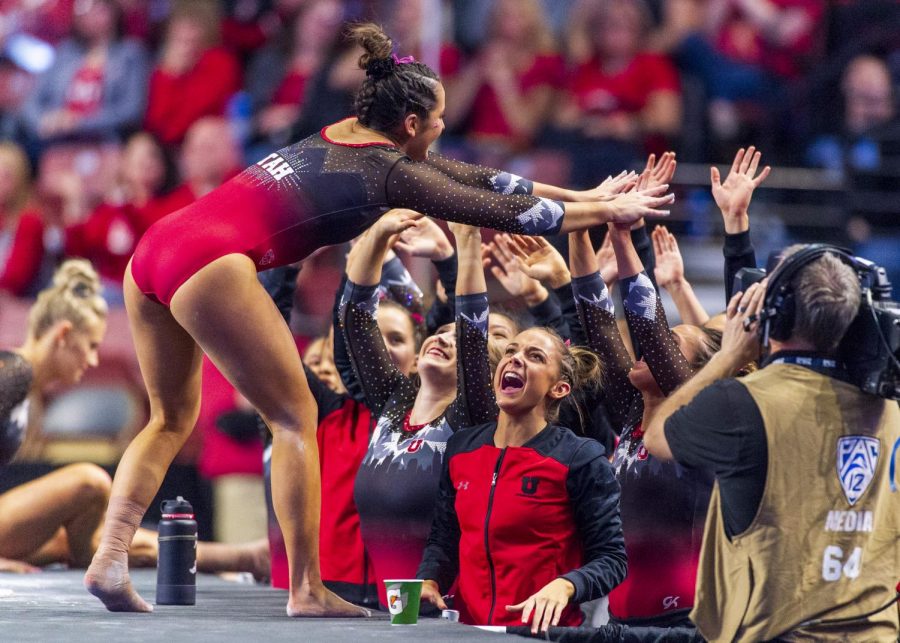 After finishing in seventh place in last year’s NCAA Championship, the University of Utah Red Rocks gymnastics team is preparing for a season full of new opportunities. The Utes wrapped up the season 8-2 overall and 5-2 in the conference, and heading into this new season, there are quite a few new faces on all sides of the team that fans will need to get to know before the season starts on Jan. 3, 2020.

Departures
Not only did the Red Rocks lose head coach Megan Marsden to retirement, but the team lost four seniors and one other athlete to the U.S. National team.

While MyKayla Skinner has one final year of eligibility left, she opted to not come back to the team this season in order to focus on qualifying for the U.S. Olympic team. She made the first step to making this dream a reality when she was named to the 2019 World Championship Team.

Additions
The Utah coaching staff has a whole new look this season as Tom Farden makes his debut as the lone head coach of the Red Rocks. Farden also brought on an entirely new staff to round out his coaches. Though she was on staff last season, Carly Dockendorf has been promoted to assistant coach from her previous position as the director of recruiting and player development.

Assisting Farden this season is Garrett Griffeth. Griffeth comes to Utah via Arkansas, where he was the associate head coach for the Razorbacks. Griffeth’s main focus for the team will be the vault as well as focusing on recruiting.

Rounding out the coaching staff is Courtney McCool Griffeth. She is the wife of new assistant coach Garrett Griffeth, and she comes to the team after also being on the coaching staff at Arkansas. While she is the volunteer coach here at Utah, Courtney will be focused on choreography for the team’s floor routines as well as coaching on the event. She will also focus on coaching the beam.

The Red Rocks welcome four new freshmen and one transfer to the team this season. Jaedyn Rucker is one of the four new freshmen who will be suiting up for the Red Rocks this season. Rucker comes to Utah from Mesa, AZ. Rucker will be an all-around competitor for the Red Rocks. She is a Junior Olympic national champion on the vault, and she finished in second place in the all-around category at J.O. nationals in 2018.

Jillian Hoffman will also be an all-around competitor for the team this season. The Murrieta, California native is also a J.O. national champion. In 2017, she claimed the title in the bars and floor as well as the all-around competition. In 2018, she took second on the floor.

The Red Rocks headed to the midwest to bring in Abby Paulson. The Anoka, Minnesota native will be an all-around competitor for the team. She was a member of the 2017 U.S. Senior National Team and was also on the International Elite for five years.

There is one gymnast that has more hype than the others. Maile O’Keefe is the most decorated of the freshman class. She was a three-year member of the U.S. National Team as well as a qualifier for International Elite in 2013. O’Keefe will be another all-around competitor that fans might see sooner in the season than the other freshmen on the team.

Breaking Down the Schedule
The Red Rocks will host five meets at home this season, including one against an SEC team.

Fans will get their first glance of the team on Dec. 13 as they host their annual Red Rock season preview. The meet will start at 7 p.m.

The regular season will kick off on Jan. 3 as the Red Rocks host Kentucky for the first time in Salt Lake. This will be the second time in program history that the Red Rocks and Wildcats have met. The first time was in 2018 when both teams were in the same NCAA semifinal meet.

On Jan. 11, the team will travel to the Maverik Center in West Valley City to compete in the Best of Utah meet, which will feature gymnastics teams from around the state. The Red Rocks will compete in the quad meet with BYU, Utah State and Southern Utah. This meet will be the first of two podium meets that the team will be a part of this season.

On Feb. 15, the team will be back at home to host Oregon State. The Beavers, who made it deep into the postseason last year, will give the Red Rocks a test at the Huntsman Center. When the two faced off in Corvallis last year, the Red Rocks rolled over the Beavers 197.150-195.450.

All eyes will be on ESPN2 on Feb. 23 when the Red Rocks will face off against fellow powerhouse UCLA in Los Angeles. The Bruins edged out a victory over the Red Rocks last season 197.625-198.025. This matchup should be fun to watch since both teams have new coaching staff and are without key members of the teams from last season.

The Red Rocks will close out the regular season with a pair of home meets. The team will host Stanford on March 6 and Utah State for Senior Day on March 13. The Red Rocks easily defeated Stanford twice last season while the Red Rocks and Aggies haven’t met in a dual meet since the 2012 season.

The road to the postseason will start on March 21 when the Red Rocks will compete in the Pac-12 Championship.