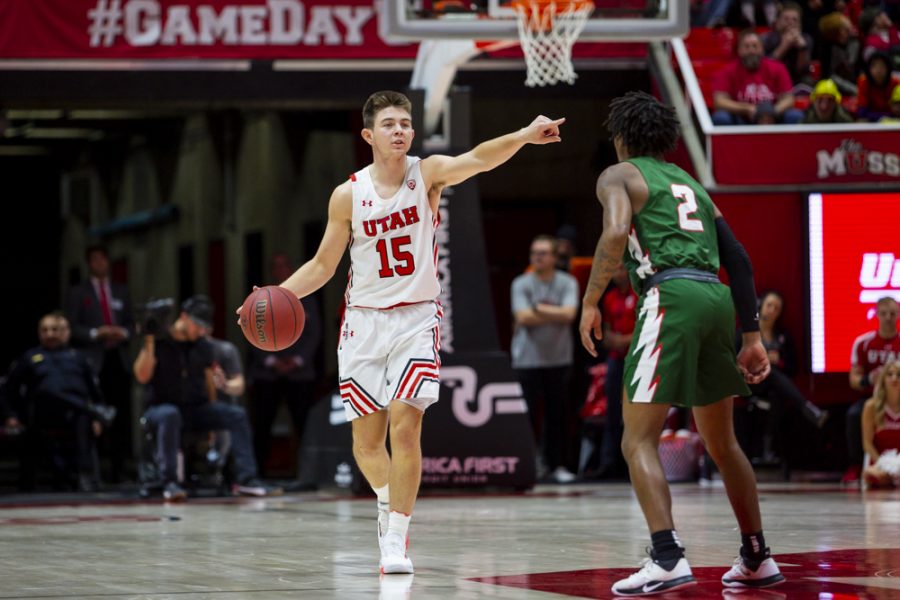 The Runnin’ Utes faced off against the UC Davis Aggies last Friday night, winning by a score of 77-73. Utah was able to jump out to an early lead before holding off the Aggies for a victory on the night. This season, the Utes have had four of their seven games end in a difference of five points or less.

Riley Battin had a 15-point showing against UC Davis on Friday, tying his season-high performance against Mississippi Valley State. Battin also had six rebounds and one assist on the night.

Both Gach finished with 11 points, two rebounds and six assists against the Aggies. Gach’s presence is felt among the fans and his teammates as one who can explode with a great game at any moment. Keep your eye on Gach against the Cougars and Bears this week.

Timmy Allen was once again a terror for the Aggies to go up against. Allen was only six points shy of his season high against Mississippi Valley State alongside tying his season high in assists. He notched 20 points while also tallying four rebounds and three assists on the night.

Rylan Jones was a force to be reckoned with last Friday night, scorching the nets for a career-high 18 points partnered with two rebounds and five assists. Jones has showed a lot of determination and effort this season. Expect that effort and determination to continue to be pushed up a few notches against BYU on Wednesday.

Branden Carlson didn’t play against the UC Davis Aggies due to an injury sustained in practice last week, but Utah fans can expect him to be back in action against the Cougars and Bears. His matchup with Yoeli Childs will be a fun one to watch — two big men from Bingham High School duking it out in the Deseret Duel.

BYU Players to Watch Out For

Childs was suspended by the NCAA for the first part of the 2019 season following difficulties in returning to college ball from the NBA draft. He will be making his return against the Utes on Wednesday. Childs’ 2018-2019 season high in points came against the Utes in 2018 as he scored 31. Last season, he averaged 21 points and 10 rebounds per game.

Jake Toolson has come on strong for the Cougars during the 2019 season. The transfer from Utah Valley has averaged 15 points per game during his senior season for BYU. Last year, Toolson was the WAC Player of the Year, and received an AP All-America Honorable Mention.

Central Arkansas Players to Watch Out For

Rylan Bergersen is a transfer from BYU, averaging just over 14 points for the Bears in 2019. Bergerson is also averaging about five boards per game. Keep your eye on him shooting the ball from beyond the arc and creating plays for his teammates.

Eddy Kayouloud is from Paris, France and played his high school basketball at the famous Oak Hill Academy. Kayouloud is averaging 14 points per game alongside six rebounds per game. Watch for his matchup against Carlson and the battle of the boards on Friday night.

Utah will head down the street to take on the Weber State Wildcats at Vivint Smart Home Arena on Saturday, Dec. 14, 2019. The matchup will take place at 2 p.m.

Central Arkansas will travel to Malibu, California to face the Pepperdine Waves on Dec. 14, 2019 at 7 p.m.

Both games will take place at the Jon M. Huntsman Center. Game 1 against the Cougars will be on Wednesday at 6 p.m., and the matchup against the Bears will be on Saturday at 3 p.m. If making it to the game isn’t an option, both games can be seen on Pac-12 Networks and can be listened to on ESPN 700.