Head to Head: The Daily Emerald 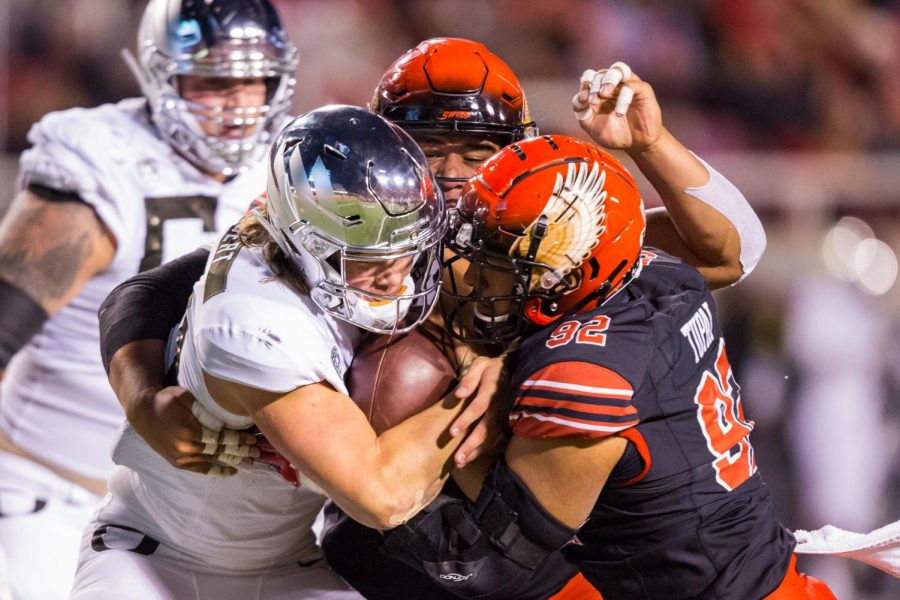 The journey to the Pac-12 Championship is finally over for the No. 5 University of Utah football team. Before the big game on Friday, I sat down with Brady Lim of The Daily Emerald at the University of Oregon to talk about the Utes and Ducks.

Sammy Mora: This week will be the first time that these two teams have met since last season, when the Utes beat the Ducks. What have the Ducks done this season to get them to the championship?

Brady Lim: The Ducks’ loss last season in Salt Lake came at a tough spot in their schedule. They had inexplicably got blown out by Arizona two weeks prior, and their Pac-12 Championship hopes were long gone by then. It was on the road in a tough environment, and, to be honest, Oregon didn’t stand much of a chance in that game against a very good Utah team.

This year, the Ducks have a lot to play for — Pac-12 title, Rose Bowl berth, all that. And the 2019 team is a better team overall. The defense has kept the team in every single game, and Justin Herbert and company have, for the most part, been efficient enough on offense to win.

There was a portion of the season in October and early November when Oregon absolutely looked like one of the best teams in the country. Its receiving corps was finally starting to get healthy, and everything seemed to be coming together for a run at the Playoff. Then came the loss to Arizona State, in which the offense looked completely dead for three and a half quarters. The following week against a bad Oregon State defense, it didn’t look much better.

The Ducks aren’t coming into this game playing their best football, but it’s in there somewhere. I’ve seen it as recently as last month. Whether that Ducks team shows up, however, remains to be seen.

BL: This matchup at the line of scrimmage reminds me a lot of Oregon’s season opener against Auburn (which picked up a big win for the Utes in the Iron Bowl, by the way). The Tigers’ front line is one of the best in America, and Oregon’s experienced offensive line handled them for most of the game. An untimely turnover and dropped touchdown in the end zone ultimately cost the Ducks that game, but their offensive line proved they can hang with anybody.

Left tackle Penei Sewell is far and away the best of the group. He’d be a top-five NFL Draft pick right now, and he’s only a sophomore. The rest of the line are all seniors, so the big stage of the Pac-12 Championship shouldn’t be an issue.

That said, however, this Utah defensive front is the best I’ve seen in college football this year and Oregon’s running game has stalled on more than a few occasions. I expect the Utes to control the trenches and force Herbert into throws on obvious passing downs.

SM: The Oregon offense has a lot of well-known players. Who is someone that fans might not know a lot about that needs to have a big game on Friday?

BL: I might be cheating here, but I’ll talk about two guys. One on offense and one on special teams.

Slot receiver Jaylon Redd has been the X factor for this Oregon offense all year. There was a stretch of the season in which he scored eight touchdowns in six games, and his ability to move the chains on slants, screens and handoffs was an integral part of the Ducks’ early success. He is, in my opinion, the most underrated player on the team.

He was out for the game in Tempe with an injury that seemed to have flared up close to game time, and his absence loomed large for an Oregon passing attack that couldn’t move the ball until it was too late. With Redd back in the mix — especially in the absence of freshman receiver Mycah Pittman — the full playbook should be open to offensive coordinator Marcus Arroyo.

The other impact guy that fans may not know is freshman cornerback and return man Mykael Wright. He’s absolutely electric with the ball in his hands and has already brought back two kickoffs for scores this year. If the offense continues to struggle, Wright’s game-changing talent on special teams is going to be that much more crucial. He’ll mix in for about 30 snaps at corner, too, but his real impact will be in the return game.

SM: What is the Oregon defense going to need to do to shut down the Utah offense?

BL: Avoid big plays. The Arizona State game was lost on an 81-yard bomb on 3rd and 16, and Auburn’s Bo Nix hit on a 26-yard score with nine seconds left to beat the Ducks in Arlington.

This Oregon defense has enough sideline-to-sideline speed to be effective when it keeps the ball in front of them, but the secondary is small and has a tendency to get burned for big plays over the top when left in one-on-one coverage. Part of that, of course, comes down to stopping the run and keeping the Utes out of spots where they can take shots downfield, but if Thomas Graham Jr. and Deommodore Lenoir can make plays on the ball in one-on-one situations, the Ducks will have a chance.

SM: What is your score prediction?

If you would’ve asked me this question after Oregon’s 32-point rout of USC in the Coliseum on Nov. 2, I would’ve taken the Ducks in this game by at least two scores. They could’ve beaten any team in the country on that night.

But something has happened since then, and the Ducks suddenly look vulnerable approaching their first Pac-12 Championship Game appearance since 2014. Utah has been absolutely rolling teams, and, as I’m sure Daily Utah Chronicle readers are aware, that team simply doesn’t lose when Huntley and Moss are both healthy.

I think Arroyo scripts 10-15 plays at the start of the game that will get the Ducks out of the gates fast, but the Utah defense will adjust and Oregon will fail to counter.

I’ll go 31-24 Utes. And for a bonus prediction, they become just the third Pac-12 team ever to go to the College Football Playoff.