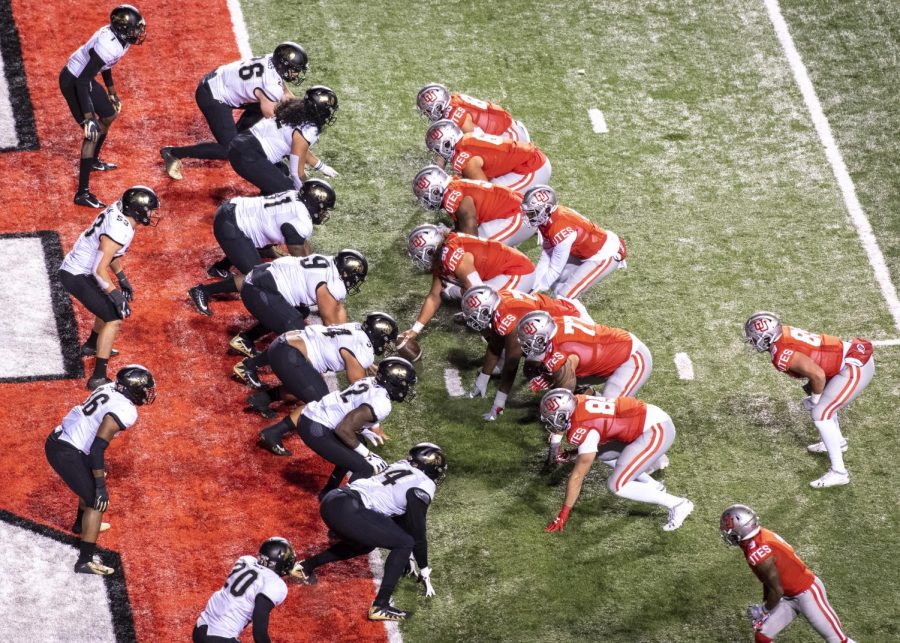 The University of Utah snaps the ball during an NCAA Football game vs. The University of Colorado at Rice Eccles Stadium in Salt Lake City, Utah on Saturday, Nov. 30, 2019. (Photo by Kiffer Creveling | The Daily Utah Chronicle)

In last year’s meeting between the two schools, Utah came out on top 32-25.

Scouting Utah
The Utes are coming off a dominating win over Colorado 45-15. With that, the Utes clinched their second Pac-12 South title. Tyler Huntley went 14-17 for 165 yards and two touchdowns. Zack Moss only rushed for 88 yards on night, but had one touchdown. Brant Kuithe had three touchdowns on the night, two receiving and one rushing. Devin Brumfield also had a touchdown in the win.

The Utah defense continued their powerful campaign only allowing 217 total yards. Devin Lloyd, Bradlee Anae and Mika Tafua all had 1.5 sacks in the game. Lloyd also led the team in tackles with nine. Francis Bernard also had a forced fumble in the game.

Jadon Redding was good from 23 yards out and also on all his PATs.

Scouting Oregon
Oregon is coming off a Civil War win over Oregon State 24-10. While Oregon won the game in the end, Oregon State beat the Ducks in most categories in the game.

In his last season at the helm of Oregon football, Justin Herbert has implemented himself as one of the best quarterbacks in the NCAA. He has thrown for 3,140 yards, going 258-382 on the season. He has thrown 31 touchdowns and five interceptions. Johnny Johnson III has been Herbert’s favorite target this season. Johnson has 49 receptions for 731 yards and six touchdowns.

On the rushing side of things, CJ Verdell leads the team with 963 yards on 162 carries. He has five touchdowns on the year.

Puddles is by far the best bird mascot in the conference.

How to Watch
The game is set to kick off at 6 p.m. MT on ABC. Chris Fowler, Kirk Herbstreit, and Molly McGrath will be on the call. The game will also be broadcast on the home of the Utes ESPN 700 with Bill Riley, Scott Mitchell, and Tom Hacket on the call.