Kim Petras — Electrifying at The Depot 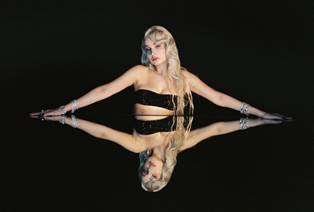 For the second-to-last stop in the United States on her “Clarity Tour,” Kim Petras played for a wildly energetic crowd at The Depot on Dec. 5. With her insane vocal talent that rose above and beyond what her recordings represent and a visually captivating show that few artists could pull off, the concert drew a packed house that roared as soon as she took to the stage.

DJ Alex Chapman opened for Petras. He is known for his “That’s So Gay Mix,” a celebration of this past Pride Month for Billboard, where he included such popular artists in the LGBT community as King Princess, Charli XCX and Petras herself. For the “Clarity” show, he managed to give the audience everything they wanted without being derivative. Every song — from early 2000s bops like “Potential Breakup Song” to recent chart-toppers like “Truth Hurts” and “I Want It All” to even his own mix of Kylie Jenner’s “Rise and Shine” — resonated with the crowd. At his wild mashup of Blueface’s “Thotiana” and Vanessa Carlton’s “A Thousand Miles,” the crowd exploded. Through the infamous piano intro, Chapman grabbed his mic and shouted, “Don’t be embarrassed, Salt Lake, just sing!”

Then, Petras took the stage, starting in a little black dress and big white tutu to sing the titular track “Clarity,” basking in the electricity of it all as the audience continued to cheer. Vocally, Petras’s live performance, dare I say, topped some of her recordings. She sang higher notes in many of her songs, wailing away in difficult passages for over an hour, a feat for any artist, especially at the end of a tour. Visually, the lighting was vibrant and intense. Personally, my favorite moments were when the upstage panels of LEDs spelled out words, especially Petras’ tagline “Woo Ah!,” or represented symbols in her songs — hearts, diamonds or crosses that turned upside-down moving into the Halloween-themed portion of the concert. She was supported on-stage by producer Aaron Joseph, who filled transitions and hyped the crowd.

The climax was Petras’s performance of “Close Your Eyes,” one of the more popular songs from “Turn Off The Light.” Petras had donned her fourth outfit of the night — a red bodysuit featuring an explosion of red glitter over her heart, complete with thigh-high heeled boots, sparkly mesh gloves, and hair in a single braided ponytail that reached her knees — and sang “Death By Sex” on her knees on the rotating platform. The entire stage was lit in a blood-red wash. The spooky dissonance under the dance beats caused the floor to shake, which was only intensified by the jumping of the crowd. In the softer bridge, the lights dimmed to a soft glow as Petras stood center-stage in anticipation of the drop. When it hit, sharp white beams of light from the floor cut through the blaze of spinning crimson lights behind the singer, who was standing above the audience, wind-blown and back-lit, rocking the ending chorus higher and riding the energy of the crowd.

It wasn’t a perfect performance, though every live show has its moments. There was one scary slip off the upstage platform and a short delay during one of the six rapid-fire full outfit transitions. Somehow, it fed Petras’ energy, and made her almost untouchable aura seem so personal. She called on the audience to thank her dresser Lauren, stopped for a drink of water, took a seat on the stairs, and the crowd stayed in the palm of her hand.

One vulnerable moment towards the concert’s close was a cover of “Human” by The Killers. Petras, wearing a merch shirt she later threw into the crowd, and Joseph, armed with an acoustic guitar, sat together on the stairs in a fireside fashion, a moment that felt removed from the energy of the rest of the concert but one that was touching nonetheless. Right after, Petras picked right back up with the second track from the “Clarity” album, “Icy.”

Arguably, the concert ended stronger than it began. Her final song, before returning for a colorful and energetic encore, was “Can’t Do Better,” a single Petras released before the successes of her two full projects. Clearly a favorite, the crowd sang louder than it had before, joining in to close the night on a call-and-response chorus of Petras’ quintessential “Woo Ah!” The entire show was wildly energetic and wonderfully executed — as Petras expressed to those in the crowd, it could have been “the best night of your life.”