Barron: McAdams’s Choosing of Country Over Self Is an Act of Patriotism 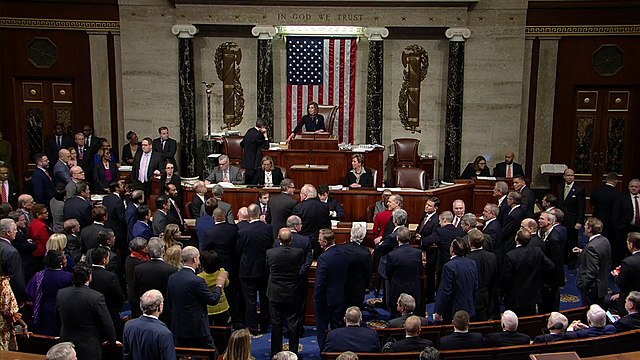 Earlier this month, I received an email with the subject line “A Message from Congressman Ben McAdams.” As a resident of Utah’s 4th Congressional District, I had sent Congressman McAdams a message over the weekend voicing my concerns about the presidential abuse of power uncovered during the Ukraine scandal investigation and urging him to vote for impeachment. His reply was brief — he outlined the charges against the President, his previous vote to make the proceedings public and Congress’ responsibility to hold the executive branch accountable for unethical actions. He ended his message simply by saying, “I will take [the Judiciary Committee’s report] and review it carefully and deliberately and then make a decision that is in the best interest of the country and fulfills the oath I took to uphold the Constitution.”

Exactly a week later, Congressman McAdams held a press conference during which he announced his intentions to vote for impeachment. McAdams is the lone Utah representative supporting the impeachment proceedings, despite his political vulnerability and his awareness that the Senate is unlikely to hold a fair trial. McAdams explained his decision further in an op-ed published in the Salt Lake Tribune. “What the president did was wrong,” McAdams wrote. “His actions warrant accountability.” By choosing to put the United States before his own personal political ambitions, McAdams demonstrates what patriotism looks like in an era marked by partisan politics and self-equivocation.

A recent Washington Post-ABC News poll found that Americans are split along partisan lines over impeachment. 85% of Democrats believe Congress should impeach and remove President Trump from office while 86% of Republicans believe Congress should not impeach and remove the president. This partisanship has been reflected in Congress. Republican representatives have disrupted closed-door sessions, have attacked the character of witnesses like Alexander Vindman and have spread debunked conspiracy theories meant to exonerate the president. On the other side of the aisle, House Democrats are guilty of using the impeachment vote to draw party lines. After Representative Jeff Van Drew switched parties in coordination with announcing his intentions to vote no on impeachment, the Washington Post noted, “Impeaching Trump is a litmus test that defines which party you belong to.”

Ben McAdams defeated incumbent Mia Love in the 2018 midterms by only 694 votes to become Utah’s lone Democratic representative. While he was viewed by many UT-04 voters as “too liberal” for the district, he was also deemed “too conservative” for the party by many of his Democrat peers in D.C. Understandably, it would have been easy for McAdams to buck the party that has often alienated him to appeal to the more conservative voters in his district. Indeed, State Senator Dan Hemmert told reporters prior to McAdams’ announcement that “If [McAdams] votes yes on impeachment, I think he becomes much more vulnerable because then he motivates that far-right crowd.” Cognizant of career consequences, McAdams’ choice wasn’t in an effort to follow his party but his conscience.

Prior to the impeachment vote, Senate Majority Leader Mitch McConnell practically guaranteed President Trump acquittal in the Senate. During a Fox News interview, McConnell declared there was “zero chance” that Trump would be removed from office and guaranteed “total coordination” with the White House defense team if the House approved articles of impeachment. While it may seem unwise for McAdams to risk his seat for an impeachment process unlikely to remove the president, research shows that symbolic gestures matter as social norms dictate actions. Essentially, the difference between what a person wants to do and what they actually do is dependent on what they think their peers expect them to do and how these peers will likely react to their actions. As McAdams noted during his announcement, turning a blind eye to improper presidential conduct now condones future leaders’ unethical actions.

On Dec. 18, 2019, President Donald Trump was impeached for abuse of power and obstruction of justice. McAdams, along with 27 other vulnerable Democrat representatives, voted in favor of the articles despite dire warnings about their electability in 2020. As Elissa Slotkin, a freshman representative from Michigan, told reporters, “If this was a political calculation … I wouldn’t be voting ‘yes’ on articles.” Campaign strategy, however, should never overshadow patriotism. These House leaders have risked their political career to uphold their oath to “support the Constitution of the United States” despite the partisanship that will likely prevent total presidential accountability.