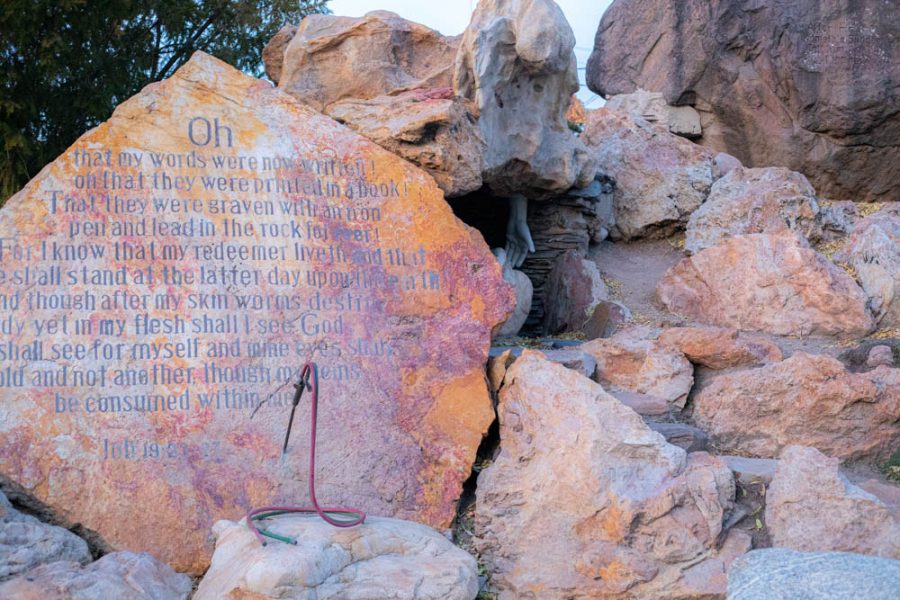 Gilgal Sculpture Garden is nestled in a quiet, downtown neighborhood. A local treasure, this garden is unique to Salt Lake City. Unlike a traditional garden, this one is home to many eccentric sculptures. Most, if not all, of the sculptures have been inspired by stories and scriptures from the Book of Mormon and the Bible.

Located on 749 East and 500 South, this garden is an escape from the heart of bustling downtown. Since it is hidden behind the surrounding neighborhoods and businesses, most Salt Lake residents aren’t aware of it. It doesn’t draw any particular attention to itself. Its only noteworthy feature is the small sign that reads “Gilgal.” Gilgal is a biblical word, referring to a “sacred, stone circle.” It was unquestionably a reference to various sites mentioned throughout the Old Testament in the Bible. Gilgal seems considerably fitting as the park is, in essence, one giant circle of stone sculptures.

The expressive statues are often abstract, some of them even considered creepy or fanatical. One of the more famous sculptures is a 52-ton stone carving of Joseph Smith’s head on a Sphinx’s body. These sculptures stir varying feelings in park attendants. One thing is for sure — the statues are quite impressive.

Some lesser-known statues include a modern wire-frame figure of Moroni, similar to the one that sits atop the Salt Lake City temple, and a rock archway consisting of a large center boulder seemingly held in place by other rocks meant to represent the keys to the priesthood, the LDS term for the power and authority to act in God’s name.

However, not all of the sculptures are religious. There’s a shrine to the creator’s wife, and another to the creator himself, as well as a waterfall that’s meant to celebrate Utah’s natural beauty. Regardless of whether or not you practice the LDS faith, you can’t help but admire the passion behind the park. Along with this, there is the unexpected tranquility of the area. Flowerbeds line polished rock pathways. The stone sculptures scattered around the area have held their condition, even through years of weathering. The various carved LDS scriptures and statues are sculpted with incredible detail.

Such an impressive and well-hidden park elicits the question of where this garden came from.

I took a stroll around the park with Judi Short, President of Friends of Gigal Garden. Judi herself is retired and graduated from the University of Utah in 1992 with an executive MPA. Using her background in administration to oversee the garden, she has helped the upkeep of the garden for the past few years. “I’m retired now, so this is only a part-time thing. We come here every Tuesday morning in the summer and spring to help maintain the park.”

When asked if Short was religious, given the nature of the park, she said, “No, actually I do believe in God, and in an afterlife. But I’m not religious. Most of the people a part of the board aren’t, either. Except for one.” It seemed a little odd to have a place so deeply rooted in LDS culture to have an administrative team that’s mostly non-religious. Short said, “After working on the park for so many years, I’ve gained a deep love for the garden.”

Maybe there’s more to this park than weird sculptures. Perhaps this place isn’t just a site of fanaticism, but a real gem for Salt Lake City. This was a tranquil place, full of beautiful flowers, birdhouses and well-done sculptures. It’s a safe place for all to gather. “We’ve actually just had a wedding here, the granddaughter of Child [creator of the park]. Another couple just made a request, they want to get married under the stone-arch,”  Short said.

The Origin
In 1943, Thomas Battersby Child Jr. retired. He spent most of his time creating sculptures in his own backyard based on his enlightening time as a member and bishop of the LDS church. Child was a devout member as well as a retired stonemason. He brought in the help of his son-in-law, Bryant Higgs, and his long-time friend and neighbor, a sculptor named Maurice Edmund Brooks, for a new project he had envisioned. In the coming years, they would etch out roughly 12 stone sculptures and over 70 scriptures and writings carved into rocks around the park. He worked on his personal backyard sculptures for years up to his death in 1963. Some of the projects he never finished still lay as stones in the garden, exactly where he left them.

This place was a sanctuary, even as a backyard in Child’s home. “He would do tours, and he would play music for people. He had his wife cook food, and he would even have scripture readings back here sometimes,” Short said.


The Transformation
The people who knew of the garden’s existence long after Child’s death dubbed it “the secret garden” and “stoner park.” The site became neglected for many years, an abandoned backyard turned teenage sanctuary. The glory of the hidden gem diminished when the park started to be vandalized — many of the sculptures and carvings were graffitied, crushed or broken. It wasn’t until 1998 when the Fetzer family, who owned the property, decided to give it up. They sold it to a group that formed solely with the intention to preserve the property named “Friends of the Gilgal Garden.” This was a coalition of neighborhood admirers who wanted to save the sculpture garden from becoming condominiums. The Friends were formed when that offer happened. “The community stood up and said, no, this place is too special,'” Short said. The non-profit organization raised a large sum of money from the LDS church, City Council and local admirers for restoration and upkeep. Short said, “The upkeep, even in recent years, is not cheap. We’ve spent a lot on the new sprinkler system alone.” Short went onto explain the erosion of the stone structures over the years, and how expensive and time-consuming it is to restore missing pieces, grout that holds the stone together and more.


This same organization has turned this backyard into a public park, even winning awards for their upkeep of the place. Walking through the site, I could see the cracks and various stains on the statues from the years of neglect. It was an oddly secular touch, impressive that only a few people made all these sculptures, and how many people – religious or not – cared about the garden. Elements like stone are considerably harder to destroy, and in the same thread, the messages engraved on them are much harder to lose.

The park is incredible this time of year, blooming with orange and red as the leaves prepare to fall. The flowers and gardens surrounding the stone structures will be cut down to re-grow next spring. Families take strolls around the garden, people bring their dogs on leashes for walks. This is a community of nature lovers, a garden meant for all.

Next time you find yourself downtown, visit the garden if you need to relax. Gilgal Gardens is an eccentric, beautiful hidden gem right here in downtown Salt Lake.