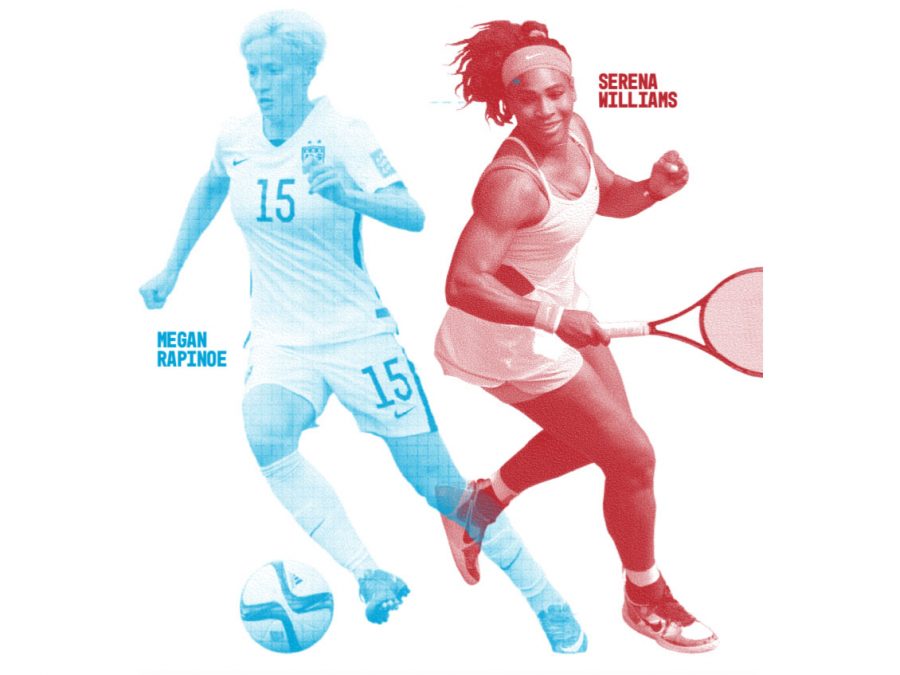 Now that the new year has come and gone, the Sports Desk sat down and came up with who we think are the most successful and influential female athletes of the decade.

Casey’s Top Three
The past 10 years have been filled with incredible female athletes across all sports and at all levels of play. It is hard to identify who the most influential of these women are, but these are my top three. First up is Danica Patrick. In her prime, Patrick was a household name as she made huge strides in the male-dominated world of racing. She was the first woman to win an IndyCar series, and although she is not currently active in the sport, she has been a huge role model for girls everywhere.

One of the newer names on my list is Elena Delle Donne, who is a basketball player in the WNBA. She plays with the Washington Mystics and she most recently won her second MVP award in 2019. She has been named to six all-star teams and was the first female member of the 50-40-90 club. As an openly gay athlete, she has joined the growing ranks of out athletes, and been an advocate for the LGBTQ+ community.

Lastly, I want to bring back a name that we have not heard in a while: Ronda Rousey. In 2012, Rousey was the first woman to sign with the UFC, and from there, she built up quite a legacy in the sport. In 2018, she was inducted into the UFC Hall of Fame. She has been a huge voice for female athletes during her career and she is a name that will be remembered for a long time.

Sammy’s Top Three
No one will argue with you if you say that Serena Williams is one of the best tennis players of all time. She has more Grand Slam titles than any other tennis player, male or female. When staring in the face of adversity, she ended up on top. Even after she took time off for injury and then to start her family, you could never tell that she left the sport. Williams has become a role model for not only female tennis players, but for girls all over the world.

Megan Rapinoe became not only the face of the U.S. Women’s National Team as a whole but also the face of the equal pay movement for the USWNT. The 2019 Ballon d’Or Feminin winner had a fantastic decade with two World Cup wins, two NWSL Shield wins, an Olympic gold medal and numerous other awards. Rapinoe and the rest of the USWNT will go for another gold medal this summer in Tokyo.

Simone Biles has solidified her place as one of the best gymnasts of all time. She is a five-time world all-around champion, five-time world floor champion and is the most decorated gymnast in history. During the 2016 Olympics, she won the gold medal in the all-around category as well as in both the vault and floor. She is a bronze medalist in the beam. She looks to continue her decade of dominance in this summer’s Olympics.

Mallory’s Top Three
Picking just three female athletes from this decade was the hardest part of writing this because there were so many incredible women in sports these past 10 years. Lexi Thompson isn’t a mainstream name, but she has made an impact in the sports world. Thompson went pro in golf in 2010 at age 15. She is the youngest golfer to ever qualify for the U.S. Women’s Open at age 12 and has since then gained 14 professional wins. She currently plays in the LPGA, which she joined in 2012 at age 17 and has tabbed 11 wins in the tour.

Kerri Walsh Jennings is a name all Americans are familiar with after watching her play beach volleyball for continuous summers where she gained three Olympic gold medals and one bronze.

Aly Raisman also makes this list, as she was a captain of both the 2012 and 2016 gymnastics teams, where she gained three gold medals, two silver and one bronze. Raisman was a victim of sexual abuse who has turned that experience into advocacy and awareness for all the young girls looking up to her. Overall, all these women have done amazing things for sports and female athletes all over the world. Here’s to the next decade of strong women in athletics!

Cole’s Top Three
When you think of ice hockey, what may come to mind is missing teeth, fistfights and Canada. For Kendall Coyne, captain of the United States Women’s National Team, those stereotypes are untrue. Her career began in 2011, and since then, Coyne has played racked up quite the impressive resume. During the 2019 NHL All-Star Break, Coyne participated in the speed challenge because of her impressive skills and abilities. She was the first woman to participate in the NHL skills challenge and set a time of 14.326 seconds, which was comparable to the male winning time of 13.378 seconds. Coyne is a strong woman and a perfect example of breaking barriers and achieving on the highest possible stage.

Losing in a penalty shootout in the World Cup Final is never easy, but USA goalkeeper Hope Solo experienced this back in the summer of 2011 while she was a member of the U.S. Women’s National Team. Solo did not let that be the defining moment in her career, and she has gone on to still be involved in the sport by working as an analyst during the 2019 World Cup. Solo is the perfect example of not allowing a failure to define you.

To win an Olympic gold medal is quite an achievement. To win three Olympic gold medals in a row over eight years is legendary. In addition to doing this, Misty May-Treanor also won three World Championships in 2003, 2005 and 2007. With all of these achievements, May-Treanor and her partner, Kerri Jennings were named the greatest beach volleyball team of all time. Off of the field, May-Treanor is giving back to her community by serving on the President’s Council on Sports, Fitness, and Nutrition. Treanor is an example that no matter your circumstances, anybody can be successful in whatever profession they choose.

Brayden’s Top Three
Alex Morgan has been the face of the U.S. Women’s National Team for three World Cups and has been considered the greatest player in the world for almost 10 years. Morgan has made headlines for being vocal about the payment of female athletes and an advocate for women’s rights. She has been featured in over one hundred games for the USWNT and has won multiple world cups, Olympic medals, and has also won female athlete of the year. She was the first female to ever feature on the cover of the video game “FIFA.”

Shawn Johnson was a name that became famous in the 2008 Olympics. Johnson would compete in all four events in the Olympics team competition, finishing with the silver medal in both the team competition and the all-around. She would also receive another silver medal alongside a gold and bronze medal during the Olympic games. Johnson not only showcased her skill in gymnastics but also on the hit television show “So You Think You Can Dance.” She would show off her moves and take home the championship in 2009. Johnson competed in the All-Star edition of the show and come in a close second place in 2012.

Lindsey Vonn can be found on the slopes racing down mountains and trying to top world record speeds. Vonn is one of only two female skiers to win four World Cup championships. She also would be the main female skier showcased for the United States in multiple Olympics. Vonn also holds the second-highest super ranking in both men’s and women’s skiing, and she is known as one of the greatest skiers of all time both nationally and internationally.