Torres’ Teamwork and Kindness: Lifting Up the Women’s Basketball Team 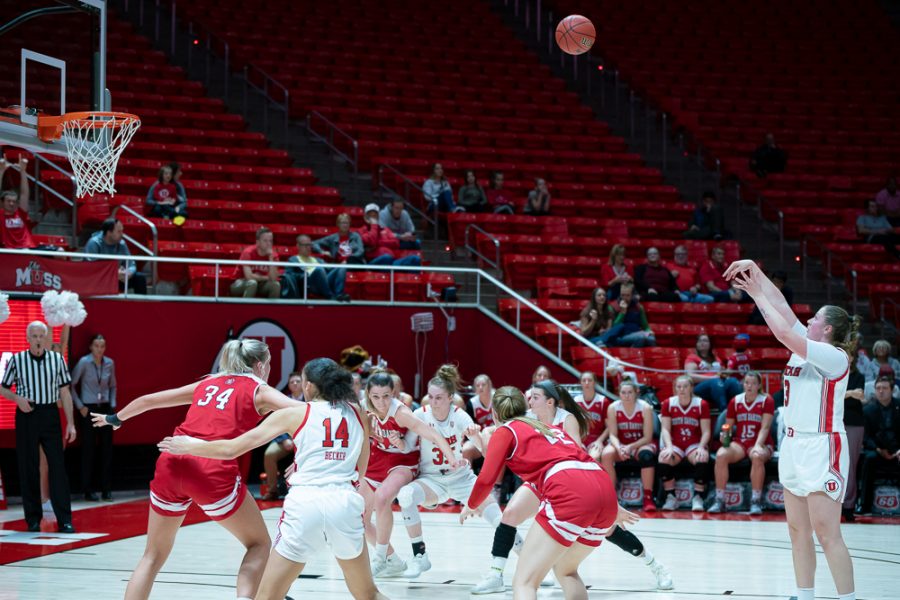 Basketball has always been a part of University of Utah women’s basketball player Andrea Torres’ life. Growing up in Canada, she played soccer and flag football, but she always found her place was on the hardwood, watching the ball go in the net.

“Basketball was always a part of my family,” Torres said. “My grandfather played for his national team in Chile. When my brother started, I just wanted to follow my brother and I just fell in love right away.”

Torres is writing her own story as a basketball player at Utah. As a sophomore and in her second season with the Utes, she is already making an impact on the team. In 24 minutes per game, she is averaging 5.5 points, 5.5 rebounds and 1.5 assists.

“I worked out pretty much every day with my trainers,” Torres said, “And that’s when I started to do really good.”

Teammates Maurane Corbin and Julie Brosseau both played basketball with Torres growing up in Canada, and they have seen her progress both on and off the court.

“I love playing with Andy,” Corbin said in an email interview. “I feel like we have this connection and we just know each other so well. It is reassuring in a way when we are on the court at the same time, and it is easy to find each other. Off the court, I think we also understand each other very well, and can count on one other for anything. What I cherish the most about basketball is the amazing relationships I created through the years, and my friendship with Andy is one of those that I will keep for a lifetime.”

Teammates love playing with her. She has progressed immensely in her time playing basketball, and Torres still has the potential to be even better during her career at Utah. With still multiple seasons left to play, it’s clear Torres is just getting started.

“The Pac-12 Conference is a really, really good conference. When I got recruited by them I was just like ‘wow’ and fell in love with it already. And then when I visited this city, it was amazing. The mountains were really different and the team and the coaches were really awesome.”

The U is a great place to play and the opportunity was too good to pass up. It’s a bit of a change coming from Canada, but Torres is getting used to it.

“The environment is really different than back home, which I really like. It’s hot, it’s cold, it’s kind of all the seasons. I also live with my best friend.”

Choosing Utah also offered the opportunity to play in the biggest rivalry game we have: the one against BYU. Last month, the Utes found themselves in a close one down in Provo. Down two points with just 1:33 left in overtime, Torres nailed a 3-pointer to put the Utes up by one. They never gave the lead back and they went on to pull off a huge victory over our rival down south.

“Andy has the power of lifting everyone up with her personality,” Corbin wrote. “She is always smiling and encouraging. She trusts her teammates and is the first one to bring them up when something goes wrong. She is an AMAZING basketball player who can score at all three levels. However, she is never selfish or self-centered. She cares about everyone around her and wants to make sure that everyone is happy.”

Torres isn’t quite sure what the future holds for her after college, but she has a few ideas. “I for sure want to work with kids. I don’t know what exactly, maybe social work or maybe a basketball coach.”

What she does know, though, is what she wants to be able to do on the court for the Utes. “I want to go to the NCAA tournament,” Torres said.

She has the ability to help her team get there. As a sophomore, she is still learning about the game from her teammates and coaches, but it won’t be long before she is the one doing the teaching.

“She is aware of her role on the team, and takes it very seriously,” Corbin wrote. “She WANTS to work hard every day to get better and contribute in the best ways she can, and that is what I admire the most about her. She has enormous potential and her work ethic can make her have an amazing basketball career.”