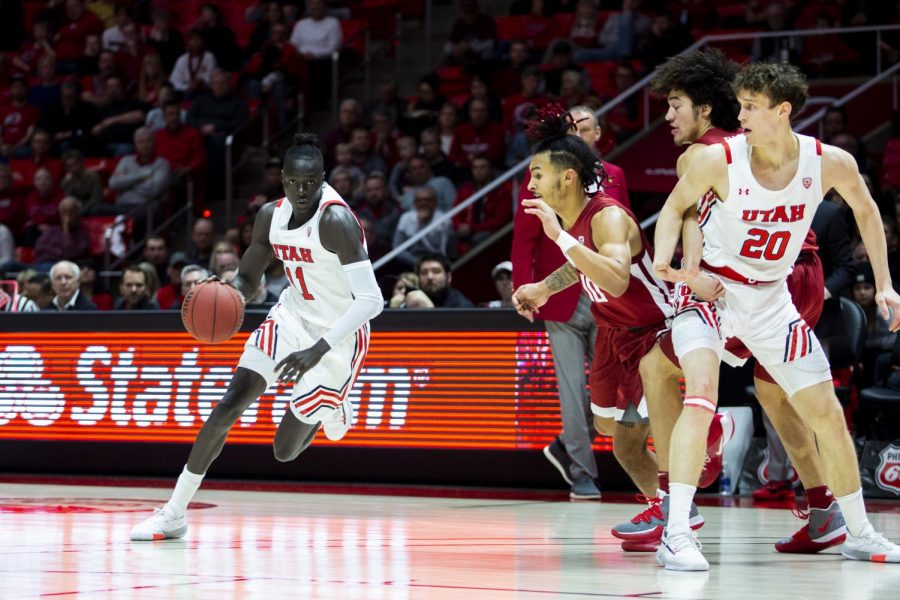 The University of Utah Runnin’ Utes travelled to Los Angeles to take on the USC Trojans and UCLA Bruins this past week. Utah would don new warmup gear with the numbers 8 and 24 in honor of the late Kobe Bryant for both games. This was the first and second games for each of the schools since Bryant’s passing last Sunday.

Utah vs. USC
Utah played well through the first 30 minutes of the game, only allowing USC to take the lead with seven minutes to play. The Trojans would eventually take the win on their home floor by a score of 52-56.

The Utes started the game on a high, taking an early 14-4 lead off the back of Rylan Jones’ and Jaxon Brenchley’s back-to-back 3-pointers. USC would make a few buckets in a row to come within four, but the Utes would hold them off for the remainder of the half, heading into the locker room ahead 29-23.

Neither team played outstandingly in the second half. Utah’s defense would eventually allow the Trojans to go on a 10-0 run, which would give USC an opening to take their first lead of the game. The Utes and Trojans traded punches through the final four minutes of play before USC’s Onyeka Okongwu blocked Timmy Allen with six seconds remaining to seal the victory.

Allen’s 13 points would lead the Utes in scoring while tying both Battin and Jones for team leads with 9 rebounds and 3 assists, respectively.

Utah vs. UCLA
Game two on the week was a back-and-forth battle through the first few minutes of the game. UCLA would go on a 10-0 run before the Utes would start to chip away with just over two minutes in the first half. Down by seven, the Utes were showing spurts of great play, but UCLA was difficult to handle, as they stormed ahead to lead by 11 at the half.

Halftime adjustments showed promise, as Jones and Battin combined for three 3-pointers to help claw within five. That’s about as close as the Utes would get the remainder of the afternoon, though, as UCLA would go on a 15-2 run to put the game out of reach.

“The first half there sure was a lid on the rim. I thought that we missed a bunch of open shots and you witnessed it,” said head coach Larry Krystkowiak after the game. He emphasized that at halftime, the Utes were only 1-for-12 from the 3-point line.

Krystkowiak said that during the second half, “We hit three 3s fairly early on and cut it to a couple-possession game and just couldn’t sustain it.” What held the Utes back? “I thought the free-throw line was a big key, us only getting there five times,” Krystkowiak said. “We knew they were an elite team at the free throw line.” He said rebounding was a “wash” and that a high turnover rate, especially at the beginning of the game, ultimately hurt the team.

Ultimately, Krystkowiak said the Utes got bested by some tough opponents. “They put a lot of pressure on you with their size,” he said. “The margin of error I think is too slim for a team like this to throw the ball away.”

Next Up for the Utes
The Utes will be back at home next week to take on the northern California Pac-12 squads. Up first will be a matchup against Stanford on Thursday at 8 p.m. Game two will be against the Cal Golden Bears which will take place at 6 p.m. Both games will be televised on Pac-12 Networks and radio broadcast on ESPN 700 by Bill Riley and Jimmy Soto.