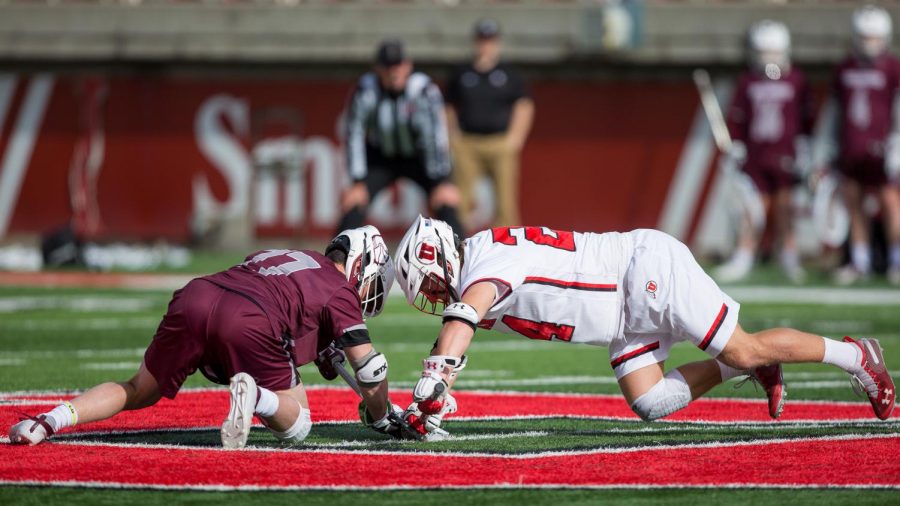 Excitement is in the air. The University of Utah Lacrosse team opened their 2020 season with a convincing victory over Belleramine last Saturday in Rice-Eccles Stadium.

The outcome of the game never seemed in question. With a 10-4 lead going into the half, the Utes held a commanding lead over the Knights all throughout the early stages of the match. The score tightened at the beginning of the third quarter, as the Utes surrendered three goals, cutting their lead to three.

However, the Utes were able to respond promptly. In just 34 seconds, Reuben Santana and Josh Stout scored back-to-back goals, reorienting the Utes to an eventual nine-score victory. Utah was led by senior Jimmy Perkins, who had four goals on the Knights.

After the match, head coach Brian Holman appeared pleased in a statement to Utah Athletics.

“I thought the team performed well. It’s good to get a win — what a difference a year makes. This has been a really good team to coach. They are engaged and energetic. I think we played our style of lacrosse, which is something that we’re proud of – more in transition and pushing the ball. For the most part, they executed the details that we asked them to execute and played with a lot of passion.”

With the Utes coming out of the gate, fans and critics alike are interested to see how the Utes fair against Lehigh University in their second match of the season. Several key factors will need to be in place for the Utes to jump to a 2-0 start.

As with any sport, the offensive production must be in place for the Utes. Last game, Utah jumped on a scorching offensive start and rode that momentum through all four quarters. Players such as Perkins, Santana and Stout must replicate their fast-striking offense.

Secondly, Utah must create a more concrete defensive strategy. Although victorious, Utah did allow Bellarmine to close the gap at the beginning of the third quarter, while collectively giving up 10 goals. Goalie Liam Donnelly must also come prepared. With a total of nine saves last game, Donnelly must have another excellent performance.

As the Utes travel to Pennsylvania, the team carries a significant amount of momentum. Looking for their third victory in a row (including the final game of last season), the young Utah team is hoping for a much stronger showing than their inaugural year.

This game will take place on Saturday, Feb. 8 at 11 a.m. in Bethlehem, Pennsylvania.