Clutch Beam Performance as No. 3 Utah Gymnastics Take Down No. 12 Golden Bears 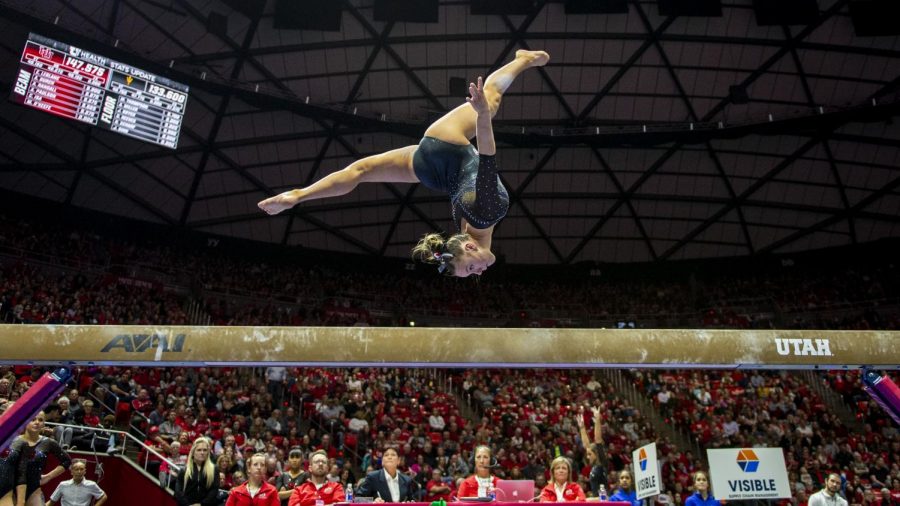 In seasons past, the beam has seemed to be the Achilles’ heel for the No. 3 University of Utah Red Rocks gymnastics team. This year’s team is different.

The freshman class came up clutch for the Red Rocks on multiple events. Maile O’Keefe posted new career highs on the beam, bars and floor. O’Keefe was the lone Red Rock to compete in the all-around category, and while she did not win the title, she did set a new career high score of 39.400.

Abby Paulson made her season debut on the bars and posted a 9.850. She also set a new career high score from the anchor spot of the beam lineup with a 9.950.

Fans also got their first look at what Jillian Hoffman could do for the Red Rocks. After competing as an exhibition for a few meets this season, Hoffman competed on the floor and posted a 9.850 when the Red Rocks desperately needed it.

While her floor routine was the score that the Red Rocks dropped, senior Kim Tessen posted a career high score of 9.975 on the bars. She also scored a 9.825 on the vault. Junior Sydney Soloski posted a 9.925 on the floor to help give the Red Rocks a small edge heading into the final rotation.

While the Red Rocks thrived on three of the four events, the vault proves to be the event where the team needs to focus attention to become a more well-rounded team.

“Just an incredible effort on beam to win the meet,” said head coach Tom Farden to Utah Athletics. “Our young team handled some last minute lineup changes on different events like a veteran team would. They showed tremendous resiliency on the road and it paid dividends, in the end, to win at Cal.”

Alexia Burch won the vault with her score of 9.900. Tessen won the bars with her 9.975. There was a three-way tie on the beam with Paulson, O’Keefe and Adrienne Randall all posting 9.950. Soloski tied with Cal gymnast Kyana George to win the floor with scores of 9.975. George also won the all-around competition with her score of 39.550.

With this win, the Red Rocks move to 7-0 overall and 2-0 in conference competition. The Red Rocks also avenge the loss they suffered in Berkeley in 2018 197.450-197.500. The Red Rocks end their first two-meet road trip undefeated. They will be back home next Saturday, Feb. 15, to take on Oregon State. After that home meet, the team will hit the road for two more meets to face foe UCLA and Washington.