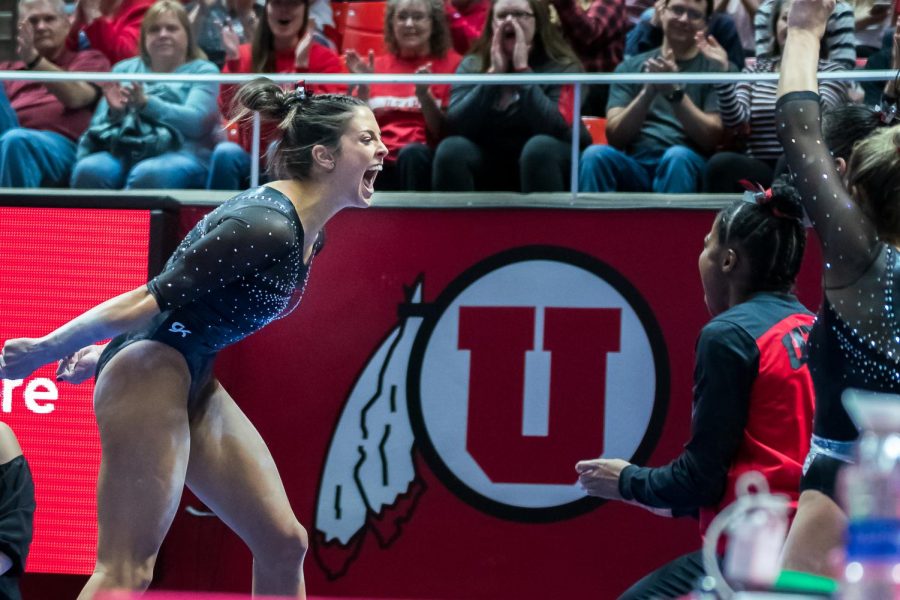 University of Utah women's gymnastics sophomore Adrienne Randall is greeted by her team after her performance on the balance beam in a dual meet vs. Arizona State University at the Jon M. Huntsman Center in Salt Lake City on Friday, Jan. 24, 2020. (Photo by Abu Asib | The Daily Utah Chronicle)

The No. 3 University of Utah Red Rocks gymnastics team will face their biggest test up to this point of the season as they head to Berkeley to take on No. 12 Cal. When the two teams met in Salt Lake City last season, Utah came out on top 197.150-196.225.

At the individual level, Kim Tessen is ranked No. 9 on the bars and No. 13 on the vault. Cristal Isa is the other ranked Red Rock, coming in at No. 21 on the beam.

Scouting No. 12 Cal
Record: (6-4 Overall, 1-2 Pac-12)
Last meet: Loss vs. Arizona State, 196.300-196.250.
Cal is currently on a two-meet losing streak, dropping meets against Washington and Arizona State. The Golden Bears are the No. 6 team in the nation on the bars. The team is led by Kyana George who ranks No. 5 on the vault and No. 21 on the beam. She also has scored the highest of any gymnast on the team in the all-around with a 39.575. The other all-arounds for the Bears include Maya Bordas and Nevaeh DeSouza. The team scored their highest score of the season in their Pac-12 opener over Stanford (197.325).

How to Watch
This week’s meet is set to start at 1:30 p.m. It will be broadcast on the Pac-12 Network. Jim Watson will do the play-by-play, while Amanda Borden will be on the call as the color analyst.

Up Next for the Red Rocks
After their trip to Berkeley, the team will be home to host Oregon State on Feb. 15. This is the lone home meet for the month of February. After that meet, the Red Rocks will hit the road again for two more meets against Top 25 opponents in UCLA and Washington.