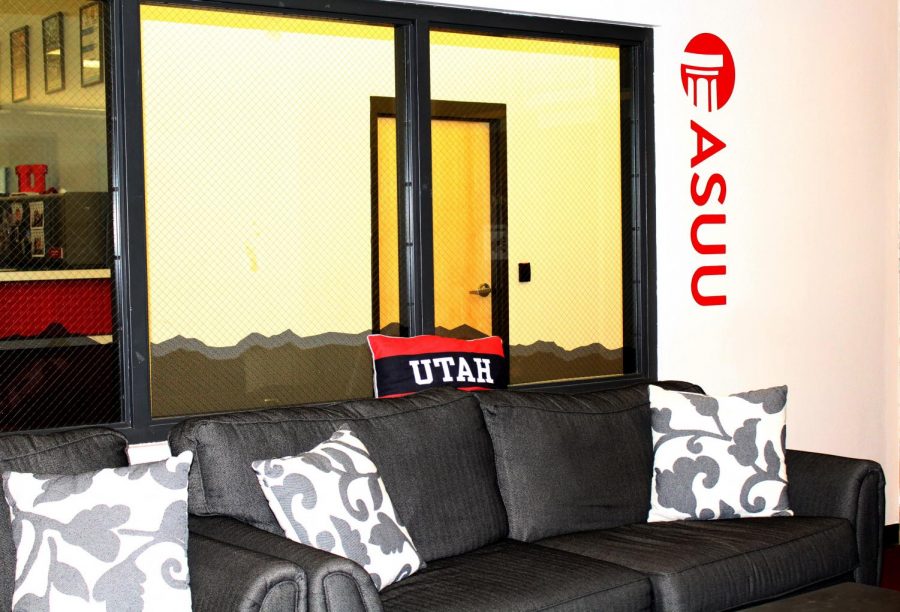 Couches for the students at ASUU office at the University of Utah in Salt Lake City on Feb. 6, 2020.(Photo by Marifel Holmquist | Daily Utah Chronicle)

Update: The Madson ticket has been disqualified from this election cycle for failing to complete “the orientation for all Executive candidates” and “the mandatory diversity education” requirements by their respective deadlines as outlined in the Executive 2019-2020 Candidate Packet.

As the university prepares for a new school year, the Associated Students of the University of Utah, the student government at the University of Utah, prepares for upcoming elections and a new administration. For the first time in the last three elections, more than one candidate is running for president. As Anna Barnes’s presidency comes to an end, there are four new tickets vying for the position.

In email interviews to the Chronicle, the candidates discussed their positions on key issues that affect the student body.

The U is a dry campus and each candidate has ideas on how the policy can be improved or revised.

Hardenbrook said the dry campus is a “pretty neutral topic” for her ticket, but if the U remains a dry campus, they want to continue toward a harm-reduction policy that “does not punish students” for calling for help in cases of alcohol poisoning.

Nasser thinks it is important to educate students on how to drink responsibly and develop safe drinking habits. “Simply banning it does not necessarily solve a problem,” he said.

“I personally like the practice, but overall my focus is ensuring a positive and safe experience for students on campus. I think that the policy should be conducive to that, and so long as it proves to do so, I am in support,” Kum said.

Madson addressed the part of the policy extending to students on internships or trips with the U who still have to adhere to dry campus standards. “I think that this is a discussion that we can have among ourselves as students. If we want a change, it will become one of the many priorities of my administration to achieve this goal safely,” he said.

Of the “simply tobacco-free” campus policy, Nasser believes it was “a great step” toward public health and the judgment-free approach should be used in other campus culture changes.

Kum is also in favor of the policy and said it promotes health and safety.

The Hardenbrook ticket has two issues with the current policies: the majority of students affected have financial concerns or are international students, and the law itself has no enforcement attached. “We think that also suggests to us, if we genuinely want to end smoking on campus, there is a need for a comprehensive, long-term solution which includes students as major stakeholders and increasing resources across campus to support students in leading healthy lifestyles,” she said.

Madson said while he believes it is a crucial policy, students still smoke on campus on a daily basis. He said he is open to allow students to vape outside of buildings as an alternative.

Safety as a whole on campus has been a large concern for students and student groups, with organizations like Unsafe.U forming in response to Lauren McCluskey’s murder and instances of hate speech growing.

Nasser said he thinks Unsafe.U  “shed light on serious issues,” but transparency and collaboration are key to ensuring widespread, long-term solutions are created. Additionally, he believes hate speech is a problem on campus and the solution is developing unity and community among students in order to make sure everyone is “respected as a human being.”

In regards to Unsafe.U, Kum said it’s important to work together with as many people as possible, and that “we can’t afford to be creating enemies,” only working toward solutions and trust. Kum also said hate speech is an issue on campus and “condemnation is [the] key” to stopping it. Refusing to give hate speech a platform “even when we are condemning it” and making students feel safe after an incident is crucial.

Hardenbrook plans to adopt Unsafe.U’s “entire slate of demands” and integrate additional constituents. “We have already begun meeting with Chief Safety Officer Marlon Lynch about the next steps of implementing these demands,” she said. Addressing hate speech on campus, Hardenbrook holds that racial slurs and posters from white supremacy organizations on campus are criminal in nature. While she said she doesn’t think ASUU can stop them completely, she hopes to build a community that is inclusive and equitable. They plan to send out yearly climate surveys and hold forums regularly to address these issues.

In response to Unsafe.U, Madson said he plans on “establishing a relationship with UPD and creating a system of awareness and advocacy.” This includes creating a Campus Safety Board within ASUU, and one of his running mates, Delaney Horchover, would implement a “Remembering U Week,” where they would discuss how to learn from previous mistakes. Madson said he faced a lot of racism growing up and he doesn’t want anyone to face those same experiences. “Any student who is proven to be intentionally hurtful to any group of people based on their race, religion, sexual orientation, gender, nationality, or age will get the fiercest criticism from my administration,” he said.

The U is also building new dorm buildings and decreasing parking, transitioning out of a commuter campus status.

Kum said there are benefits to being a residential campus, but the transition must be deliberate and take into consideration all possible consequences. “Are we going to improve upon public transportation so that students are not limited to campus? Are we going to make housing cheaper if there’s now going to be more options for it?” he said.

Nasser wants to prepare student government for the transition, while “not leaving our current commuter students behind.” He suggests making campus parking free at night or having more student group events on campus.

While he said he understands the move, Madson thinks the university is taking the wrong approach. He said the U is home to many non-traditional students, and if they want more students on campus, they need to better balance the cost and benefits.

Hardenbrook sees two considerations for a transition like this: culture and parking/transit. She said the U will have to foster a true community environment for this to work and must make student organizations and government accessible as a part of it. She also said while her ticket “would love to get rid of cars on campus” from a sustainability perspective, they know commuters make up a substantial part of the student body and depend on vehicles and public transit.

To learn more about the tickets and their respective platforms, join us on Tuesday, Feb. 18 for a primary debate hosted by the Daily Utah Chronicle and ASUU. The debate will take place in the A. Ray Olpin Union Theater from 4-5:30 p.m. 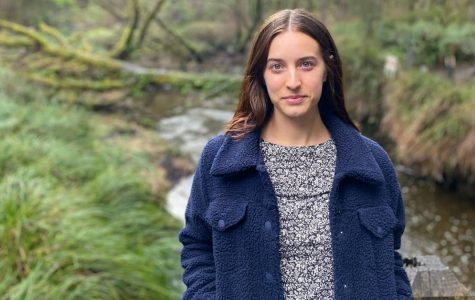 Rebecca Hardenbrook is a Ph.D. student in mathematics, and is running alongside Devon Cantwell and Carlos Craig. Hardenbrook has spent the last six years at the U and said she has learned about how issues for undergraduate and graduate students differ and intersect. “Although the student experience is different in many ways between undergrads and grads, a lot of their biggest concerns — safe... 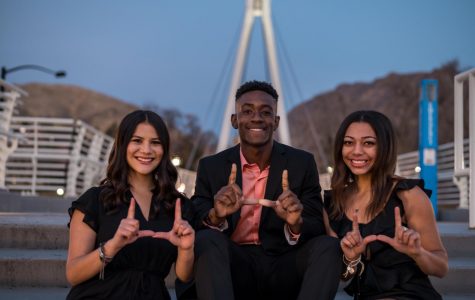 Ephraim Kum, a junior studying political science, has chosen Ayana Amaechi and Michelle Valdes for his VPs.   “I believe that we are people first before we are students, and we must make it a priority to give students a chance to be people first, and then give them the opportunity to be successful students and more,” Kum said in an email interview.  Kum is running on an access platf... 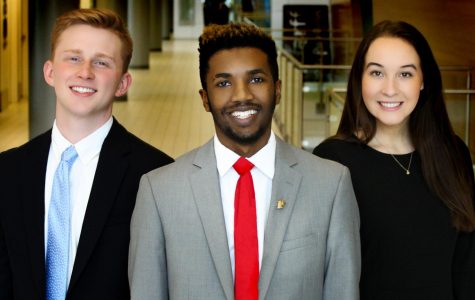 Update: The Madson ticket has been disqualified from this election cycle for failing to complete "the orientation for all Executive candidates" and "the mandatory diversity education" requirements by their respective deadlines as outlined in the Executive 2019-2020 Candidate Packet. Kaden Madson is a junior studying political science who is running with Delaney Horchover and Chandler Blount. Madson is ru... 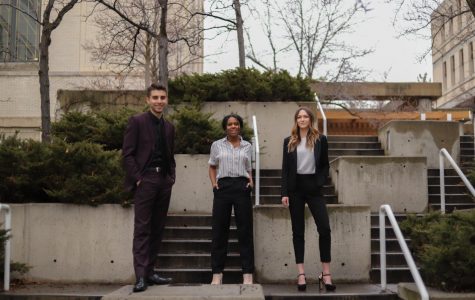 Walker Nasser, a third-year student studying psychology and sociology, is running with Emalee Egelund and Makena Pekarek as his vice presidents. Nasser said he is running because he believes  students need to be heard and “have a community here.” “Whether that be by bringing artists to campus that we love or arguing in Academic Senate for a student resolution, I want to make sure that we ha...