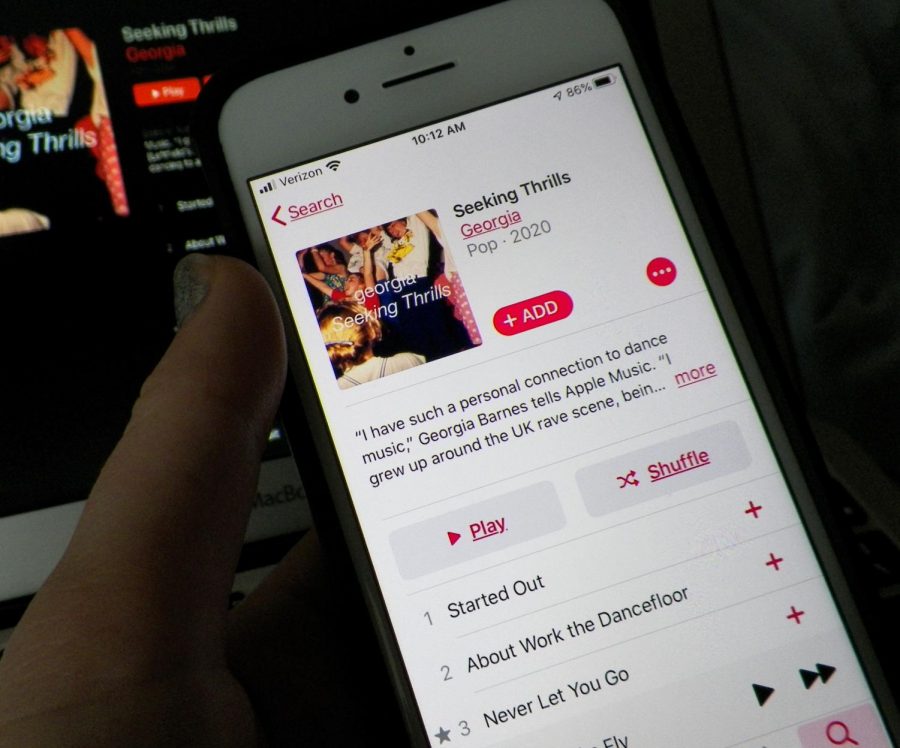 The new year and decade are off to an impressive start within the music industry. Multi-talented U.K. artist Georgia’s electrifying sophomore album “Seeking Thrills” is at the forefront. It’s been a long five years since the release of singer, songwriter, drummer and producer Georgia’s self-titled debut album, but the London-based 29-year-old is finally back and better than ever with a fun, fresh fusion of pop, punk, club, electronic and dance music. Characterized by unifying vocals and lyrics paired with innocuous and carefree yet dark and sultry experimental production, “Seeking Thrills” offers an escape from monotonous, stressful everyday life and a nosedive into the cathartic unconsciousness of the dance floor.

Track by Track
Kicking off the record is the exhilarating club anthem “Started Out,” which is driven by atmospheric synthesizers and an ever-booming bass. It’s impossible to miss the powerful, band-together-type lyrics of the refrain: “We are wicked young fools who behave now / Back in the arms of somebody who saved us.” The following track, “About Work The Dancefloor,” wields a heavier energy with a clearly 80s-inspired instrumental that marries ominous, dark arpeggios with swelling harmonizing synth chords and beautifully bright synth bells.

In comes the pop-punk banger of a third track, “Never Let You Go” — my personal favorite of the record — which, for your needless information, makes me want to go full Jennifer Beals “Maniac” under aggressive strobe lights. The pulsating pace at which this song runs — propelled by crisp kicks, snares and cymbals, matched with Rainbow Road-esque up-and-down arpeggios evident on the chorus — is unbeatable. Georgia’s vocal performance on this track is soft yet striking, gentle yet bold, youthful yet mature — an overcoming of angst and frustration and a true, beautiful catharsis. Lyrics like “although your skies keep changing / I will still be waiting” and “it’s crazy, I’ve given everything to you / So take me, every little breath in you” bring us back to the album’s theme of letting yourself go, becoming one with the music and losing yourself amongst others on the dance floor. While we’re on the note of outstanding vocal performances on this album, I have to acknowledge the fifth track “Mellow” and Georgia’s invariable, dark, rhythmic droning followed by a seductive and slightly sinister Shygirl feature. Both artists definitely “keep it mellow” with a shared flat, drunk and blissfully inattentive delivery over a twisted, wicked and rich instrumental.

If you thought I was skipping over the exciting “24 Hours,” quit kidding yourself — this track is great. Saturated and full of vibration, the production on this song complements Georgia’s hopeful and sanguine lyricism perfectly with lines like “24 hours ago, I saw a light shining in / He said, ‘Before the distance, we’ll begin an ultimate feeling’” and “if two hearts ever beat the same / We could be it.” Things get even sweeter with tracks six and seven, “Till I Own It” and “I Can’t Wait.” Juxtaposed with the previous “Mellow,” “Till I Own It” carries a much lighter and easygoing energy, and “I Can’t Wait” is just as bright and buoyant.

Track eight, “Feel It,” is marked by Georgia’s elated and experimental vocal work over a grungy, static synth guitar riff and a crush-heavy, metallic-type drumbeat. The song is about being “consumed by a powerful feeling,” as Georgia herself puts it in an interview with Dazed, “and the sense of nobody or anything being able to affect or ‘shatter’ it.” If there’s a song to rock out to on the album, this one would definitely be it.

Next on the tracklist is the out-of-body, enigmatic and ethereal “Ultimate Sailor.” Like transcending space and time or entering into a new dimension, this song is otherworldly. The production on this track is extraterrestrial with electronic sounds from all across the board coming into play and a quite large dynamic range contributing to the mood as well. Georgia’s vocals on this track are unconventionally angelic and her lyrics are full of devotion for presumably a love interest or at least an important person in her life. Lines like “I’d be the ultimate sailor / Traveling this world for you” and “I’d jump from the waves in high heels” solidify Georgia’s willingness to do the most for her muse. Reciprocation from said muse comes into question during the tail end of the song when the production takes a dark turn and you can hear Georgia softly, beseechingly and almost hopelessly whispering in the background, “traveling the world to you” in a sort of hypnotic and subtly menacing tone.

The whistling, steam locomotive-sounding street beat on track 10, “Ray Guns,” makes for one of the more experimental pieces of production on the album. I love Georgia’s echoing and encouraging vocals on this song, especially her powerful use of diction on the latter half of the track. Another one of my favorite examples of how Georgia uses her voice on this record is the subsequent track, “The Thrill.” I love the calm, cool and collected vocal delivery that perfectly matches the neon club beat of this song. And there’s no way I can talk about this track without acknowledging the heavy, bouncy beat switch and the corresponding pitched-down, throaty Maurice feature. Ending the album on a fittingly sweet note with “Honey Dripping Sky,” Georgia once again sings of dedication for her muse with a beaming chorus: “For you, for you, for you / I’ll bleed inside.”

Final Verdict
There is so much more to discuss about “Seeking Thrills,” from its insanely intricate production to alternative versions and underlying themes. This album is quite the listen and I absolutely recommend it to music fans of all tastes.