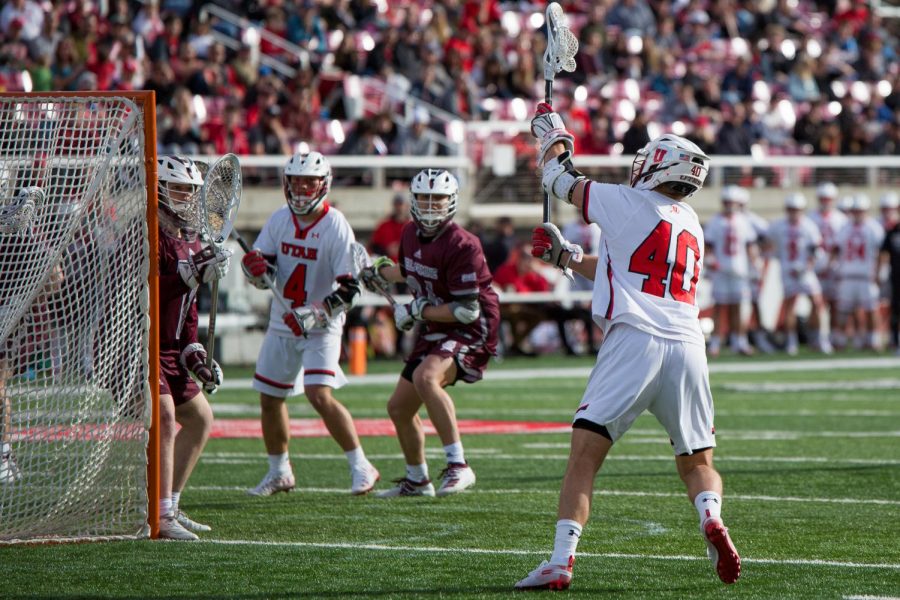 University of Utah Senior Aaron Fjeldsted (40) goes for the goal during an NCAA Lacrosse game vs. Bellarmine University at the Rice Eccles Stadium in Salt Lake City on Friday, Feb. 1, 2020. (Photo by Abu Asib | The Daily Utah Chronicle)

Though University of Utah lacrosse team captain Aaron Fjeldsted has found great success in his sport, lacrosse was not always his first love. Fjeldsted originally played soccer but quickly made the transition to lacrosse. The transition was made easier with the help of his brother and his friends.

“My older brother picked it up with his friends, and then my group of friends picked it up, and soccer was getting kind of boring, so I made the switch and it’s been fun ever since,” Fjeldsted said.

His reasoning for the allure of lacrosse comes in large part from the use of the lacrosse stick.

“You have your own piece of equipment you can customize and make your own with the strings and the different shapes of the head and the mesh. It’s very intricate, so you get a really special bond with the lacrosse stick,” Fjeldsted said.

He also made mention of the strong team aspect lacrosse offers, along with the intricate tactics and strategies.

While this is Fjeldsted’s final year on this Utah team, he feels like the team aspect is really strong at the school. Last season, he ranked fourth on the team with 24 points, and he was second in the assists category with 13. Before he came to Utah, he was named the RMLC third-team all-conference attack and Rookie of the Year when he played at BYU in 2014.

“This is my last year. I really like this team. Everyone works super hard and there isn’t a huge drop off from one guy to the next. It’s a next-man-up mentality,” Fjeldsted said. “It’s a good group of friends and its fun to go out on the field with people you care about. You know about their family, their brothers and sisters, it’s a really tight group.”

With that next-man-up mentality, Fjeldsted believes that this year’s team will have a positive attitude when the pressure is on the team.

“We have one game behind us and everything in front of us. We are taking it one step at a time. We hope to do big things and improve upon the record we had last season,” Fjeldsted said.

While Utah is the only school in the Pac-12 that currently has a men’s lacrosse team, the sport is growing in popularity around the country and is quickly gaining traction in the west. Fjeldsted thinks that this upward trend is due to the excitement and speed of the sport.

“If you watch a lacrosse game, whether it’s at the professional level or the collegiate level, the games are fast, physical and a lot of fun to watch. People see a game or two and they don’t know exactly what’s going on because they don’t know the rules, but they’re having a great time watching it, especially young kids. When they see it, they fall in love with it,” Fjeldsted said.

Last year was the team’s inaugural year, ending that season with a record of 5-10. While this year’s season is still in the beginning stages, with leadership like Fjeldsted, the team will be in a good place to be able to compete with the best of the best.