Rylan Jones: The Drive to be Great 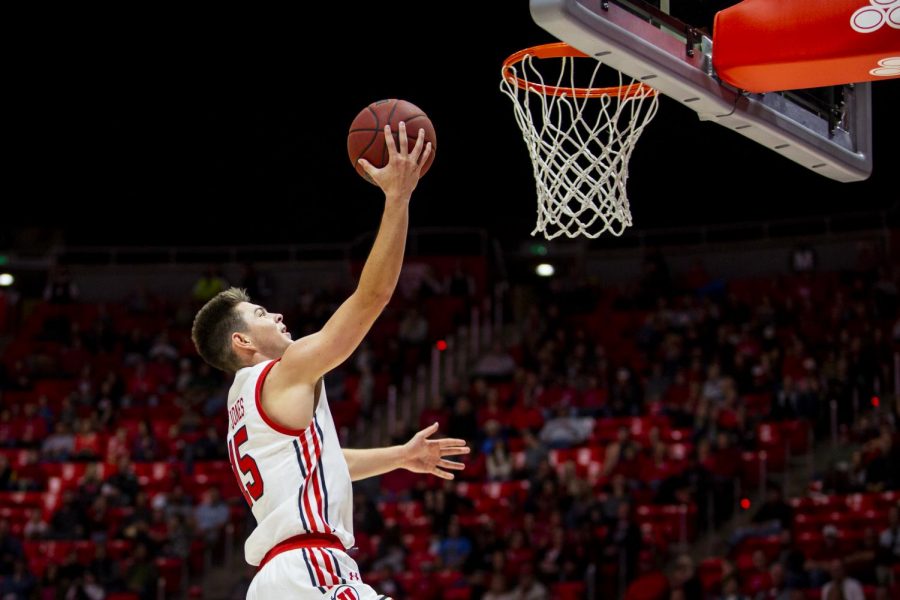 Mental toughness, determination and intensity. These three traits describe Utah’s freshman point guard in the clearest way possible. People were skeptical about the Runnin’ Utes’ lack of experience and leadership before the season, but those skeptics are quickly being silenced thanks to Rylan Jones’ play.

Jones is currently averaging 11 points, 3.4 rebounds and 4.7 assists for the Utes while also leading the team in free-throw and three-point percentages. Many might say he plays like Steve Nash, a guard whose play and leadership abilities make him seem bigger than he actually is. Others might compare his mentality to the late Kobe Bryant ⁠— intensity with a dire drive to win at all costs. Some may even see similarities to the Warriors’ Stephen Curry or the Trail Blazers’ Damian Lillard. Clutch shooters whose ball-handling skills and quiet confidence make him a dangerously dynamic floor general.

Ute fans were able to see each of these aspects play out against rival BYU earlier this season. With 30 seconds remaining in the game and down by one, Jones’ layup would fall to the floor off the front of the iron. Immediately after, Jones fouled the Cougars. He felt sick like he had lost the game for his team.

“I thought the world was going to end.” Jones said “Timmy Allen grabbed my shoulder and said ‘Hey, keep your head up. We’re going to win this game.’”

BYU had made both free throws to take a three-point lead when Jones’ ‘never say die’ mentality kicked into gear. With 18 seconds remaining, Jones pulled up and drained a 3-pointer to send the game into overtime.

“That was crazy,” Jones said. “We got into overtime and got an early lead. I hit a few shots and just felt like I was in the zone. I made the turnaround fadeaway and had a layup in there and just had a short term memory and just tried to stay in the moment.”

“My dad instilled [mental toughness] into me since I was little,” Jones said. “You can miss a lot of shots but it’s all about short term memory. I just try and do a good job of having short term memory. You’re going to make mistakes, but it’s important to not let one become two.”

This wasn’t Jones’ first time making a major statement while playing basketball in the state of Utah. In 2018, he was awarded Utah’s Mr. Basketball along with Utah’s Gatorade Player of the Year. His favorite accomplishment though was going undefeated with Olympus High School and winning state during his senior season.

“It was pretty crazy to be named Mr. Basketball alongside so many other great players to win that award,” Jones explained. “By far my favorite memory though was the 27-0 state championship game. It was an amazing feeling and the way we did it was great. I was with my best friends and it was the funnest four months of my life.”

Mental toughness is important to have on the court, but Jones seems to be a bit more relaxed when he’s off the court. Being more relaxed doesn’t mean that he stays away from basketball though. A typical day off for him includes getting some breakfast and finishing homework before getting into the gym to shoot. After getting his shots up, Jones comes home and enjoys spending time with his family and letting his body rest up. And if there’s a game on that night, there’s a good chance he’s watching it.

Basketball is in Jones’ blood. From the time he was young, Jones has shown promise and an ability to lead his team to victory. His game-changing mentality and unrivaled determination will open many doors for him in the future. Some may look at his physical traits and doubt, but if there is one person to overcome all odds and prove the doubters wrong, it’s Rylan Jones.