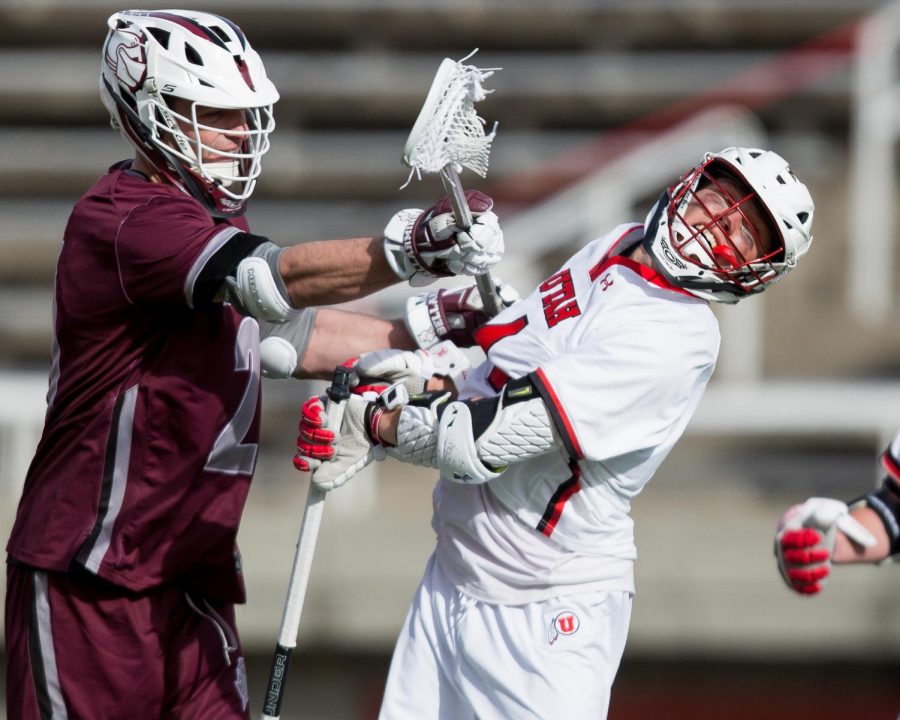 University of Utah player is fouled by an opponent during an NCAA Lacrosse game vs. Bellarmine University at the Rice Eccles Stadium in Salt Lake City on Friday, Feb. 1, 2020. (Photo by Abu Asib | The Daily Utah Chronicle)

This spring season is a big one for a number of the University of Utah athletic teams, but one team is gearing up for what is set to be another historic year.  The men’s lacrosse team is in their second season competing at the Division I level, and they saw a lot of success during their inaugural 2019 season.

Last year, the Utes established the first and only Pac-12 lacrosse team. In their first season, the Utes went 5-10, which is the second best record for a first year program.

On the forefront of building this new team was graduate transfer Jimmy Perkins, who came to the U from Robert Morris University and played on the team there for two years and redshirted two years, granting him graduate eligibility to play at the U.

Last season, Perkins, who plays attack, was tied for second on the team in goals scored with 24. He also contributed seven assists and had the third most points on the team with 31.

Perkins, along with head coach Brian Holman, spoke on the team atmosphere and how they encourage the players to try their hardest every day as a team.

“The program starts with the pillars. They are the foundation of the program, and they are a lot more than just words to us — they are calls to action,” Holman said. “Humility, honesty, trust, passion, gratitude — we don’t just talk about them. We try to exude them and live them on a daily basis.”

Not only do the players and the coaching staff live these values both on and off of the field, they incorporate the words into their lifestyle and have conversations about them each week. It is crucial that every team member accepts these ideals and actively works to make them both a part of their game, but also their lifestyle.

“One thing we really focus on outside of our pillars is toughness and togetherness,” Perkins said. “We have a lot of talent, but it’s not going to be one individual guy that’s going to get it done, it’s the ultimate team sport, so just sticking together when times get tough.”

As for the team this year, the players are more established, and most of them have a season of DI lacrosse under their belts. The coaching staff is excited to begin growing the players into a solid second year team.

There are many factors that go into building up a team, and the Utes learned a lot last year in their first season.  With a strong coaching staff and willing players, however, these changes will be easy and they will push the team forward into yet another successful season.

“It’s reflecting back on the things that we learned last year and trying to work on those things and put them into play this year,” Holman said. “We lost a lot of games in the second half of the game, and we didn’t win a lot of face-offs, which is a critical factor in the game. If I could just focus on one thing that might help us be just a little bit better, [it’s] that we are capable of playing more players.”

Now that the team has set their personal and team goals, they are ready for the new season and the challenges that will come with it.

The typical pressures of getting a new team up and running and then keeping the team going year after year do not exist with Holman. He is all about the togetherness of the team and allowing the players to learn and work together as they see the successes and failures that the team will face this upcoming season and in future seasons.

“Pressure is self inflicted, and I don’t want my team to feel that, I certainly don’t, and they know that I don’t have any fear in general,” Holman said. “At the end of the day, this is a game that we are playing and all of our guys play lacrosse for a reason. If you asked them, they’ll all tell you it was just so much fun. That’s what we are trying to create here — an environment where, yes, we want to win, but there is a way of winning the right way.”